The top-ranked USA women’s indoor volleyball team, which finished 5-0 in Olympic pool play, will play fifth-ranked Japan in the quarterfinals on Tuesday (August 16). In this scouting report, Art of Coaching contributing editor Mas Shibata takes a detailed look at Japan. 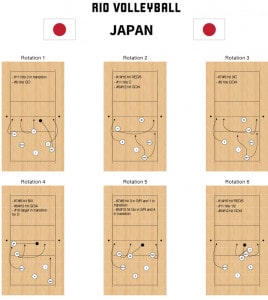 Offense - Rotation Notes
Rotation 1: Setter right back
In set 1, lefty opposite Nagaoka (#1) sprinted from the left sideline to the right sideline to attack, allowing OH Saori Kimura (#3) to stack on the left side to attack the “Go” set. Nagaoka was primarily a line-side attacker. Kimura’s shot of preference was a sharp cross-court attack.

In sets 2 & 3, opposite Sakoda (#16) replaced Nagaoka. Instead of stacking the attackers to the left side of the court, they split their attackers with Kimura (#3) passing from the right side to attack the “Red” set. Sakoda attacked the “Go” set in serve receive. Both attackers primarily hit high seam deep cross court toward the corners.

Rotation 2: Setter right front
The two attack patterns in this rotation were similar to rotation 4. When the front-row attackers split, the back-row opposite hit the “Pipe.” Middle Araki (#11) attacked her slide sets high seam to the cross-court corner.

Rotation 3: Setter middle front
In sets 2 and 3 when Ishii (#12) was replaced, Brazil targeted outside hitter Kimura (#3) in serve receive. As a result, back-row opposite Sakoda (#16) was set often with the “D.” Her shot of choice was mostly a high seam cross-court deep corner attack.

Rotation 4: Setter left front
There are two primary attack patterns in the two-hitter rotations for Japan. When the outside hitter and middle blocker both run sets in front of the setter, the back row opposite hits the “D.” When the outside hitter runs the “Go” and the middle blocker attacks behind the setter, the back-row opposite hits the “Pipe.”

Rotation 5: Setter left back
Japan split their hitters and ran some more balanced playset combinations by having the middle run some 3’s, 1’s and A’s. They keep their offense spread by running Go’s and Red’s in system and modifying them to 4’s and 5’s in out-of-system situations. Middle Shimamura (#9) hits primarily in front of the setter running 3’s & 1’s; middle Yamaguchi (#7) hits behind the setter running A’s, B’s & C’s.

Rotation 6: Setter middle back
Japan split their hitters and overloaded their attackers to the left side by running a Go – 3 – Red playset 6 out of 7 serve-receive plays. 50% of the sets were “Go” sets and 50% were “Red” sets. They did not set their middle in serve receive in this rotation.

Click here to watch the USA vs. Japan live stream