Many years ago, Greg Giovanazzi, who was Terry Liskevych’s first assistant coach for the U.S. women’s Olympic bronze medal team in 1992, made the following observation:

“The U.S. is the only international women’s team whose left-side hitter is also a primary passer.” 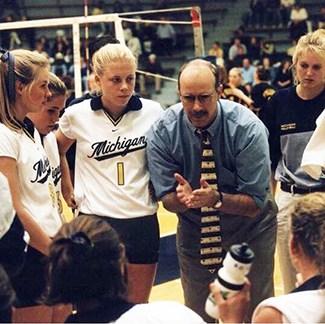 The top teams at the time were Cuba, Russia and China. They all used formations that limited the serve-receive responsibility of these critical players. The Russians went so far as to start their outside attackers at the net to completely protect them from being served. They were paid to hit, not pass.

Giovanazzi, a well-liked and well-respected coach who died in 2012, made the comment at a meeting of USA advisors in 1994. The remark passed without any discussion. However, it struck a chord with me and has affected my serve-receive philosophy ever since.

Before I go further, let me present a brief history of serve-receive formations in the USA women’s program. In the 1984 Los Angeles Olympics, the USA team, coached by Arie Selinger, followed the Asian model and passed with 5 players. When Liskevych took over the program in 1985, we started out using 5 passers but soon switched to a 3-person pattern. Our 2 left sides and opposite took every ball.

Three-person serve receive allowed us to hide our middle blockers in the back row. It should be noted that there were two big differences in the game back then that made serve-receive very different:

Now, I’m not claiming that we introduced 3-person serve-receive to the women’s game. (The men’s team was already using just 2 passers.) But this was a first for the USA women, and I believe they have passed with 3 ever since.

Why is this important, and what does it have to do with Gio’s observation? Well, the assumption has always been that the best serve-receive pattern is the one that produces the best passing numbers. Is that valid? My answer is … maybe!

Let’s think about why the great teams from the past protected their left-front hitters. I’m sure a big part of it was to allow them to focus on their primary responsibility, which was to attack from the left side. To emphasize that point, let me again quote Greg Giovanazzi:

“The garbage always gets tossed to the left side.”

With that in mind, I believe that the best serve-receive formation is the one that produces the highest hitting efficiency. That may mean taking some of the passing load off your primary front-row attacker, even if it negatively affects your passing numbers.

So, rather than blindly doing what everyone else is doing, I suggest you stat the hitting of your left-front attacker and compare how well how he or she does when handling the serve vs. not handling it. You may find the information useful in designing your serve-receive pattern.

Don’t be afraid to go against the conventional flow. 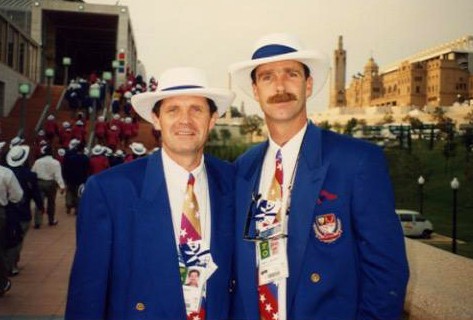 PERSONAL NOTE: In addition to being on the bench in 1992 at the Barcelona Olympics, Greg Giovanazzi was a standout outside hitter for UCLA, a USVBA All-American and a former teammate of mine with the Outrigger Canoe Club. Greg was a great competitor who always had a smile on his face and a kind word for anyone who crossed his path. He was loved by everyone who knew him and was taken from us far too early. We miss you, Greg, and so does volleyball.

Jim Iams was an assistant coach to Terry Liskevych from 1985-88 for the U.S. women’s Olympic team and an advisor for the ’92 and ’96 teams. He was a head coach collegiately from 1989-99 at the University of Georgia, where he compiled a 242-118 record and led the Bulldogs to seven NCAA tournament appearances.