Bret Almazan-Cezar, Head Coach of Archbishop Mitty High School in San Jose, Calf., has led the Monarchs to five state championships and finished with a perfect record twice in his 14 year-career. The Art of Coaching Volleyball had the opportunity to step into his practice to take a look at his team and his coaching style. 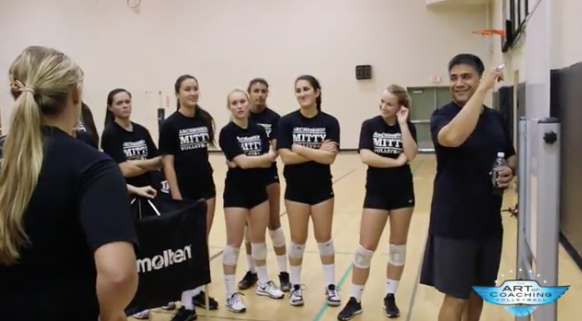 Here are some take aways from the day:

Getting to Know Your Players Helps You Be a Better Coach

As Mitty Coach Bret Almazan-Cezar explains, one of the keys to being effective as a teacher and coach is to build strong relationships with your players.

Sustained winning involves taking an even-keeled approach to ups and downs. Celebrating is a good thing, but it should be genuine and not “rah-rah.”

Creating a Sense of Urgency with the “7 Nothing” Drill

This game is a great way to inspire players to go for every ball, no matter how difficult it may be. Here’s a look:

Ultimately, the decisions rest with the coach, but Almazan-Cezar says it’s important to get input from players so you can create an atmosphere that works for the entire team.

Consequences Have a Purpose

Almazan-Cezar doesn’t overdo consequences in practice, but he does use them as a reminder of what the standard should be. Here’s what he says about them:

Look Through the Net

A big part of playing good defense is seeing what the other team is doing. Almazan-Cezar says players often focus too much on the ball and not enough on what’s going on “through the strings."

In the Mitty gym, the emphasis is on playing first and then, when necessary, breaking things down into drills. Almazan-Cezar draws an analogy with math. If you can do a problem in your head, no need to break it down. If you can’t, take a step back and work on the specific steps.

Almazan-Cezar has his players do regular weight workouts. Here’s what he says about his weight-training philosophy:

The drill that you’ll see here is one that Mitty uses to speed up its transitions. The setter sets the middle off a pass, then gives the same middle a different set off a ball tossed by the coach, which simulates a dig.

Video as a Teaching Tool

With phones and iPads, it’s getting easier and easier for teams to shoot video, and Almazan-Cezar says video is a great way for prepping players on the tendencies of opponents.

Serving Under the Cart

Mitty works on low-trajectory serves by having players aim for underneath a ball cart. It isn’t easy, but it offers a great challenge and encourages players to hit flat and low.

Character on and off the court is what Mitty is looking for in its volleyball players.