TGfU as a coaching approach & the presenter bias

The Teaching Games for Understanding (TGfU) approach used in physical education settings has also (in some cases more than others) been used by coaches in developing players and teams in sports settings (development and competitive).

I’ve been using the TGfU, or a very close approach to its original format since 1995. I first used this approach in a sports school in Brazil while teaching soccer and volleyball to children and teenagers, then in Physical Education classes also in Brazil and finally I started to use the approach in my coaching career which started in Brazil, currently I use it for developing a NCAA Division I volleyball team at Louisiana Tech University where I work as their head coach.

For the past 9 years I have had the chance and the privilege to work inside and be part of the volleyball coaching community in the United States. This opportunity has allowed me (a TGfU practitioner) to be an insider and have the chance to observe and listen to a significant number of volleyball players and coaches in their playing and coaching environments and reflect on the constraints that players go through when having the opportunity of learning “how to make appropriate decisions” and the constraints on the coaching behavior as the coaches talk about why to give or not give the players voice and opportunities to learn how to make their own decisions and to be creative in fixing game needs, creating new scoring or defensive on and off the ball movements; tactics and strategies, during the game while they are playing it or for the game when they are planning for it or assessing it.

One of the things that I do to keep developing myself as a coach is to study how players are successful in their on the ball and off the ball game in any type of sport from their beginners to the highest competitive level, from volleyball, to soccer, to tennis, to basketball and others. What I’ve noticed is that in all these sports, the best and the worst results come from effective or non-effective decision- making that players make individually and as a team. All these decisions relate to “on and off the ball movement choices” and ‘tactical and strategic choices’ that players create or follow from their coaches.

I’ve seen coaches making choices for players and I’ve seen coaches allowing players to make their own choices. I’ve seen success from coach-centered (CC) teams, from player-centered (PC) teams and from teams which coaches balance the PC and CC approaches. But in all these cases, the common feature is that when the game is on, what really stands out is the final product of the players choices, the players are really the ones making choices, either to follow a strategy made by the coach or to create a new and unexpected play set, but the players are the ones who before any “on or off the ball movement” are making the choices.

All of these choices are related to one of the phases of the TGfU approach that is found in any game, the making appropriate decisions phase. During this phase the players (the actors/actresses) have to make appropriate decisions on; what to do, when to do, why to do, and how to do. All these choices are based on timing, space, opposition, offense or defense needs, all of this systemically making an impact on the decisions a single player makes for her/him which will impact the actions and decisions of the team and results. 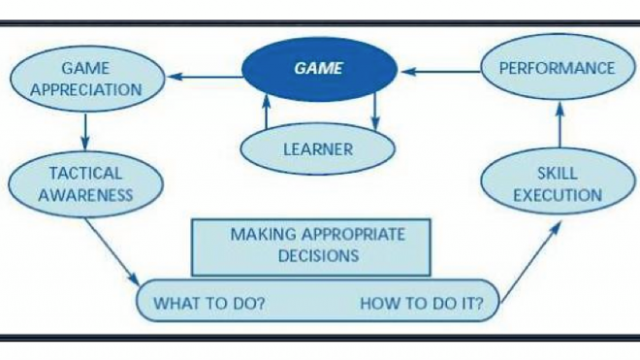 Because I consider this phase to be the most important one in games and we can find it in the the TGfU approach format, this presentation is based on learning aspects that can emerge from it and how coaches can with some simple pedagogical tools, multiply the effectiveness of this phase.

This is the phase that the coach responsible to administrate the practice can create opportunities and allow the players to be the first ones to try to come up with solutions and, therefore, place the player (actor/actress) in the center of the learning and development, or in the higher level, in the center of the performance process.

The “MAKING APPROPRIATE DECISIONS” phase is visited by the players and teams constantly and repetitively when performing to learn, train, and even more in competition, when they have opponents bringing on the ball, off the ball, and tactical problems to them.

This is the phase of the learning process where the effective learning starts to happen and, when it happens, it is because the players have become efficient in making fast and effective choices of: what to do, how to do, when to do, and why to do.

In my opinion, it is in the “MAKING APPROPRIATE DECISIONS” phase that lies the quality of learning, development, and performance in any sport or task. It is here that coaches can really make an impact in the players’ performance, by allowing them to learn how to make appropriate decisions by themselves with exchange of ideas and choices. This process can be done in individual sports or in team sports.

This session is built to share from a practitioner’s point of view, examples of;

Data was collected during practices and matches administration by being an actual coach or an observer.
Observations and notes emerged from:

Practice Administration with the TGfU Approach

When administrating a practice within the TGfU approach coaches created or were advised to create a practice environment that would provide chances/opportunities for players to go through the making appropriate decisions phase frequently and having the chance to start learning to assess the needs of the game and make choices on their own. The goal was to try to create opportunities for a high number of explicit repetitions of making decisions/choices.

To provide this opportunity for players to create and take ownership of their performance the following pedagogical tools were used:

These options were part of what was thought to be needed to make the players become effective in problem-solving. With these 3 pedagogical tools, players seem to start to be more reflective about their actions, but they didn’t seem to achieve the highest point of ownership of their performance just because of the facilitating tools above. What was lacking was intentional tactical creation or change coming from the players. These pedagogical tools seemed to be not enough to create effective intentional creative and decision-making players within the practice or match environments.

Constraints of Practice Administration within a TGfU Approach

The pedagogical tools cited before did not seem to be enough to create effective intentional creative and decision-making players within the practice or match environments. For some reason, the intentional self-start action of taking control of choices in the game was not explicit. By observing players’ behaviors, listening to them, and reading their game analysis some constraints seemed to emerge.

the conversation and decision making too often. These players were taken by others as leaders. Actually, leading was not the case, as these players were the ones who, most of the times, had a harder time thinking broadly about choices.

Reflections on the content of the observations above started to unleash the following questions:

What are coaches doing when there is a lack of quality in performance in practice?Points identified as reasons for the constraints include:

Coming from the players;

The coaching approaches to what the players have been exposed to in their beginning years can also have a significant impact in how players relate to the freedom of creating and problem-solving of a player-centered approach.

The environment where the players learned or did not learn during their life history can have a significant impact on how they relate to the freedom and responsibilities that a player-centered approach affords.

Coming from the coaches;

The environment where coaches come from and from which they learned their coaching ideas during their lives can have a significant impact on how they relate to the freedom and responsibilities that a player-centered approach affords to players and may have difficulties accepting to share performance building responsibilities with players, even though this action can be valuable to the development of the human being and the player all together. Who would not want to have in their teams players who are knowledgeable and confident to make appropriate decisions/choices in practices and matches most of the time? Which coaches would not want players in her or his team who can build success often? But for these opportunities to happen coaches have to share responsibilities and not be the owner of the truth all the time.

Games are complex and it takes a group to solve game complexity in action, the points are being disputed and time and tactics from the opposing team are also constraints.

As the first TGfU chart shows below, the actor/actress (learner-player) is the one who will always relate to the game, before their coach, or commentator, or fan. Therefore, it is important that they learn how to learn and how to assess, create possibilities, and change the game for their competitive benefit.

The pedagogical tools cited before were practice content and options of what was thought to be able to make the players become effective in problem-solving. With these tools, players started to be more reflective about their actions, but they didn’t seem to achieve the highest point of ownership of their performance just because of the facilitating tools of the examples above.

The game-like exercises, the rules implementations/changes/adaptations, and the questions seemed to be not enough to really engage players to make significant decisions on tactics and strategies of the game and build options on the ball and off the ball about what to do, when to do, why to do and how to do.

Players Taking More or Some Ownership

The taking ownership of their performance and thinking tactically, the pursuing a different game, the game changes, all of these came when:

When observing the players’ behavior and being among them as they voice their thought processes about choices of; what to do, how to do, why to do and when to do. It became clear the observation of some positive outcomes.

The outcomes generated in the process of allowing and creating situations for sports players to participate in the detection of game needs (skills or tactics) in the process of creating solutions for different game situations as they go through the TGfU model first developed by Bunker and Thorpe (Bunker D. & Thorpe R., 1982, Bulleting of Physical Education, 18:1, 5-8) could:

Thank you for your time.