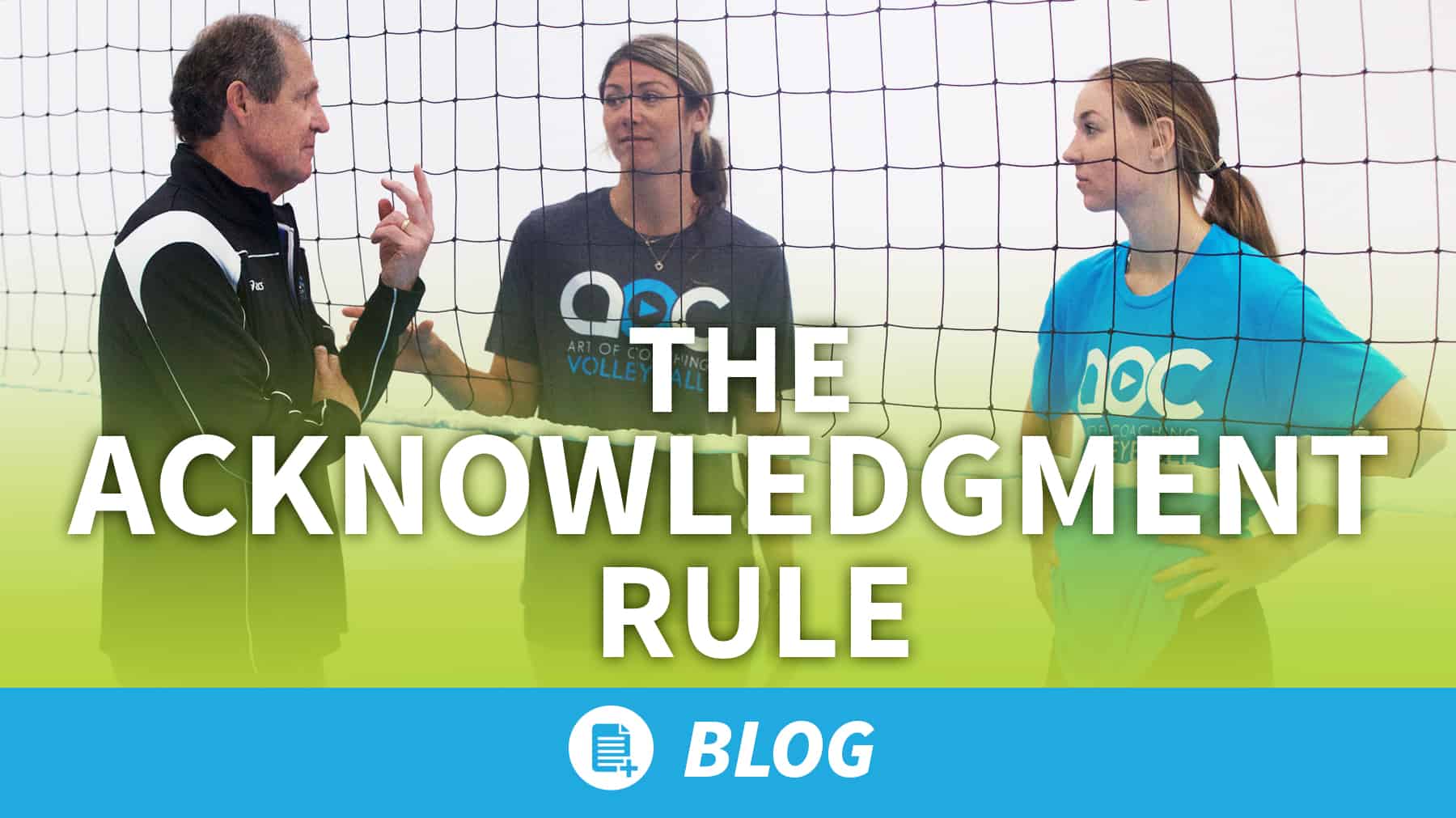 The Acknowledgement Rule has been part of my program since the early 1980s. It’s one of those simple tools that manages to solve a lot of problems. Without it, or something close to it, the shaping of trusting behaviors is very difficult.

Here are 6 keys to the rule:

Let me tell you about a brief episode from my coaching career that led to the creation of the Acknowledgement Rule. An athlete on my team was afflicted with “pessimism disease.” Virtually every time she made an error in practice she would frown, pout and grow silent. I’d often veer from my intended course and walk toward her, quietly providing some positive reinforcement and instruction as I passed her. But inevitably she’d leave me marooned on my coaching island by saying nothing in return, providing no eye contact, and continuing her straight-ahead glare.

For several days, it was my perception that she couldn’t hear me. After my first attempt to gain her attention failed, I would repeat my comment using a louder voice. Still, no response. Finally, on the third attempt, I would go louder and include a pinch of frustration (which was already building and didn’t need to be manufactured).

“HOW ABOUT CREATING SOME BALANCE IN YOUR DEFENSIVE STANCE!”

At this point, she would spin toward me and respond, “I HEARD you.”

Well, how was I supposed to know? Nothing in her body language provided any clues. At that very moment, I decided that this particular form of communication had seen its last day in my gym. All I needed from her was, “OK, Coach – got it.” Or a slight nod of the head in my direction, accompanied by a little eye contact. It would be nice to hear, “Yeah, I’m being pretty selfish here.” But I didn’t get any of those types of responses.

My players learned over time that there was an additional underlying reason for The Acknowledgement Rule. I was looking for “clean air.” I wanted our players to communicate as a team in an environment governed by the principles of The Acknowledgement Rule and free from meaningless jingles like, “Come on, guys, let’s pass the ball!”

Ultimately, I wanted them to “listen” to the match and adjust to what they were hearing and seeing. I stuck by this rule for more than 35 years, and it worked. I think it will work for you too.