Stanford women’s volleyball coach John Dunning, whose five NCAA titles are second all-time in the D1 women’s game behind the seven won by Penn State coach Russ Rose, announced his retirement on Monday afternoon, a little more than three weeks after his Cardinal won the 2016 championship. In 32 seasons as a collegiate head coach (16 at the University of Pacific, 16 at Stanford), Dunning, 66, compiled an 888-185 record for an .828 winning percentage. 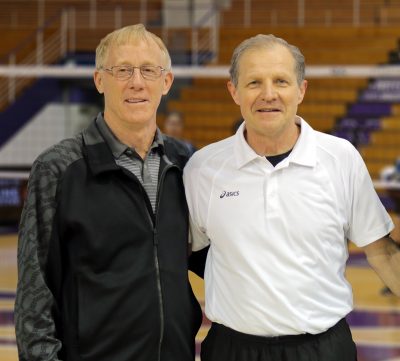 Here is a tribute to John written by his longtime friend and colleague Terry Liskevych:

John Dunning began his volleyball coaching career in 1977 by sleeping in his car while attending a clinic in Stockton, California. I know this because the clinic he attended was mine. I was the head women’s coach at the University of Pacific, and John, a former high school basketball player and college golfer who was teaching math and coaching basketball at Fremont High in the Bay Area, had been asked to take over the school’s volleyball team. At the time, he had no background in the game, and he later found out that he wasn’t the school’s first or even its second choice.

John accepted the offer and then did what he always does: jump in with both feet. He began studying, learning and preparing. He didn’t want to be just a volleyball coach. He wanted to be a very good volleyball coach.

The fact is, he became a whole lot more than that. His January 9th retirement from Stanford, where he has been the head women’s coach since 2001, came just a few weeks after his Cardinal won the 2016 NCAA championship. It was the fifth title for John, who was chosen the AVCA’s 2016 Coach of the Year. He won three at Stanford and two at Pacific, where he took over for me when I accepted the job to coach the USA women’s national team in 1985.

People may not know this, but before John began coaching at the highest levels of college volleyball, he was a huge success at the juniors’ level. He won a state title at Fremont High and a national title at Bay Club, which he founded in 1980. I think that tells you a lot about his ability to connect with players in all stages of their volleyball development.

As a longtime friend of John’s, I’ve always admired his abilities as a coach, but more important to me is that he makes time for everybody and cares deeply about his players as human beings, not just athletes. He summed up his philosophy on how to treat others in a single sentence in Art of Coaching’s “10 Things I’ve Learned as a Coach” series, saying, “Never act in a way that makes someone you interact with doubt you care.”

John’s players recognize that his concern for their wellbeing is genuine. I recently watched a post-championship video interview with Cardinal outside hitter Kathryn Plummer, who teared up when talking about the respect John shows his players. “He always finds the good in people,” she said.

Similar sentiments were expressed by Cardinal captain Inky Ajanaku, who said: “John is one of the people who will continue to look you in the eye and say, ‘I will never give up on you.’ It’s a very rare thing to have someone who wants you to succeed so much that he will try any method of coaching to make sure you succeed – in the sport and as a person.”

Coaches at top-tier D1 programs have many components to their job, but I think what John enjoyed most was being in the gym and teaching. He has a knack for explaining skills, techniques and tactics, and he also understands that helping your players isn’t about a one-off fiery speech but, rather, a day-to-day trust built through consistent actions.

Another character trait of John’s that Ajanaku mentioned is what she called his “incredible volleyball mind.” I would agree. When it comes to volleyball, he’s a deep and creative thinker, and, certainly, his mind had to work overtime in 2016 during a season that was anything but smooth. A key Stanford starter took a leave of absence mid-season for health reasons, and another starter was lost to injury. At one point during October, the team lost three of four matches and was looking like anything but a title contender. But one of John’s philosophies is to be nimble when the original plan isn’t working, so he adjusted. He scrapped the 6-2 that Stanford was running, switched to a 5-1, moved Plummer from opposite to the left-side and shifted middle Merete Lutz to opposite. Soon after, the Cardinal hit their stride, and two months later they won the school’s seventh NCAA women’s volleyball championship, tying Penn State for the record. John’s five titles are second all-time to Penn State coach Russ Rose, who has seven.

One final thing I’d like to say is that John’s to volleyball extend well beyond his own gym. During the formative years of the American Volleyball Coaches Association, he served as both the president and a board member, and he was always a steady voice of reason. At Pacific, he served as interim Athletic Director while also coaching the volleyball team, and he joined Russ and me in 2011 in founding The Art of Coaching Volleyball, where John will continue contributing as a clinician and via video tutorials on www.theartofcoachingvolleyball.com.

A big focus for John in retirement will be spending more time with his grandchildren, McKenzie and Cole, who are 8 and 10. Family before volleyball. That’s always been the priority order for him.

If John never does one more thing in the game, his legacy will be complete. But I have no doubt that he will do more in an unofficial role – as a trusted mentor to coaches everywhere, all of whom will benefit from his wisdom, experience and ability to educate people about volleyball and life. John may be retiring from the bench, but my sincere hope is that he’ll never retire from the sport.

Terry Liskevych, who retired last year as the head women’s coach at Oregon State, coached the U.S. women’s national team at three Olympics, including 1992, when they won a bronze medal in Barcelona.