The NCAA women’s volleyball final four is here. The semifinal matches will be played Thursday night at CenturyLink Center in Omaha, Nebraska: second-seeded Minnesota (30-4) vs. third-seeded Texas (29-2) at 6 p.m. CT and fourth-seeded Nebraska (30-4) vs. ninth-seeded Kansas (30-2) at 8:30 p.m. CT.

To give you a coach’s perspective on who to focus on and what to watch, Art of Coaching had contributing editor Jim Stone analyze each team. Jim, the former head coach of the Ohio State women’s team and the current head coach of the U.S. Girls’ Youth National team, also shares some thoughts on what coaches can learn from watching each team. 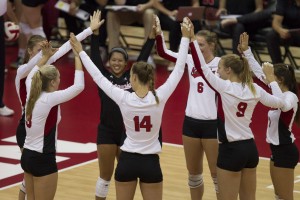 Playing in front of their home fans, the Huskers will be seeking their fourth NCAA title this week in Omaha. Photo from NU Athletic Communications

What coaches can learn from Nebraska: The importance of quality setting and a balanced offense. Hunter does a great job getting all hitters involved and forces the block to defend every attacker and the entire net. 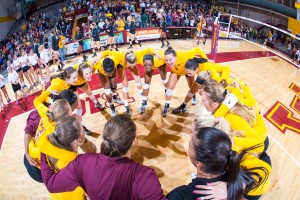 Minnesota is back at the final four for the first time since 2009. Photo from the University of Minnesota Athletics

What coaches can learn from Minnesota: The fast offense that Selinger-Swenson runs puts a lot of stress on the block. This tempo of set to either antennae spreads out the block and really puts pressure on the middles to go from antennae to antennae to defend. The result is often a poorly formed block that Minnesota can exploit. And their tempo remains relatively the same when the setter comes off the net to set. 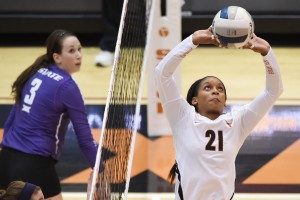 What coaches can learn from Texas: The fact that a team with a 5-7 setter (Collins) can get to the national semifinals should send signals to coaches that the quality of the setting and being a great leader is more important than height. Collins is a very accurate setter, a good defender and a great team leader. Those ingredients are valuable in all 6 rotations. At times, there might be blocking matchup challenges, but Collins will win Texas far more points than she will cost them with her blocking.

Kansas has good ball control and serves well. The Jayhawks can compete athletically with the other teams at the Final Four. The offense must come from the middle hitters (Soucie and Janae Hall) and Payne on the right. This trio has put up high numbers all year. For them to be productive, though, the serve-receive must be spot on. The left-side attack with Tiana Dockery and Madison Rigdon must be effective when the offense is out of system.

What coaches can learn from Kansas: The value of serve and pass cannot be taken for granted. Kansas is solid at both these skills and it allows them to compete successfully.

What to watch for

Bottom line: This will be a very close match that could easily go to 5 sets. I can see either team winning, but I would be very surprised if either team wins easily.

Based on regional final play, Nebraska is the favorite in this match. Nebraska is a little more athletic and a little more skilled at every position. The things that Kansas does well that could allow them to compete: They serve tough and accurate; they receive serve well. They will need to serve very well to the edges of the court and get Nebraska out of system. This can allow their block, which is very capable, to get to the attack. As we mentioned, Nebraska is very balanced offensively. If Kansas’ serve can limit the setting options, they can defend successfully. From the offensive perspective, Kansas must get more points and greater efficiency from the outside attackers.

What to watch for

Bottom line: In the 1985 national championship men’s basketball game, Georgetown was the overwhelming favorite. But Villanova shot 78% from the field and shocked all the experts. This will have to be a similar situation. Kansas will have to be almost perfect to beat the Huskers.

Check out Jim Stone’s analysis of the regional final matches that got Kansas, Texas, Nebraska and Minnesota to the final four.