Alix Klineman had every reason to believe that her path to the Olympics would be in the indoor game. She was the star on 3 California state championship teams at Mira Costa High, a 3-time first-team All American at Stanford from 2007-10 and a member of the USA national team.

But her volleyball bull run ended when U.S. coach Karch Kiraly told her she wouldn’t be invited back for 2016. Tough pill. The Olympics had been her goal forever, and she’d worked like a sled dog to make it happen. Even in elementary school, the tall kid from Manhattan Beach, California, tapped every resource available, asking her second grade teacher (and a former volleyball player), Miss Lapour, to help her practice passing after school so she could play 6 rotations instead of 3 on her club team.

Suffice to say, Klineman didn’t slink off and quit after Karch broke the news. The beach had always been on her radar, and someday she knew she’d give it a try at the pro level. Someday was here.

It’s never that simple, though. Sports isn’t. Life isn’t. Leaving indoor behind was about more than just the national team. It was her career. She’d played overseas, first in Italy, then Brazil, and she was still getting “top contracts, making really good money.”

Unlike the beach, indoor checks are always there, win or lose. Lose on the beach, dinner and rent are on you. 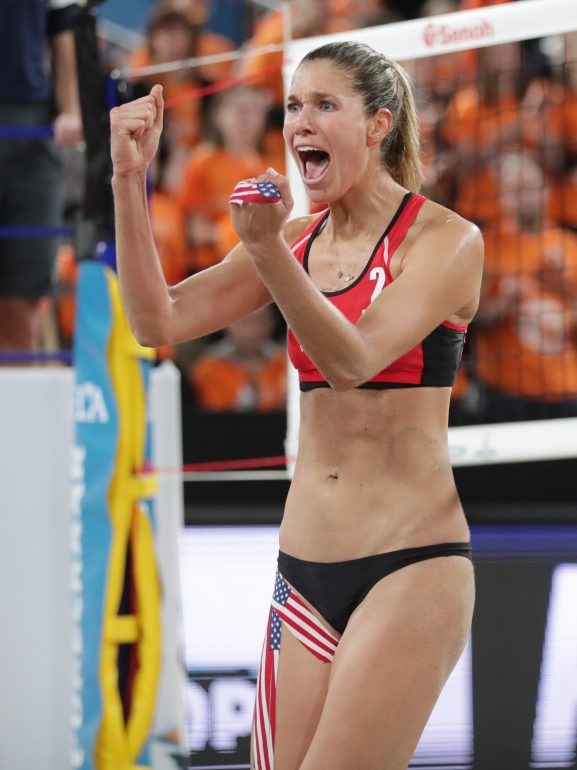 Before the 2017 season, things got even more complicated. Karch called. He wanted her back in the gym. Her first answer was yes, and many people around her – friends, family – thought that was the way to go. The more she chewed on it, though, the more she wavered. Her heart was with beach.

“I wasn’t torn about knowing I wanted to go to the beach,” she says. “But I was torn about the timing. It was hard to know when the right point would be for me to give up my last dream to start a new dream.”

Ultimately, she came to this conclusion: “My best chance of going to the Olympics is on the beach.”

It was clearly a big-picture play, and what’s interesting is that it came via the same line of thinking that went into April Ross’ decision to pick up Klineman as her partner before this season. Ross is one of the best players in the world. She has 56 career beach wins, an Olympic silver medal from London in 2012 and an Olympic bronze medal from Rio in 2016. She could have chosen any number of experienced partners. Selecting Klineman meant going to battle with a player who, despite taking a second and a third last season on the AVP Tour, had never competed in an FIVB tournament, had no international points and has a boatload to learn about beach. But Ross knew that her top goal was gold in Tokyo in 2020, and the 6-foot-5 Klineman was who she thought could help her make it happen.

That decision paid big dividends in early January at the season’s first 2018 FIVB stop. Grinding their way through the country quota, then the qualifier, then the main draw, Klineman-Ross, unbelievably, won every match at the 4-star event in The Netherlands to take the gold. That made Klineman the first player ever in the beach Olympic era to win a full FIVB tournament on the first try.

The reality that this will be a long, challenging journey came 6 weeks later in Fort Lauderdale at the season’s second tournament. Klineman and Ross went 0-2 and finished 25th.

“I know it’s a process,” Klineman said a few days later. “Luckily, I’m at the beginning of it. One of the things I told April when I was trying to convince her to play with me is, ‘I’m going to get better. I’m just starting.’”

At age 28, Klineman is seeking to improve with much of the same vigor that she had in second grade. On a recent afternoon, she met in Hermosa Beach, California, with a food scientist who analyzed her blood to determine her optimal diet. The same week, she was scheduling a meeting to discuss blocking technique with Matt Fuerbringer, a retired beach pro and former USA national team assistant coach who is now an assistant at Long Beach State. And at a recent dinner party, where everybody else was socializing, she spent two hours in a deep-in-the-weeds volleyball discussion that she initiated with Tyler Hildebrand, who was recently hired to be USA Volleyball’s director of coaching for the beach national team.

“I pride myself in being a learner and being open to feedback,” Klineman says. “Everybody needs to keep improving. If you become static even for a minute, people are passing you up.”