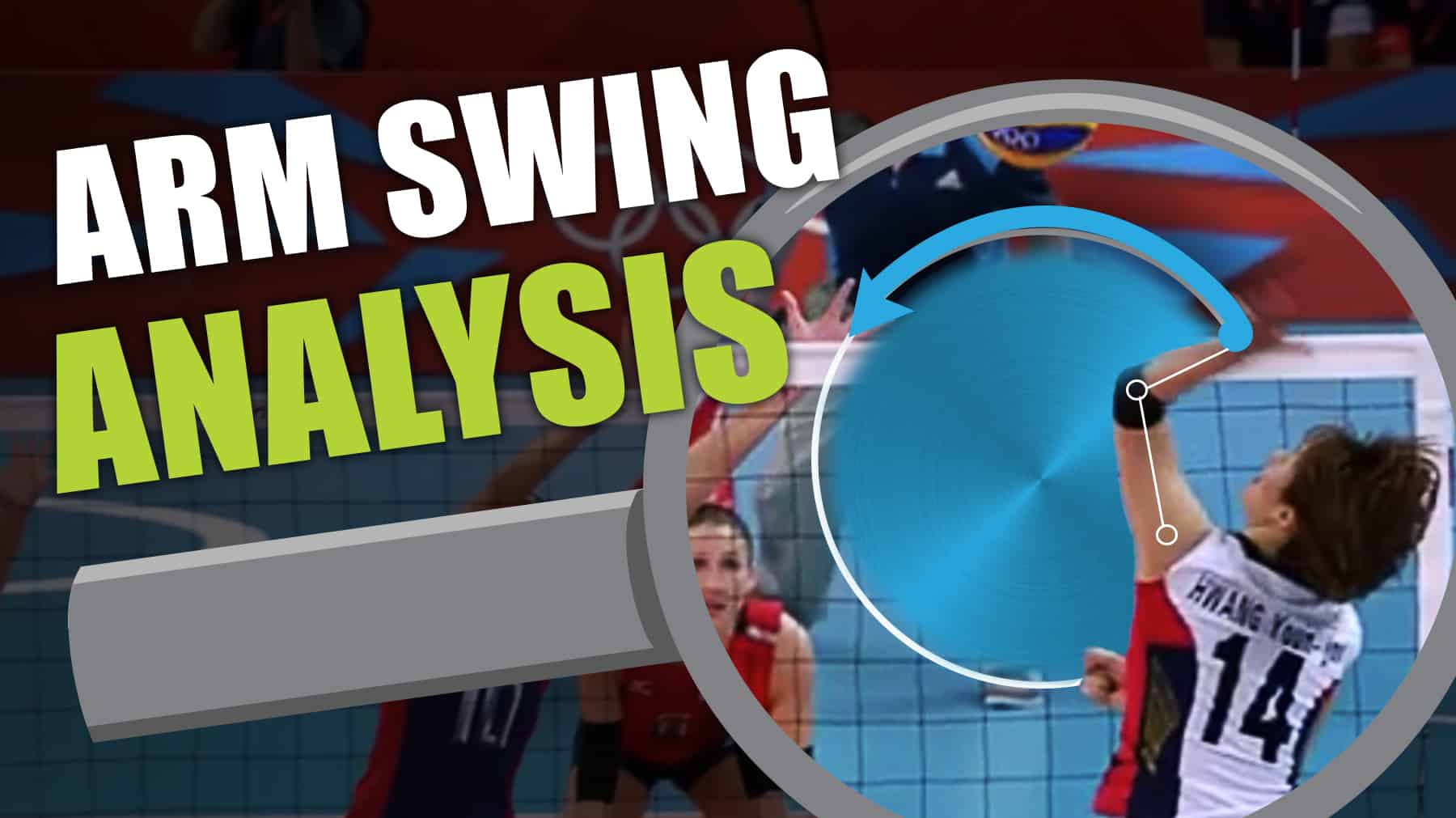 Once the Armswing Load position is reached as illustrated in A Critical Analysis of Attacking – Article 1 – Armswing Analysis, the elbow begins to travel forward and upward pointing toward the set ball leading the arm and hand to contact and the follow through.

At this point in the armswing, are there specific cues or words you use to describe your preferred technique in training the attack? Examples of frequently used words that I have heard used by other coaches are Reach, Snap Your Wrist, Thumbs Up and Thumbs Down to hit around a block. We sometimes use words that are subject to interpretation and do not effectively or adequately describe our vision of the preferred outcome and result.

The video clip of Berenika Tomsia of Poland shows her technique of going from the Armswing Load Position through ball contact and her follow through.

A video clip and photo sequence of Anne Buijs of the Netherlands is presented for comparison and analysis.

Does what we think happens coincide with what actually takes place in the milliseconds before and after the hitter’s contact with the ball?

A photo collage of International players is presented for an analysis of how they actually form their wrists and hands near the Armswing Load Position. The photographs were downloaded from the internet and selected from among hundreds of pictures to focus on the Wrist and Hand Positions of the attackers. The caveat when viewing the photo collage for comparison purposes is that because there is no associated video for these pictures, there may have been some movement before or after the exact moment the Armswing Load Position was actually achieved. 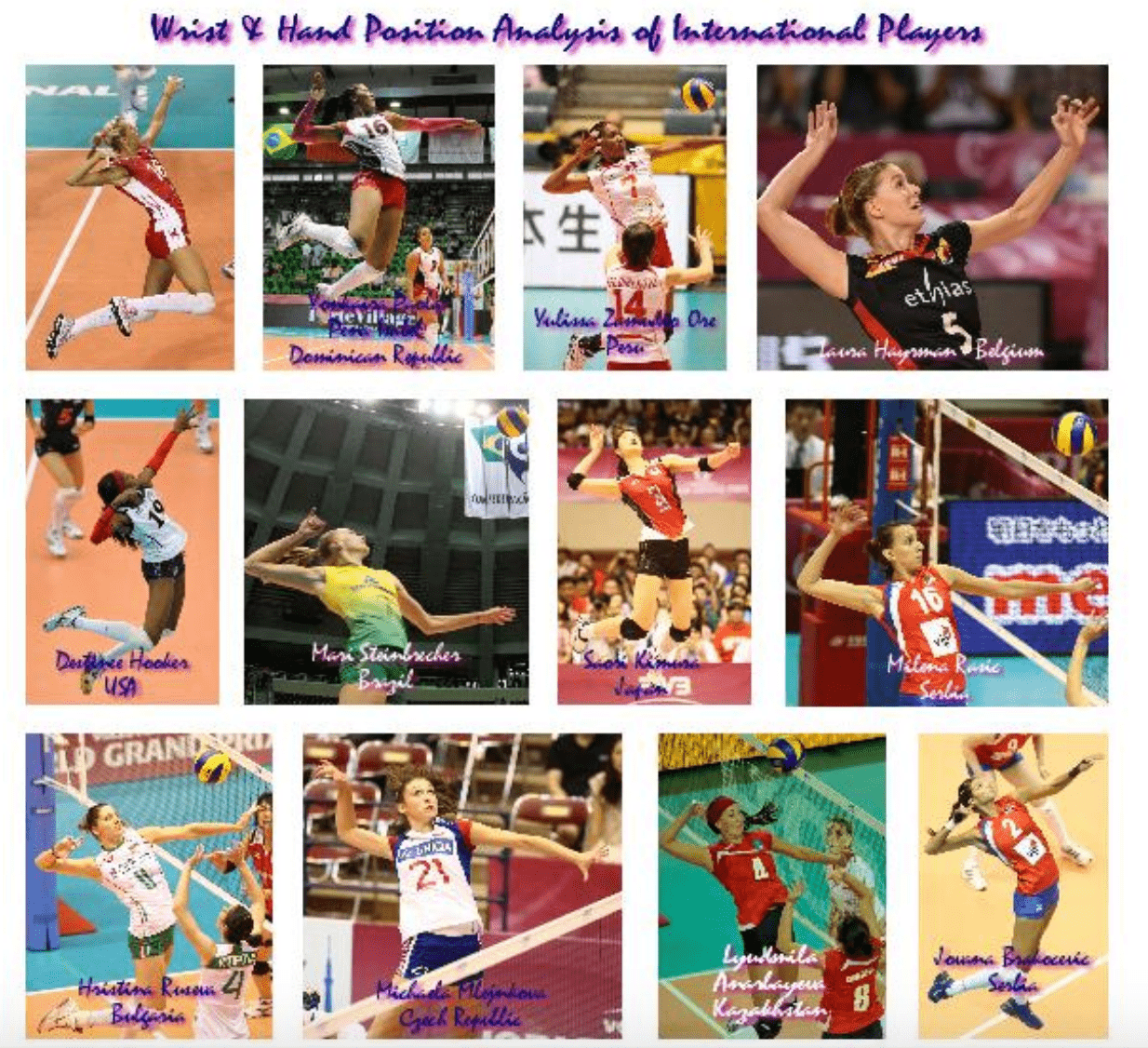 Keeping the focus on just the wrist and hand positions of the hitters, what are your observations and conclusions? Do the photos reinforce your previously held opinions or perceptions of what you would have anticipated to observe? You may even be of the opinion that this detail is an inconsequential element of overall armswing mechanics and do not even address this component.

It appears fairly obvious that there is a multitude of different combinations of wrist and hand positions being used by players when attacking. There are many variations in the position of the wrist. Some are laid flatter with the palms down or facing outward and some have more curvature or angle at the wrist. There are also many variations in the hand position and shape of the fingers of the players. Another detail observed is that there are varying degrees of relaxation or tension seen in the wrists and fingers.

The following diagram illustrates some terminology I will be using to describe videos presented for observation and analysis of hand and wrist movement. 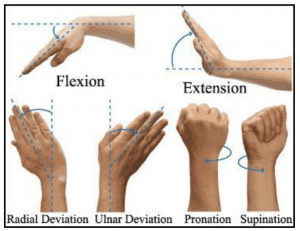 Berenika Tomsia of Poland, in the video clip at the beginning of this article, has what I would characterize as a relaxed armswing, wrist and hand motion or technique with respect to the amount of perceived tension or firmness visible.

Anne Buijs exhibits a firmer armswing, wrist and hand motion when attacking. A side by side comparison of Tomsia and Buijs is slowed for analysis purposes.

The following collection of short videos illustrates a variety of different technical nuances which are used by some other experienced International players.

Jordan Larson of the USA

Lonneke Sloetjes of the Netherlands

Acknowledging the differences, do you detect any commonalities in technique that you feel would be important factors to continue to use or incorporate into your training regimen? Do you perceive there to be any advantages or disadvantages to having a firm versus a more relaxed armswing, wrist and hand motion?

Perhaps, this is where it could be informational to discuss the controversy of the “Wrist Snap” as to its importance and effect in the attacking process.

A slow-motion video of Ekaterina Gamova is presented for observational analysis. This video was selected for analysis as it was the best super slow-motion quality video of an armswing that I was able to find on the internet to study the attack motion.

I would be inclined to describe Gamova’s armswing and wrist as a Medium Relaxed motion, an average between a Relaxed and a Firm hitting technique. The shape of the arm, wrist and hand is somewhat similar to that of Berenika Tomsia’s relaxed armswing, but you are able to see more tension built up in the arms and hands at the Armswng Load Position (Row 1 – Frame 2). It may not be detectable in the photo below, but I was able to see some veins on the back of Gamova’s hand and forearms in the Load Position photo due to increased tension.

You can clearly see the backward “Extension” of the hand in the Row 1 – Frame 3 photo. The photo sequence shows the positions of the arms, wrists and hands throughout the armswing. The photo in Row 2 – Frame 2 is milliseconds before the hand contacts the ball in the Row 2 – Frame 3 photo. The next photo in Row 2 – Frame 4 is when I detected that the ball was beginning to leave Gamova’s hand. My observation and analysis detects a very slight forward “Flexion” of the wrist as you are able to see the back of the hand on the ball as it begins to come off the hand.

The Merriam-Webster Dictionary defines “Snap” using words such as briskly, sharply, sudden and rapid. Do these words describe your vision of what Wrist Snap looks like when you are discussing your opinion? Many people espouse that there is not enough hand contact time on the ball for there to be a wrist snap. Many of the proponents who believe that wrist snap is an important element to incorporate into the armswing mention words such as power, topspin, and contact angle as associated benefits.

Based upon the video and photo sequence of Gamova’s attack, I would refrain from describing the motion as a Wrist Snap. Wrist release or forward wrist flection seems to more accurately describe the motion before contact with the ball.

Watching one video clip of an armswing of one player is definitely not a critical analysis to form definitive conclusions. Some common terminology that I have heard over the years to describe how to hit the Cut Back Shot to the Left and the Cut Shot to the right for a right handed attacker is “Thumb Up” (Supination) and “Thumb Down” (Pronation). I am presenting slow-motion videos of how players actually contact the ball to hit the Cut Back, Straight Forward High Hand Tool or Low Seam shot, and the Cut Shot. As part of your observation and analysis, it may be informational to note if there is a pronation or supination on the follow through for each attack in the three videos.

The next video shows cut back attacks to the hitter’s left, except for the final attack by left handed Hwang of Korea who cut back to the right.

The final of the three videos below shows cut shot attacks to the hitter’s right.

The majority of the hand contacts on the ball for the preceding three videos have been captured in the photo collage below for a closer observation and analysis. 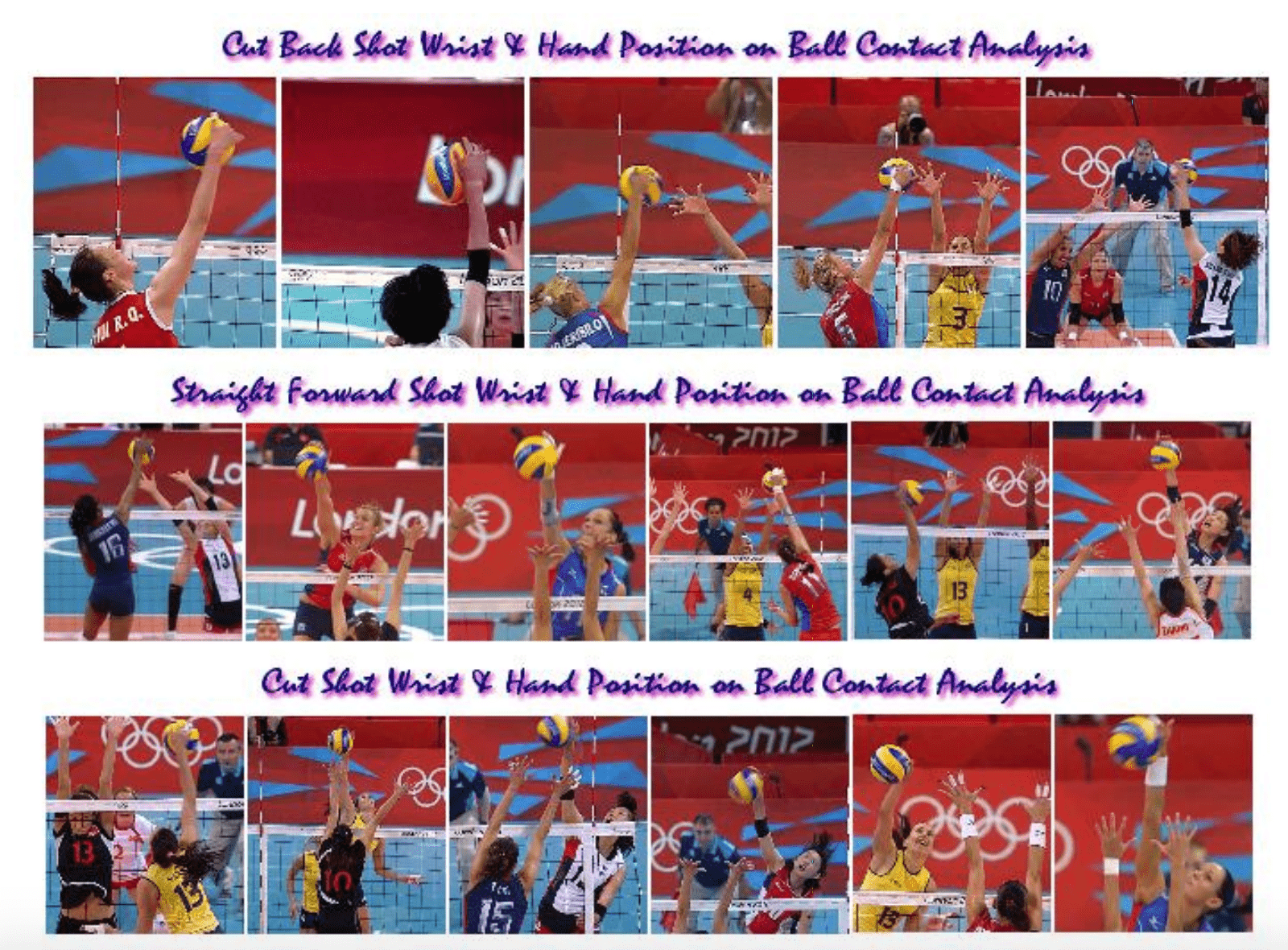 Because I had heard the Thumbs Up and Thumbs Down mantra for so many years, my observations were somewhat contradictory and unexpected. Just as the “Wrist Snap” terminology was not accurately descriptive of what appears to happen, I believe the same could be said for the “Thumb Up” and “Thumb Down” admonition to move the ball around the block. Because the hand is only in contact with the ball for milliseconds, there is not a sufficient amount of time to execute a turning of the thumb in a up or down position to impact the direction of the attack if the ball is initially contacted on the centerline of the ball in relation to the approach angle of the attacker. To move the ball to the left, initial contact with the hand needs to be made to the right of the centerline of the ball. Conversely, to move the ball to the right, initial contact has to be made to the left of the ball’s centerline. The straight forward shot needs a centerline contact on the ball.

My observations on the follow through for the three videos showed that in the cut back shots, two hitters pronated their thumbs downward while three finished in a more neutral position with the palms of the hand facing downward toward the court. In the straight forward attack video, five were pronated and three had neutral hand positions on the follow through. The cut shot video revealed that eight of the eight attacks finished with a pronated hand position.

The results of the three different attack directions with a predominate pronation of the wrist and hand finish leads me to believe that pronation is a naturally occurring phenomenon. Attempts to force a “Thumbs Up” supination of the hand for a cut back shot or even a straight forward shot may possibly have some unintended consequences with regards to the shoulder and elbow. A critical analysis of this subject could be a beneficial exercise for those with an expertise in this subject area.

In an effort to obtain some corroboration as to whether pronation is a naturally occurring mechanism in the armswing motion, research was done in studying the throwing motion of a baseball. Some may arguably feel there is not a correlation between throwing a baseball and the armswing mechanics in spiking the volleyball. For those that feel inclined to believe there is some basis for comparison, a video of the pitching motion of Tim Lincecum of the San Francisco Giants throwing a 97 mile per hour fastball is presented for observation and analysis.

The super slow-motion video clearly shows that there is a naturally occurring pronation before the hand turns over in a supination motion to finish the follow through near the left hip.

Some common traits in this article after the Armswing Load Position appears to be a somewhat moderate amount of wrist flection to contact the ball in different locations around the ball’s centerline to control direction and angles into the court, and a neutral to pronating hand motion on the follow through.

While observing the various video clips and photo sequences for “wrist snap”, the terminology and descriptors I have been exposed to in the past do not appear to accurately describe the action that occurs in the armswing mechanics of a hard driven ball. The term wrist release or forward wrist flexion seems to more accurately describe what transpires.

In regards to the “thumbs up” and “thumbs down” admonition, initial contact location on the ball seems to have the biggest impact on attack direction than follow through movement. Another common component observed in controlling and moving the ball around, over or through the block was a relatively relaxed wrist flection and a controlled release of the hand upon contact. Even the players with a firmer wrist and hand during the armswing motion exhibited a slight wrist action through the contact phase. The degree of the forward wrist flection controlled the upward or downward trajectory of the ball for each specific circumstance.

The videos and photo sequence collages demonstrates that there are many different techniques used by accomplished players from among different countries. The common element in the follow through was a pronation of the wrist and hand. It appears that wrist pronation is a naturally occurring phenomenon in armswing and throwing mechanics.

Whether we elect to continue to teach the same techniques and armswing motions, we can help our players in the learning process by using terms that more accurately describe what is actually occurring or the actions we are striving to achieve.