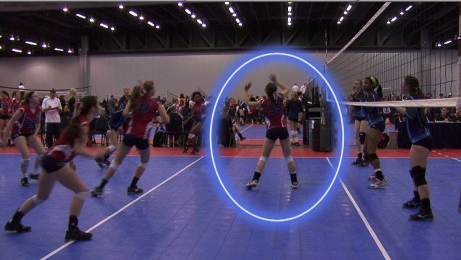 College coaches get hundreds, sometimes thousands, of recruiting videos each day. For all the time junior’s players and parents put in to making these videos, coaches spend a fraction of that time watching them. Some turn off the video after the first clip.

Much like an interview, a recruiting video is a player’s shot at a first impression and no one wants their video turned off after the first clip. Club and high school coaches can play an invaluable role in mentoring their players on what college coaches look for in recruiting videos. Here is a list of characteristics good recruiting videos have in common.

a.  Identifying the player’s name, number in the video, and position

a.  Outsides:  Everything specific to position, whether you are 6 rotation or 3

i.     Serve receive to attack and transition attacking

b.  Setters:  Show as many situations as you can

i.     All play sets you can set.  If possible, show all slides together etc….

c.  Middles:  Lateral movement and how hard you work in transition

i.     Serve receive to attack

iii.     Serve and defense, if applicable.

i.     Serve Receive and Defense

3.  Serving should be included, but not an emphasis

a.  Most college coaches evaluate a player’s other skills first and serving second.

4.  Include both sides of the court

a.  Preferably from behind a baseline, in the shot.

a.  Before the play, or by number at the beginning of the video.

6.  Not every touch has to be perfect

a.  Coaches want to see not only the result of the skill, but how well an athlete moves, so stopping the play right before a skill is executed hinders a coach’s ability to truly assess that player’s potential.

Recruiting videos do not have to be a fancy production. The best recruiting videos include accurate highlights according to the player's position (see #2), are posted to YouTube or Vimeo (or similar website), and sent in a personalized email. If a 6’1 middle who touches 10’3 starts her video with passing and digging reps, a lot of coaches won’t continue watching if they don’t know those stats.  Like a good book captures the reader’s attention from the first line, a recruiting video should capture a coach’s attention from the first clip.