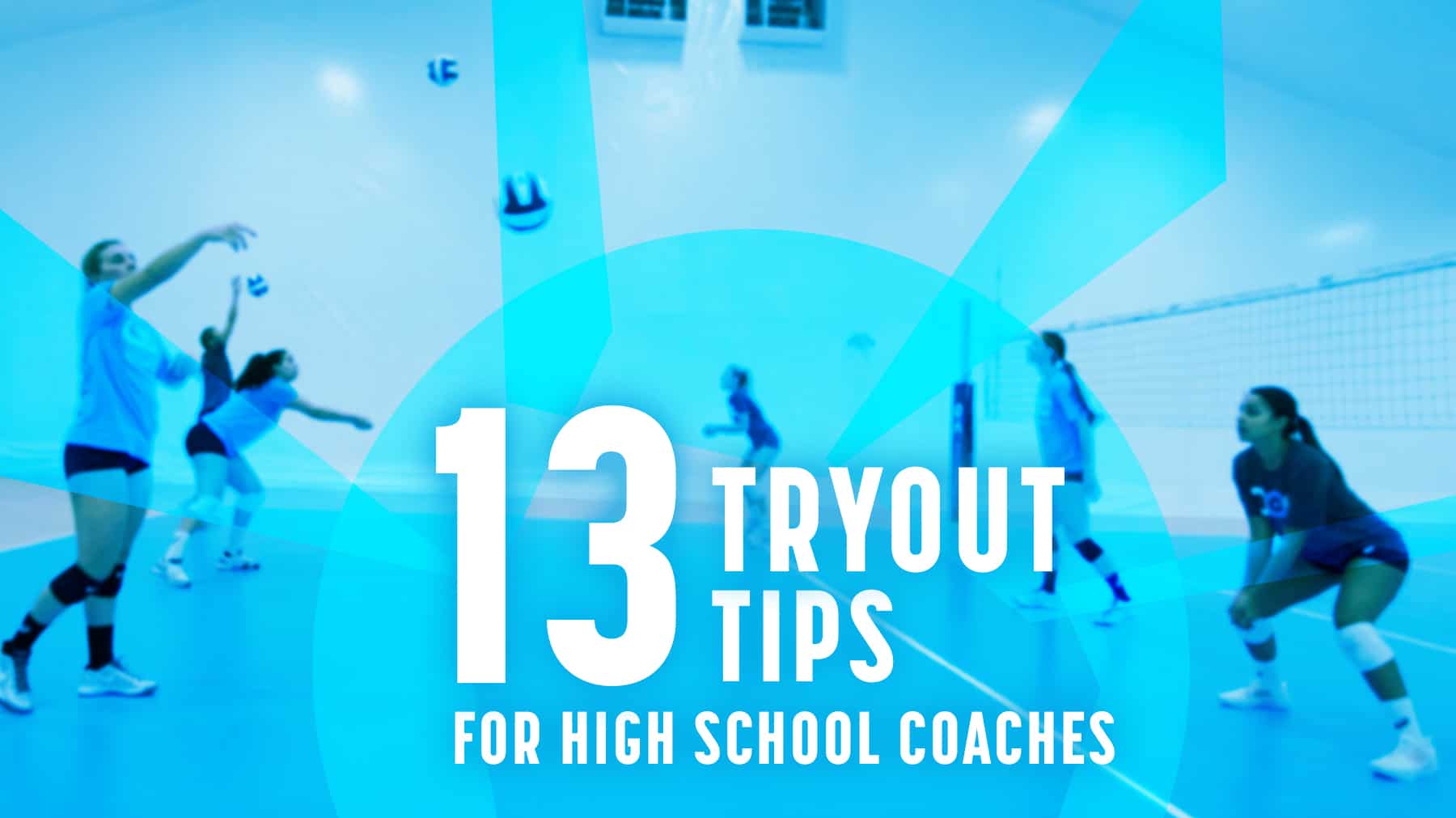 The first challenge of the new season for high school volleyball coaches is running a good tryout, so we asked Tod Mattox, the varsity girls’ coach at The Bishop’s School in La Jolla, California, to share some info about how he chooses his team and how he makes the experience rewarding for all.

1. Define who’s eligible for which teams, but build in some flexibility

At Bishop’s, juniors and seniors have to try out for varsity, but there are special exceptions. For instance, if a student has another primary activity – like dance – she might be allowed to try out for JV as a junior.

2. Create a safety mechanism so deserving players don’t get overlooked

As with many schools, players who try out for the varsity at Bishop’s are there by invitation from the coach. But Mattox makes it known that players who don’t get an invitation can contact him and ask to be part of the tryouts if they think they may be one of the 12 best players in the school. “If they think they belong,” he says, “I have no problem giving them a shot.”

On the first day of tryouts – or, if possible, before tryouts – have each athlete write down the following things on a note card:

4. Set guidelines for younger players who are better than older players

“For our top 7-9 players, it's a true meritocracy. That is, the best players will make the team and play, regardless of year. However, for players 10-14, the rules change. We might have sophomores who are better volleyball players than seniors, but if the sophomore is not good enough to start (or play a lot) on varsity, we will put her on JV and put the senior on varsity. We believe that being a go-to player on JV as a freshman or sophomore is a good role, better than sitting on the bench on varsity. The parent and the kid will probably say that they want to be with the varsity, but how do you train leadership that way? We try to look at the bigger picture beyond their volleyball skills. We think there’s value to (a young athlete) learning to be a clutch player by being the one their teammates look to. There’s natural growth there.”

5. Do some basic athletic testing

It’s up to the individual coach to decide what’s important, but measuring vertical jump (approach jump touch minus standing reach) and quickness/speed (shuttle run) are 2 of the most important tests.

The faster the learner, the better the player you’ll have when it really counts. “Two players might be very similar in August but very different in November,” Mattox says. “It’s important for us to look at how they learn. Who pays attention? We might ask them to set and finish with their elbows extended and their hands flat. It’s uncomfortable for many of them to finish like that. Will they focus on doing it, or will they defer to what they’re most comfortable doing? If we’re looking at two players who are the same and we know that one is going to make varsity and one is going to make JV, we want the faster learner on varsity.”

7. Look for hitters with torque

Whether players are attacking a set or just hitting back and forth to a partner, Mattox wants to see that they can generate torque with their upper bodies. “The normal thing (young players) do is hit the ball with the front of their shirt facing their partner. We want the front of their shirt to be facing sideways, and then we want their hips to rotate so they have torque when they hit. That’s something we stress a lot. It’s a trained skill. (Former Stanford coach) John Dunning talks about this a lot in terms of the health of a kid’s shoulder and back.”

During tryouts in the Bishop’s gym, competition ladders and “doghouse rules” (players staying on if they win, coming off if they lose) are popular. Mattox also favors drills with a low player-to-ball ratio so each participant gets as many touches as possible.

Here are 3 drills he uses at tryouts as well as during the season:

One player is on each side of the net, and 1 “sub” is at a net pole or behind the court. The game goes for 3 minutes. The court is divided in half the long way.

The drill starts when one player “bowls” the ball over the net to the player on the other side. The 2 players then play 2-touch (a forearm pass/dig or overhead dig and an attack). A point is earned for each overhead swing and another point is earned for winning the rally. The player who wins the rally stays on the court and the "sub" comes in to replace the player who loses the point. The new player initiates the ball to start the next point.

Play continues like this until 3 minutes are up. The player with the highest score moves up "the ladder" to the next highest court, and the low scorer of the three moves down.

“This drill tells us who our best all-around volleyball players are,” Mattox says. “You have to be able to defend and control the ball.”

This is a good drill to determine how well outside hitters can deal with a challenging block/defense.

Play begins when the ball gets “bowled” in deep to the 3-player side, which consists of a passer, setter and attacker. Two or 3 players stand in line behind the court on that side, ready to enter as attackers. The passer passes, the setter sets and the attacker hits against the 6-person defense. A point is awarded for a kill and subtracted for an error. A kill is counted if the first defensive touch isn’t caught by another player on the defense. If it is caught, the player gets zero and goes to the back of the line.

When the play ends, the next attacker comes in, but if the previous attacker ended the rally with a kill, she gets to cut to the front of the line (but not in front of the person who was first in line, who is now the attacker).

This drill can be done on either the left or right side. Play first to 5 or for 3 minutes, whichever comes first.

This drill is good to evaluate serving and passing.

Three players compete in a one-on-one game played on half of the long court. One player starts the drill with a serve, and the other passes to a target player standing in the setting position. The players compete to see who can get to 2 points first. If the pass is good – as determined by the target player – the passer gets a point. If the pass isn’t good, the server wins the point. If the server gets an ace, the “mini” game ends with the server as the winner. Then, the target player comes in and gets to choose which role she wants – server or passer.

The “big” game goes for 3 minutes total (or however long the coach wants to run the drill). The overall winner is the player with the most total points. Winners move up the ladder, low scorer moves down.

There’s no substitute for 6 on 6 for evaluating how players “see the game, communicate and follow specific instructions from the coaches.” It’s important, Mattox says, to see how they react to the “whole game.”

"Evaluating the 6 v 6 can be tricky, since the better players often dominate. I often remove the best players, so the players on the 'bubble' get more opportunities."

Mattox suggests at least 2 cuts. Here’s why: “Let’s say you have 35 players trying out for 14 spots. Your 35th player is nowhere near making the team, but your 15th is. I want to cut the first 10 players first so I can focus on evaluating the players who have a real shot. And by having 2 cuts, the better players see that it’s a gradual process and understand that the coach sees that they belong. If they don’t end up making it, they at least know that they weren’t just lumped in with a bunch of players who weren’t even close.”

“A lot of times, it comes down to decisions between 2 players at a position. I don’t want my biases to influence the other coaches, so I’ll have assistant coaches watch the 2 players and then I’ll ask them after practice who they want and why. I never tell them what I’m thinking because I don’t want them to just go along with me.”

When it comes to making cuts or telling players they made JV rather than varsity, Mattox likes to designate a meeting block (20-30 minutes) before the end of practice, then have each player meet with him one on one while the rest of the team plays Queen of the Court – or another fun game. Players are called out in alphabetical order. They bring all of their gear, talk to him, find out if they made it or not, then leave the gym.

“We want to preserve the player’s dignity as much as possible, and we don’t think posting a list is the best way to do it. The meeting I have with each player only lasts about 30 seconds. ‘Hey, congratulations, you’re on the varsity.’ Or: ‘You made the first cut. Good job! It’s going to be super competitive in the next phase. We’ll see you here tomorrow.’ Or: ‘You don’t have quite enough experience. Thanks for coming out. I appreciate your time and effort.’ And if that player is a freshman or sophomore, I’ll encourage her to come back for JV tryouts.”

One thing Mattox will say to players who get cut is: “For every one of you who came to tryouts, there are 5 who were afraid to come out. You guys are the ones who put yourself on the line.’ We want to celebrate that. It’s tough to put yourself on the line like that when there’s a chance that you’re not going to make it, but the ones who did should feel good about it.”