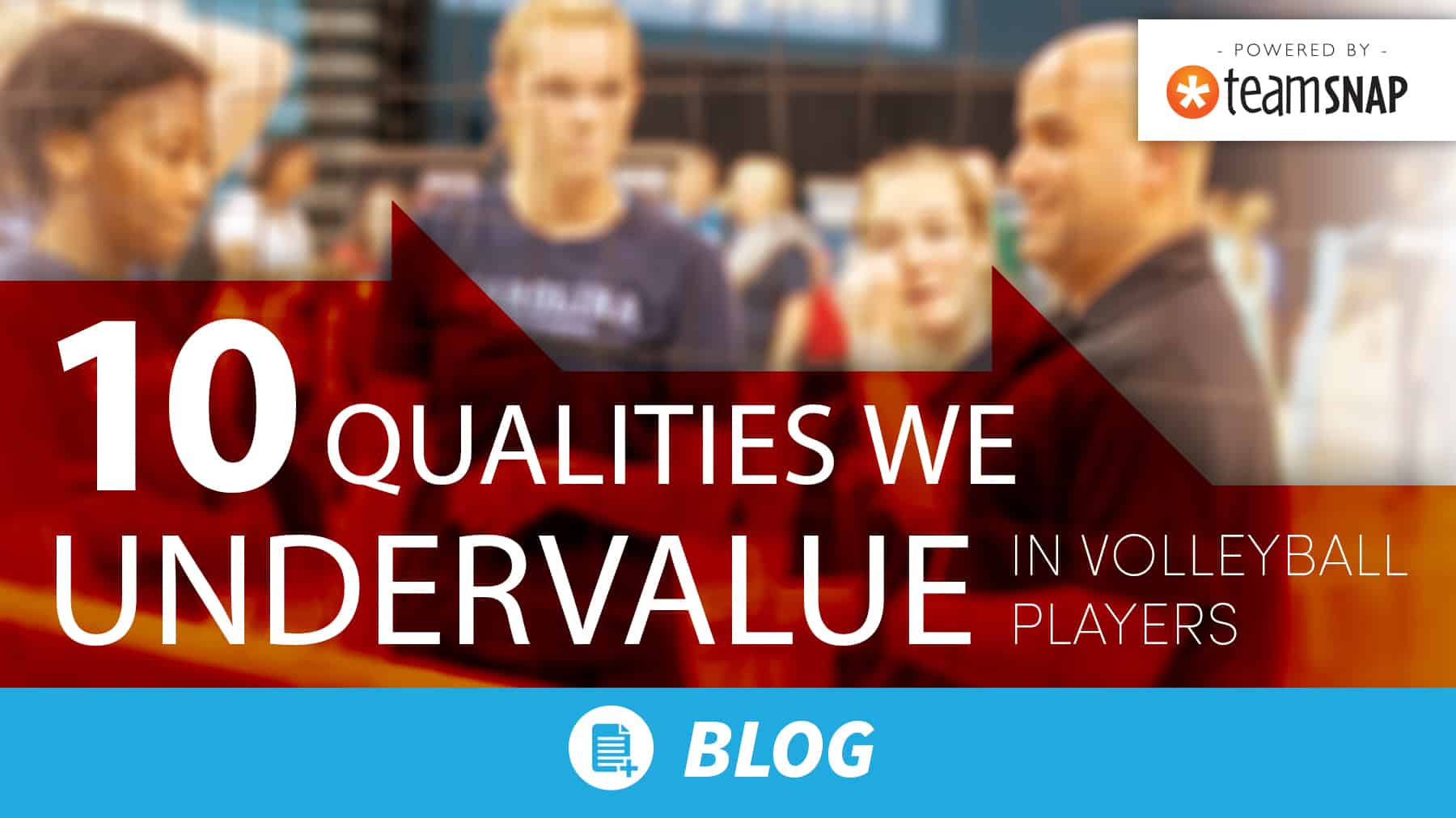 Inspired by the book “Moneyball,” I recently wrote about 10 qualities that are overvalued in volleyball. This week, I’ll talk about 10 undervalued skills.

As I mentioned in the previous article, this isn’t meant to be a comprehensive list. It’s just a discussion starter and a topic that hopefully will get you thinking about what’s important for your team.

1 | Heat
Coaches often talk about hitting high, but hitting hard may be just as important. If players can bring heat as both attackers and servers, they’ll score more points than players who don’t have much pop. Once players have developed solid technique, it’s good to encourage them to push the pace.

2 | Hand contact
At Bishop’s, we work on attackers’ hand contact at every practice. Players who can hit the ball in the middle of their hand every time – not paint-brush it with their fingers or club it with their wrists – are better attackers. Not only are they likely to hit harder, they’ll have more control because the hand contact will allow them to impart consistent topspin on the ball.

3 | “Shaping” the attack
The ability to hit low to high and create a variety of trajectories is also important. If you watch many talented, undersized beach players, you’ll see them getting a lot of kills even though they’re not able to get up high and hit down. They hit deep corners, deep middle and other hard-to-defend spots – all by hitting up through the ball. Shaping is a great technique for indoor, too – for shorter players and taller players as well. If you’re tall and have the same arsenal of effective shots as a shorter player, you’re tough to stop.

4 | Attacking vision
A hitter’s ability to keep the ball in front of her/him and see the block – or lack of a block – is a skill we probably don’t appreciate as much as we should. Many young attackers need to learn to stay calm, wait, and approach slow to fast. Too often, they’re worried about being late, so they approach too soon and end up with the ball over their heads. A simple drill to practice this is to line up an outside hitter against 4 blockers. Allow only 2 blockers to jump and block, and make the combinations random. The attacker has to not only avoid the block but also correctly identify the 2 blockers who jumped.

5 | Defensive vision
Reading an attacker is a complex skill. The best defenders often don’t know exactly where a ball will land, but they adjust their positions after determining where it will not land. A defensive skill we don’t stress enough is ruling out certain attack options to better predict where the ball will be hit. It’s important that players learn to watch a wide range of variables, beginning with the depth of the set. If the set is off the net, the defender has to know that certain hitting options are off the table. This is barely scratching the surface of a complicated topic. I will be writing a blog devoted to this subject in the near future.

6 | Platform sweet spot
At lower levels of the game, kids often get away with not contacting the ball on their sweet spots when passing because the ball is often moving slowly. But passing on the sweet spot becomes increasingly important as the ball and the game speed up. If a ball has a lot of pace, you usually can’t get away with contacting it on one arm, especially when it’s shoulder high. As your passers become more adept at targeting the sweet spot on their platforms, they will become more consistent.

7 | Serving
Practicing serving can be boring and, from a coach’s perspective, it may seem like players aren’t working very hard, given the limited movement. But in high school volleyball and at many levels of club, serving is often more important than terminating. Coaches must prioritize serving and set aside a significant amount of practice time to work on it. Bonus tip: when you’re drawing up rotations, give serious consideration to having your best servers 1, 2, 3. At the younger levels, this may be the top consideration when developing a system, even more important than setter or attacker positioning.

8 | "Flat affect" players
When you look at pro tennis, the best players in the world have all kinds of personalities. Some are emotional, some aren’t. Some have “big” personalities, some don’t. My point: players who come through in the clutch and are liked and trusted by their teammates may have less expressive personalities. Don’t make the mistake of undervaluing them just because they’re not the life of the party.

9 | Brain
Fast learners – and players who understand the process of learning – can be more valuable than super athletic players who don’t learn as quickly. I’ve noticed that some young elite athletes have never had to struggle to learn because it has all come very easy to them. The problem is that once they reach a level where they can’t dominate on physicality alone, they are uncomfortable in the learning process. They may not be as successful as the less gifted player who has been forced to struggle in the learning process to earn playing time. Of course, identifying these fast learners is a challenge, and that’s yet another topic for a future blog.

10 | Versatility
With 18 subs in the high school game and 15 in college, volleyball has never been more specialized. Though specialization may help us a bit in training efficiency, is there a downside? Do 6-rotation attackers who can serve-receive and defend stabilize our systems and allow for better communication and more consistency? Does the large number of subs negatively affect trust and cohesiveness? Maybe there is a middle blocker out there who is an elite serve-receiver but has been given the chance. Coaches may benefit from breaking the norm, developing more 6-rotation athletes and enjoying the positive results.