Now that I have your attention, let me be clear. I am not a Karch detractor. Quite to the contrary; I not only have the utmost respect for him as the GOAT in our sport, but I am equally amazed by his prowess as a coach. In a relatively short period of time, he has distinguished himself as one of the best coaches in the world.

Though he guided the U.S. Women’s National Team to an unprecedented World Championship gold medal in 2014, I am most impressed when I hear his players talk about the special culture he has created and nurtured during his seven years as head coach. 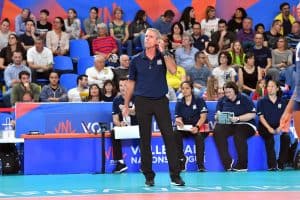 Furthermore, his personal qualities may very well supersede his qualities as a player or coach. As Starlings Director, I have had the pleasure to interact with Karch on a professional level, and he possesses a rare combination of intellect, kindness, integrity and humility. I am proud to say that I know him.

But back to my initial point. When Karch says we shouldn’t teach players to get their midline behind the ball to pass it, I say he is wrong.

Here are my arguments:

As the volleyball player many regard as the greatest in history, Karch has a background that is well known. He started playing with his father, Laszlo, on East Beach in Santa Barbara, and he quickly progressed both on the beach and indoors. As a small boy playing doubles on the old big beach court, he would never be able to get behind every ball. Creating angles outside his bodyline was a critical skill, and it’s one that young Karch quickly mastered. In fact, he learned it so well that when he joined the USA National Team several years later, the 2-person serve-receive swing offense rose to prominence. The bedrock of this system was the ability of Karch and Aldis Berzins to pass the entire court, often creating great platform angles outside of their bodylines. Given Karch’s experiences, it’s not surprising that he minimizes the importance of getting behind the ball to pass.

But as the GOAT, Karch isn’t the norm. While he was winning Olympic indoor gold medals and AVP titles on the beach, I was struggling to get my A rating and coaching JV Girls’ Volleyball at Hoover High School in San Diego. As a novice coach, I had no idea what I was doing. However, I did figure out that if we served in the court and didn’t get aced, we would win a lot more than we would lose. Thus, in coaching beginners, I came to view “ace prevention” as more important than passing to target. Though I’m no scientist, it became apparent that players were much more successful preventing an ace when their core was behind the ball. At the lower levels of girls’ volleyball, I still believe in this basic concept.

In many circles, “progressions” is a dirty word, but I still think it’s useful. Granted, I spend far less time teaching skill progressions than I did in 1984, but I still believe in teaching simple skills before complex skills. It seems obvious to teach a standing float serve before a jump float. 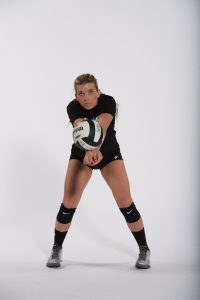 For passing, I would argue that the simplest platform angle to create is when you pass in a straight line with your core directly behind the ball. In a second progression, you are still behind the ball, but you pass it off-line (left back pass to a setter in the middle of the court). In the third progression, you pass completely outside your bodyline and create the proper angle to deflect the ball to target.

So when Karch says you don’t need to get behind the ball, I disagree. I say you should get behind it whenever possible since it’s the simplest angle.

I have observed that most experienced players get behind the ball when they pass an easy free ball. I would guess the reason is that it helps them pass more accurately. Consequently, it makes sense to me to tell young players that they too will be more accurate when their cores are behind the ball. 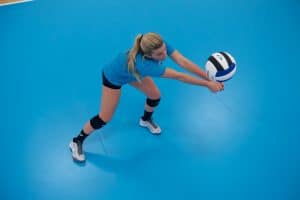 Once again, I’m no scientist. But I have perceived a gender difference when it comes to one’s ability to angle a platform, especially as it moves up to shoulder level. I’m not sure if it’s a strength difference, an anatomical difference, or something else entirely, but in my experience, boys have an easier time than girls creating angles (especially shoulder-high ones) outside of their bodylines.

Given this difference, it’s even more important for girls to pass with their cores behind the ball than it is for boys.

As coach of the U.S. Women’s National Team, Karch is paid to prepare the best players in the country to win medals against the best players from other countries. Given that off-line passing is an under-taught skill, his emphasis on it is understandable. The velocity and accuracy of international serving make it even more critical for his team’s success.

However, I am not coaching elite players at the international level. So when that 10-year-old girl swings her platform over her head in an attempt to pass, I will not remind her to “create a better angle.” I will continue to give the instruction that has worked well for my players for 35 years: “Get your core behind the ball.” This may not be the right thing to tell an Olympian but, in my view, it is the right thing to say to the thousands of young players out there who are striving to become better passers so they can help their middle school, high school or club teams.

Tod Mattox is the head coach of the girls’ varsity volleyball team at The Bishop’s School in La Jolla, California, and the associate director at Starlings Volleyball Clubs, USA.