By Terry Liskevych and Mas Shibata 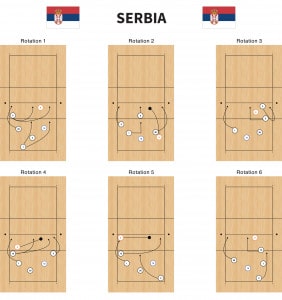 Offense
Rotation 1
Serbia’s primary playset in the pool play match was the (Red/5)(1)(Go/4) combination. They ran this playset 13 out of the 18 times in this rotation. The (Red/5)(3)(Go/4) was used 4 times. Rotation 1 had the most evenly distributed set totals with OH Mihajlovic and MB Rasic each receiving 9 sets and 14 sets going to opposite Boskovic.

Rotation 2
The playset of choice in Rotation 2 was the (Go/4)(1)(Red/5), which was used 7 out of 9 opportunities. Opposite Boskovic received 7 out of the 15 sets in this rotation.

Rotation 4
In Rotation 4, Mihajlovic and Boskovic both received more back-row sets than outside hitters Malesevic (#6) and Nikolic (#12) combined. The playset (Go/4)(Slide)(Pipe) was used in 7 of 9 plays. MB Stevanovic (#15) had 4 slide kills in her 4 attempts in this rotation.

Rotation 5
OH Mihajlovic (#9) rotates back into the front row for Rotation 5 and 6. Playset (Go/4)(Slide)(Dump)(Pipe) was executed in 10 of the 14 serve-receive opportunities.

Rotation 6
Of the 17 total sets in this rotation, 10 went to OH Mihajlovic and 6 went to opposite back-row hitter Boskovic. Outside hitter Malesevic (#6) started in Sets 2 and 3 and was targeted by the USA servers. She passed relatively well in Sets 2 and 3 but struggled considerably in Set 4 with her ball control in serve receive.

USA vs. Serbia outlook
Serbia has sufficient talent to defeat the USA – or any other team, for that matter. Both teams are very good offensively. Serbia combines a good serve with a very good offensive attack. However, USA is more consistent in all aspects of the game. The offense for both teams will be effective. The difference in the match is that the USA is a better blocking and defensive team. USA is also mentally stronger and capable of withstanding Serbian offensive runs. USA will win the long rallies.

Click here to watch the USA vs. Serbia live stream