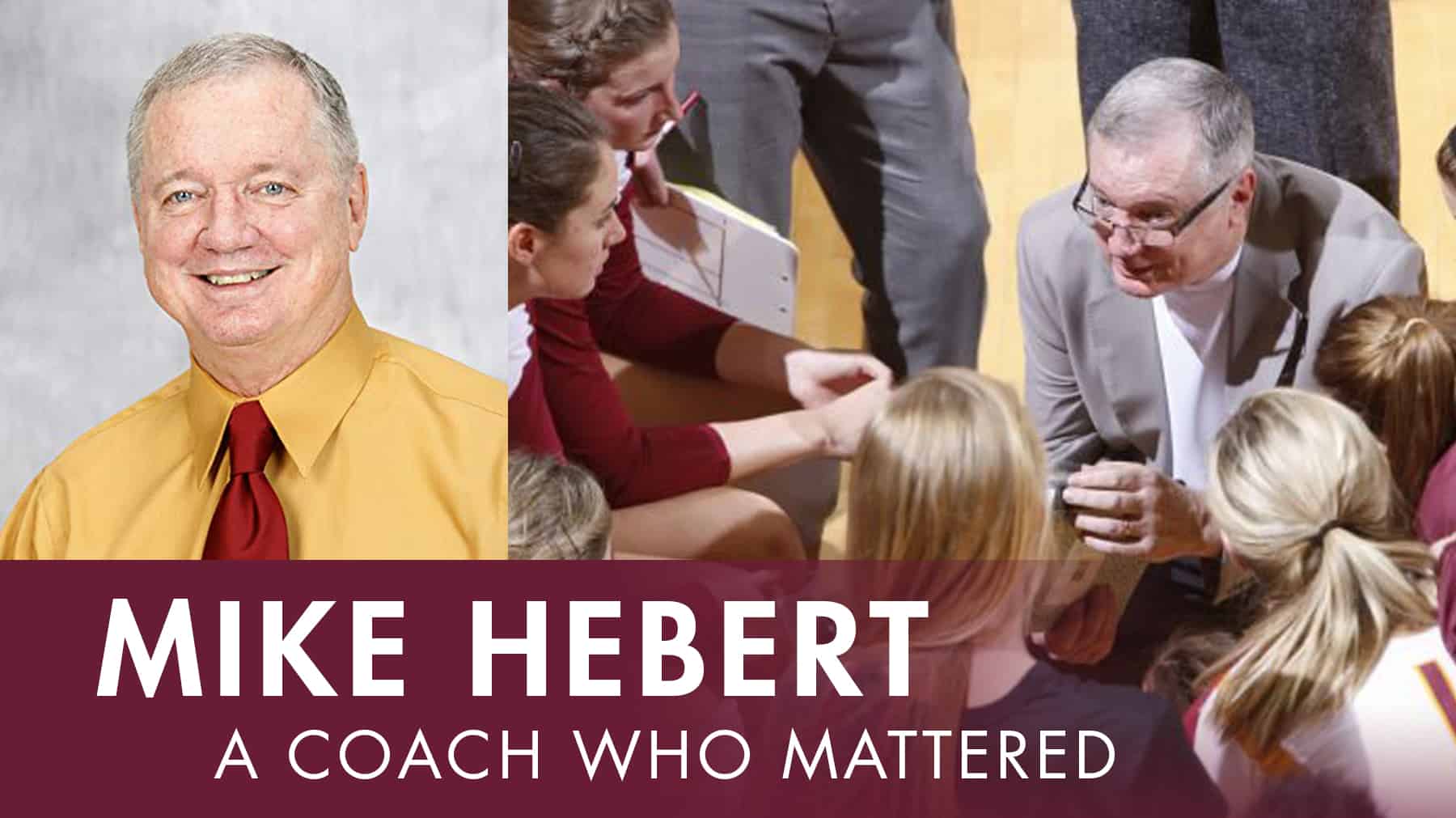 Mike Hebert’s most recent blog for AOCVB, “Green Light Defender,” is still on my computer, nearly complete but not fully ready for publication. Sadly, Mike passed away on Oct. 21 at age 75 before we could flesh out his thoughts on why coaches should allow exceptionally skilled digger/passers to take every ball they can reach. He had been battling Parkinson’s disease for 10 years. 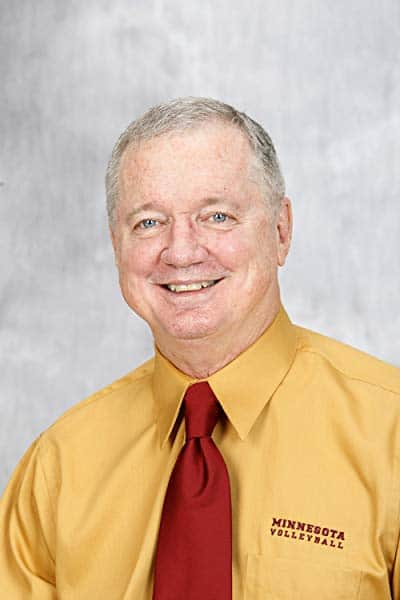 When it came to analyzing volleyball, Mike was a deep thinker, and he continued tinkering with the game in his brain after retiring in 2010 from a coaching career in which he guided two Big Ten teams (Illinois and Minnesota) to the final four and won nearly a thousand NCAA matches. He was knowledgeable and curious, and that made him a valuable blogger for The Art of Coaching. Among the topics he tackled were “listening” to the match to get a feel for how to help your team, why every coach needs a cell phone policy, improving team communication through the Acknowledgement Rule and 4 traits needed for a championship team.

Over the years, many coaches sought Mike’s advice, including Karch Kiraly. The three-time Olympic gold medalist and head coach of the U.S. women’s national team asked Mike to make regular visits to the team’s training gym in Anaheim, California, in the years leading up to the 2016 Rio Olympics. Mike would observe, and Karch, new to the head coach position, would inquire. How am I coaching? How is our staff working? How are the players doing?

“I looked to him as a mentor and someone who could give me feedback on what he saw,” Karch says. “It was great to have him in our gym.”

One memory that sticks with Karch is when Mike addressed the team during a water break and “expressed his admiration for the quality of people we had in the gym – good teammates, good learners, good people. And then he said, ‘I’ve been in this game a long time, and I’ve learned that it’s not plays that win gold medals, it’s people.’ That resonated with everybody.”

A common theme when people talk about Mike is the humor he brought to the job. By all accounts, it was a potluck – a bit quirky, a bit goofy, a lot wry. Karch recalls Mike’s succinct analysis of one particular collegiate season: “We did pretty well considering we had a potato for a setter.” Another time, when describing Minnesota’s loss to a talent-rich Penn State team on its way to an undefeated season, he likened the Nittany Lions to “windshield wipers. They wiped us away like bugs.”

One of the greats who played for Mike was three-time U.S. Olympic setter Lindsey Berg, who was at Minnesota from 1998-2001 before serving as co-captain of the 2008 silver-medal team in Beijing and captain of the 2012 silver-medal team in London. When I asked Lindsey what stood out to her about Mike, the first thing she said was, “He legitimately trusted me to build a program with him, and he had confidence that I could do it and he supported me.” She added, “Sherry (Mike’s wife) was right there by his side, and they always made the team feel like we had a family with them.”

Lindsey describes Mike as a “volleyball nerd” who continually pondered the process. “He was ahead of the game,” she says. “Mental training, nutrition – everybody talks about those things now, but he was talking about them (before they became popular).” 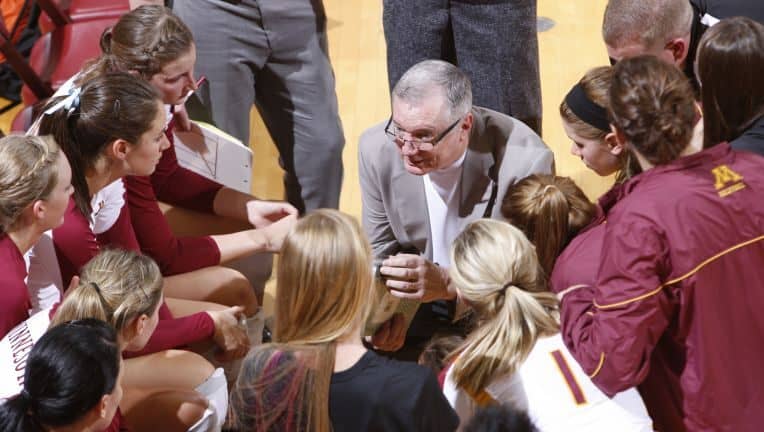 A love of deep-dive volleyball conversations made Mike a trusted sounding board for coaches at the highest level of the game, including former USA Volleyball CEO Doug Beal, head coach of the 1984 men’s Olympic gold medal team.

“Mike and I spoke on the phone quite a bit,” Doug says. “He was always interested in either pushing the envelope in a creative way or challenging your thinking and delving in to your rationale as to why you created a team the way you did. There are probably half a dozen coaches I really enjoy talking to because it’s challenging and stimulating, and Mike was absolutely one of those.”

More important than talking volleyball, Mike talked to his players about life.

“He was a teacher, not only a coach,” Lindsey told me. “He taught us in those important years of life how to be adults and how to work together, and he encouraged us to learn things that were away from volleyball.”

Former Ohio State coach Jim Stone, who competed against Mike for many years in the Big Ten, says Mike always brought a good equilibrium to his program.

As Mike’s health declined, he found it increasingly difficult to use his computer, so he gave me a stack of yellow, line-ruled paper with notes for future blogs written in wobbly cursive. Every few pages, there were gems like this: “One of the most common defensive mistakes made by volleyball players is when they take their eyes off the player and start watching the ball. The ball doesn’t provide adequate information to respond to the attack.”

Similar observations, hundreds of them, can be found in Mike’s 2014 book “Thinking Volleyball,” which urges coaches to avoid defending the status quo and think more about how to “ask the right questions” and search “for possible answers.”

In the introduction of “Thinking Volleyball,” he acknowledges in the final two sentences that the book doesn’t provide “everything you need to know about the game.”

In honor of Mike, let the conversation continue.