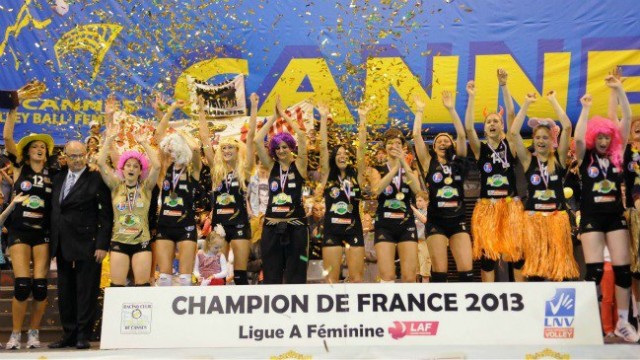 Many American volleyball players have an opportunity to play club ball overseas after their NCAA careers are over, but it’s hard to get a contract unless you know how to get a team’s attention. Here’s your guide.

This is the second article in the Art of Coaching’s series on how U.S. indoor volleyball players can boost their chances to earn foreign club contracts. Our expert on the subject is Andy Inveiss, a San Diego-based attorney and founder of SportsNet International. Inveiss has represented volleyball players and coaches since 1987 and negotiated over 350 international contracts and another hundred or so contracts for U.S. national team players. Our first article on this subject, Spiking for Dollars, covered which positions are most coveted by foreign club teams and which countries offer the best playing opportunities.

The starting point in anyone’s quest to play volleyball for money on a foreign club team is self-evaluation.

In the “Spiking for Dollars” article, we set criteria for four tiers of player categories. Take a look at these and decide where you fit before beginning your search:

When you’ve found the level that fits, go to the Internet and begin your research. Most foreign club leagues have websites with all their teams listed. Once you get team names, you can search for individual team emails and coaching contacts.

To get started, just type in keywords like “professional volleyball Poland.”

Here are examples of league websites from Poland, Italy and Finland:

As you can see, these sites are written in the home country’s language, but one click of Google translate puts it all in English for you.

Once you’ve found a few teams that look good to you, check to see who else from the U.S. has played in that country and track them down. USA Volleyball releases a list of all players who sign contracts each year. Here is the list from 2012: http://www.teamusa.org/USA-Volleyball/Features/2012/December/13/Updated-International-Transfer-List

Facebook is a good way to connect. Most players are happy to talk about their experiences with another high-level volleyball player.

There’s no better way to get information than to talk to someone who has already been there and can give you the pros and cons. Be sure to ask specific questions. Did you receive all your money? What were the cultural differences? How was the food? How much help did the club give you when you needed help?

The right stuff for your resume 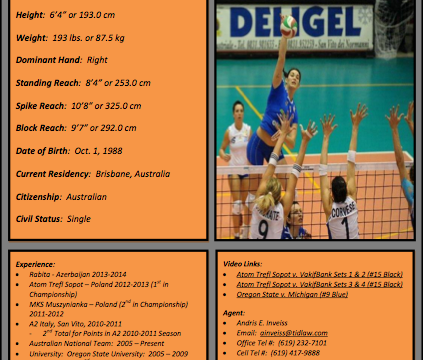 To give you an idea of what a good volleyball resume looks like, Inveiss has shared one from a client of his, Rachel Rourke, an Oregon State graduate who plays for Rabita – Azerbaijan, a top foreign club.  Note that Rourke’s resume is clean and simple, just one page – and just the essential facts.

Obviously, your volleyball accomplishments are what make your resume stand out. There’s no substitute for USA national team experience. If you reach that level, include it prominently on your resume, and mention how many months you were with the USA program and which tournaments or matches you played in.

Other key facts that should be on your resume:

Videos that will get a club’s attention

First and most important: Don’t send a highlight tape. Inveiss says foreign coaches want to see entire matches because highlights don’t tell them much about what kind of player they may be getting. Here are some keys to a good video:

Include a link to your videos in your resume. The easier you can make it for foreign coaches to see how good you are, the better.

References who can help you

Everybody has a favorite coach, but your favorite coach – or even the coach who knows you best – may not be your best reference. References who carry the most weight are coaches who are known in the international community.

College players whose coaches aren’t well known should try to get references from a name coach who they’ve played against. Coaches like Penn State’s Russ Rose or Stanford’s John Dunning or Oregon State’s Terry Liskevych (Terry coached the U.S. women’s national team at three Olympics) are well known in international volleyball circles. A good word from coaches like that can be a big help.