Carl McGown, who passed away in December at age 79, was never shy about giving you his opinion – particularly when it came to what you were doing on the volleyball court. He had earned that right. In his career, he had a longstanding role with the U.S. national team that included positions as head coach, assistant coach and advisor, and he also coached the BYU men’s team to two NCAA championships. 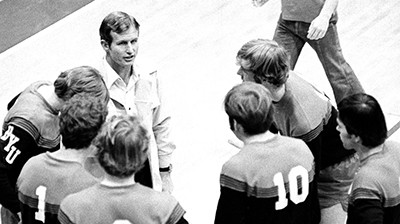 Carl had a very direct style of communication that rubbed some players the wrong way. Honestly, I was one of those players. Early in my career, I wasn’t ready to hear all of his beliefs and blunt advice. If you didn’t subscribe to something that Carl believed, he was going to try very hard to convince you that his way was the right way.

Over time, I came to not only appreciate Carl’s style but to value his advice. He was all about empirical evidence. He would frequently say, “We’re trying to do things in a scientific manner.”

That science, as applied to volleyball, contributed to significant improvements in my passing. I had bounced back and forth during my career between opposite and outside. I would have preferred to be a full-time outside, and I could always handle the hitting duties, but, the fact is, I wasn’t a consistent enough passer to lock myself into the left side of the lineup.

Carl helped me change that.

One day in USA practice in 2003, he stood right next to me as I took my passing reps. He pointed out repeatedly that I was using an inefficient platform motion. I would move my arms together, then down, then back up to the ball. He wanted me to eliminate the downward motion altogether.

I can still hear him. “You just did it again,” he would say, and then I’d do it again and he’d say it again. “You just did it again.” The next practice, it was the same thing. He stood there and let me know every time my arms dipped. Not too long after that, I began seeking him out in the gym and asking him to come watch. I was ready to hear what he had to say.

Eventually, I fixed the problem. And I will tell you that I never passed better than I did in the 2004 Athens Olympics, where I started at outside hitter and we finished fourth as a team. I give Carl a lot of the credit for that.

A slight dip in your platform may seem like a little thing, but it can land you a spot on the bench. Inefficiency of movement is something that many players at every level of the game need to fix if they’re serious about being great passers. And no one understood that better than Carl.

In that respect, Carl is still very much with all of us who he mentored, and he mentored many. His influence on this game will be passed along for generations.

Kevin Barnett represented the U.S. in indoor volleyball at two Olympics (2000 and 2004). He is currently a TV commentator and one of the hosts of “The Net Live,” a broadcast about “all things volleyball.”