Teaching young athletes to embrace their role allows them to focus on what matters most – bettering themselves to better the team.

In the upper levels of youth sports, it’s very clear that there are starters and there are backups. My son learned this hard lesson when he was a backup QB his junior year in high school. 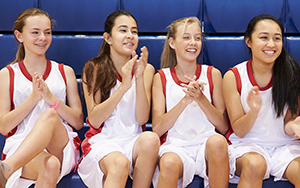 After being a shining starter in freshman and junior varsity football, he was moved up to varsity to stand and watch. He spent a few minutes in the game and a lot of time on the sideline thinking.

I reminded him of how important his role really was. “You never know,” I’d say. “You’re one play from getting in.”

Once in awhile, he did get in. When the first QB suffered a tweaked ankle, a cramp, a hard hit, my son took the field for a few plays until the starter was ready to return.

When young athletes are in a back-up role, whether it’s 2nd, 3rd or 4th string, it’s easy for them to get lazy because they may think they will NEVER get an opportunity to play. Here are 3 things you can say to encourage them:

In 21 years of sports parenting and 28 years of being a coach’s wife, I’ve seen many games where backup players have played crucial roles in the team’s success. When your children are in that position, help them stay focused and be ready to do their part for the team.

Janis B. Meredith, sports mom and coach's wife, writes a sports parenting blog called JBM Thinks. She authored the Sports Parenting Survival Guide Series and has recently launched a podcasting series for sports parents. You can also find her on Facebook and Twitter.