This article is part of a series of critical analyses of volleyball skills. Before reading this article please read the introduction to this series located here: Critical Analysis of Volleyball Skills Series Intro

Once you have determined what your balanced starting posture is for your players through a personal critical analysis, what would be your primary technical components to focus on when passing or digging the ball to the setter? Is it critical to have the hands positioned in a specific way? Should there be a swinging motion with the arms? Should there be specific positioning of the feet during contact? Where should you be facing when the ball contacts your platform? What is the best way to change the direction of the ball towards the setter? What should your posture be when contacting the ball at different locations of the ball in relation to the body and target location?

Many years ago sometime in the late 1990’s, I made a “highlight” and a “lowlight” (aka Reception Errors) video of collegiate passing. It consisted of approximately 10 second clips cumulating into one hour of 3-point passes and one hour of 0-point passes and off the court 1-point passes. After a subjective analysis of these video clips, I would opine that the major common inhibitors to effective ball control were excessive movement by the defender prior to and upon contact with the ball. This movement was caused by either out of balance body posture movements and/or a swinging platform through contact with the ball. As a caveat to this analysis, I recognize that there are situations that would require an out of balance body posture and/or a swinging platform to direct the ball towards the target. A hard driven ball or floating ball just within the range of a defender to touch would qualify for this scenario.

A Critical Analysis of whether it is preferable to pass a ball in a specific location in relation to the body should to be performed to confirm your conclusions if you have a definitive opinion on this subject. Some coaches encourage a midline pass, a left hip pass, or perhaps something different. Your team’s serve receive or defensive system may influence the techniques you choose for your players to utilize.
Given the premise that it would be preferable for a defender to be as balanced as possible upon contact with the ball, it may be necessary to pass the ball on the left side or right side of the body in certain situations based upon the speed of the ball and distance to travel to contact the ball.

I believe the most critical factor in consistent ball control is platform control. Is there an optimum starting position for a player’s arms and hands? Do you prefer the arms to be hanging down in front of the player? Should the arms be extended out and away from the body, or should they be extended up and out to the side of the body? Is there another starting platform position that you would advocate? A comprehensive Critical Analysis would not only answer where the hands and arms would be, but answer the question, “Why”? Another question could be, “Is it even an important factor for you?” 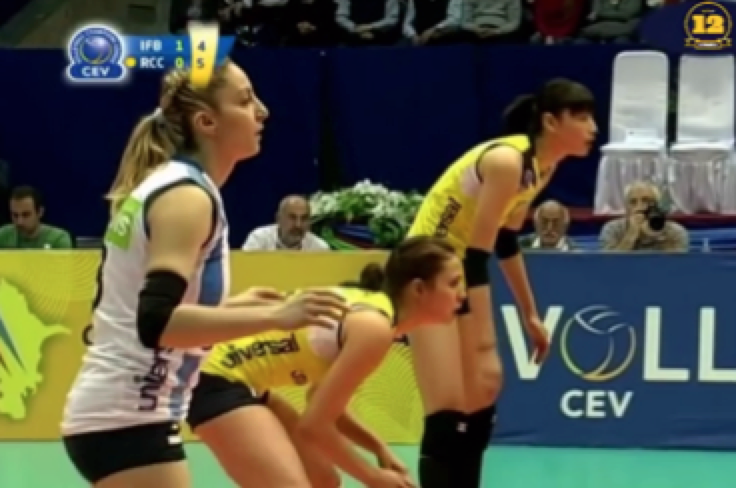 What does a defender do with their platforms versus what we would like them to do? I have often heard coaches tell players to hold their arms out in many different positions and to take their arms directly to the ball. There is definitely a wide array of opinions as to where and how to positon the arms and hands at the defender’s base starting posture. My personal observations are that the vast majority of players will put their arms together and point them straight down between their knees regardless of where the ball is in relation to their body. If you have been training with a player for months, or even a few years, in trying to control their platforms a specific way, and they continue to perform the skill without the ability to change their ingrained habit, is there a point where we take what they do naturally and attempt to enhance it or continue to try and change it? The obvious considerations would be the age and experience level of the player and how long they might be playing at a competitive level in the future.

The video below shows two different angles of an Italian defender in the London 2012 Olympics attempting to dig a 5 set attack. The first clip shows the attempted dig at a speed slightly slower than real time speed and is followed by a slow motion view for further analysis.

The photo sequence from the preceding video shows the two synced views of the play from different angles.

For purposes of this article, I will be making references to “Rebound Angles” and “Tilt Angles”. The Rebound Angle controls the height of the pass or dig and the Tilt Angle controls the direction. Both Angles would be different depending on the direction of the ball in relation to the intended target, the defender’s location on the court, and the location of the ball in relation to the defender’s posture.

The passing photo collage of International Players is presented for your observation and analysis. Do you detect any common characteristics that would cause you to form any conclusions regarding ball control technique? 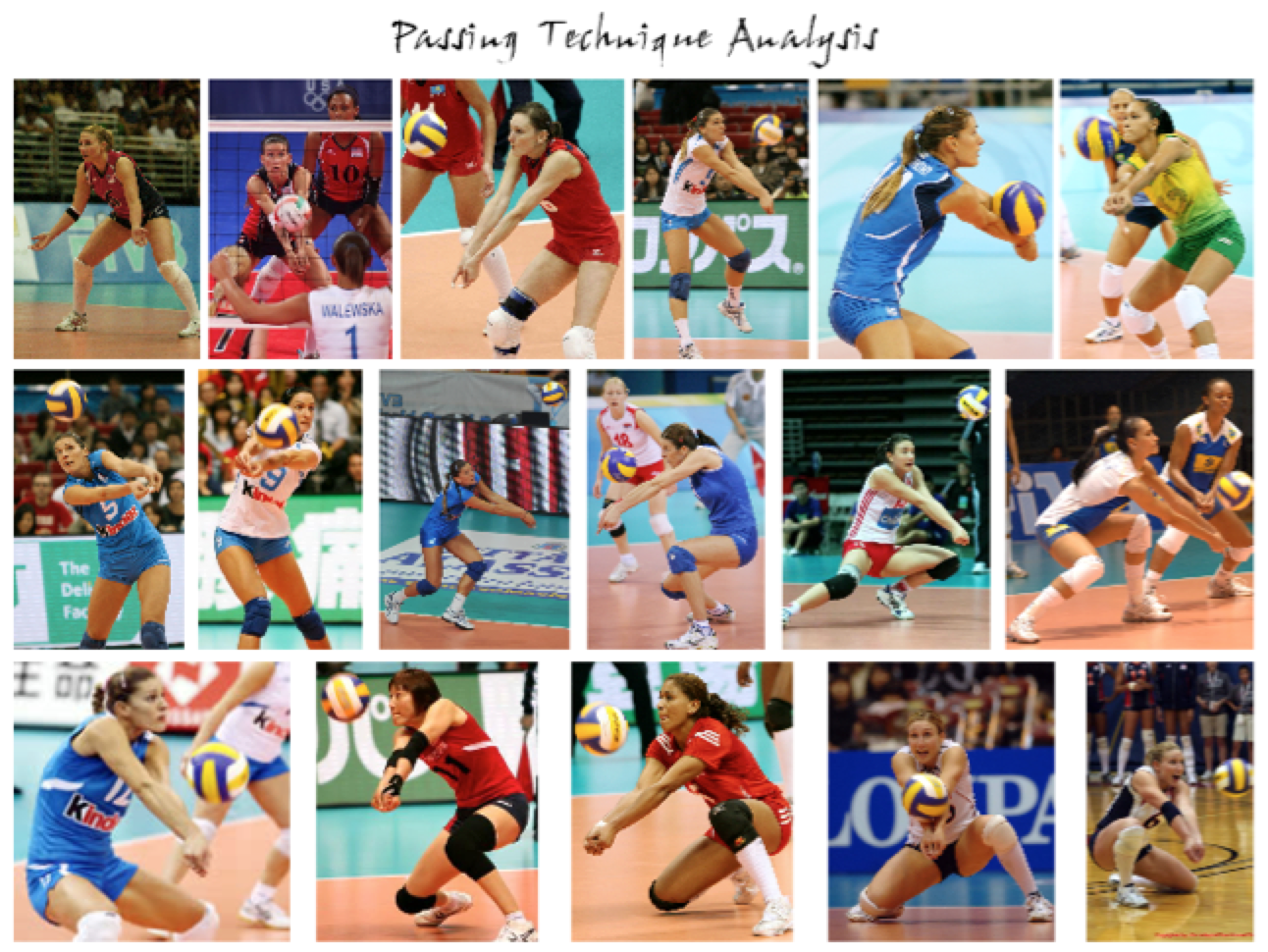 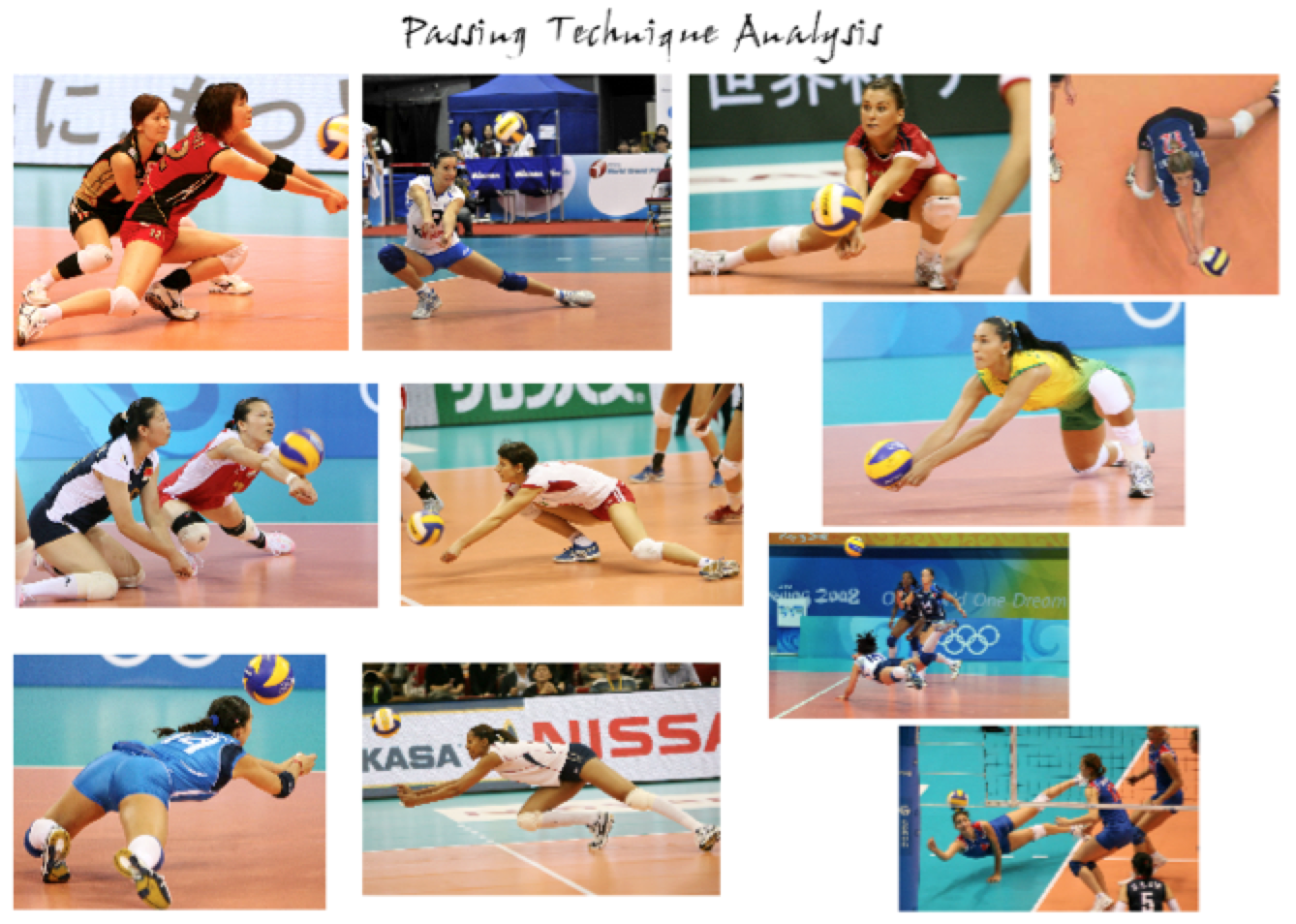 In the most simplistic explanation of how to train passing and defense, I would opine that the most effective and consistent techniques would be to duplicate the postures depicted in the Passing Photo Collage. Do you detect any common physical characteristics amongst the photos or groupings of photos?
Two specific characteristics that piqued my interest are the angles of the back and the point of the elbows away from the body on ball contact in the wide array of ball locations in relation to the body. There is a forward lean of the shoulders in front of the hips in every situation and the elbows are away from the body. For a further analysis of the Passing Photo Collages, I have calculated the forward lean body angles and the angle of the back of the various passers upon platform contact with the ball. 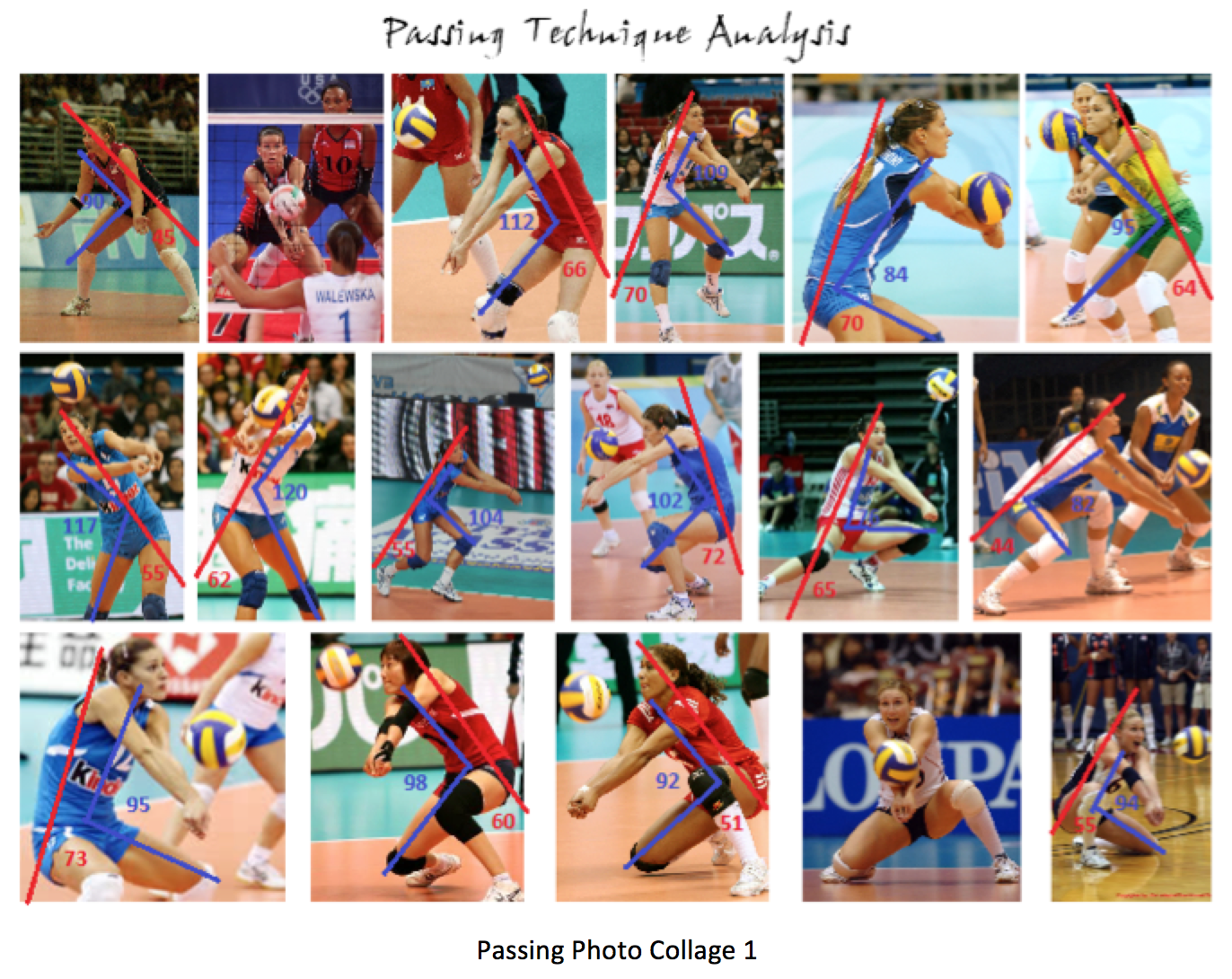 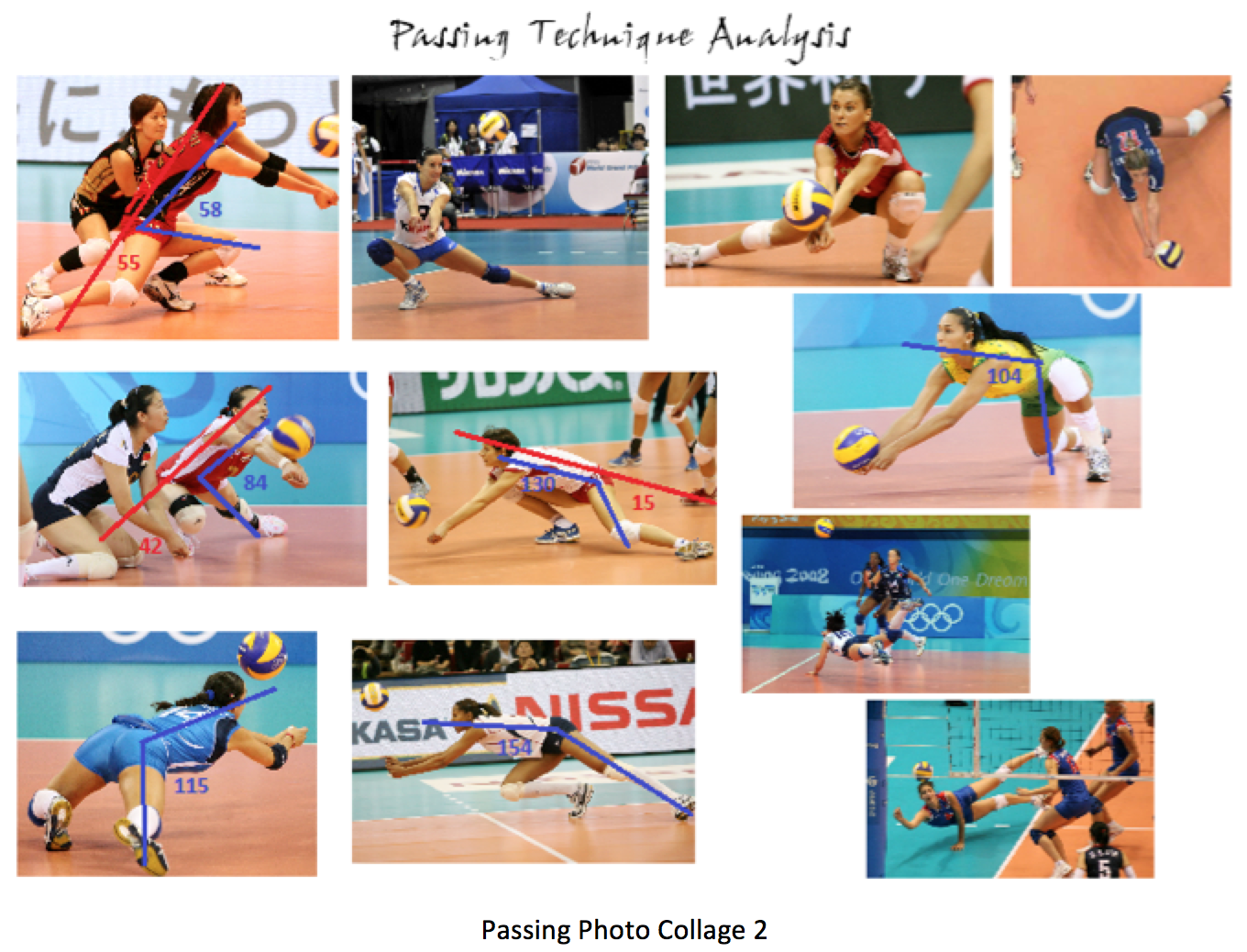 The Blue Line Angles and Numbers show the calculated forward lean of the body in degrees. The Red Lines and Numbers show the angle of the back in relation to the ground. Using the measurements calculated only in the Passing Photo Collage 1, the average Back Angle is 62 degrees and the average Forward Lean is 99 degrees. The starting posture in the first photo on page 1 shows a Back Angle of 45 degrees and a Forward Lean of 90 degrees. The two photos most closely representing the calculated averages in Collage 1 are shown in Row 1, Photo 6 and Row 3, Photo 2.

My subjective analysis in studying the photo collages is illustrated by the following selected sequence of photos.

In the fourteen photos where the back angle of the passer was calculated in Photo Collage 1, only one passer at 44 degrees had a back angle less than the starting posture back angle of 45 degrees. The passing progression shows a collapsing of the knee downward towards the floor. The upper torso and body lean remained relatively consistent from mid to low range height balls in the 90 to 98 degree range.

In my general observation of volleyball players at the youngest junior volleyball level to Olympic level athletes, I believe that the most consistent performers utilize the most simplistic and efficient movements to perform any specific skill and that whenever it is possible, starting in a posture that will most closely resemble the posture needed to complete a skill successfully will produce the most consistent results. I feel a critical common impediment to consistent ball control is that the starting back angle of the defender is consistently below the back angle used to defend the majority of balls passed or dug. The result of this posture creates the necessity to move the back angle upward for an optimal result. In just about every situation, some sort of movement will be required. Eliminating unnecessary movement may be the difference between touching a ball and controlling the ball.

The following video clip shows passers from the 2012 London Olympics. Do you detect any common technical characteristics that would be beneficial for your players to emulate?

Extending the Range of Passers and Defenders

The Back Angle begins to drop below the 45 degree starting posture in balls being played forward and lower to the ground as seen in the Passing Photo Collage 2. These balls appear to be most effectively controlled by an initial long extended side or forward lunge movement to get the hips low to the ground. The following Video and Photos show Italian Setter Eleonora Lo Bianco using a forward lunge and extension to dig a tipped ball.

From the Digger’s first step towards the ball to contact took 0.68 seconds and covered 10.97 feet of court.

The photo below shows the extended range of the lunge extension sprawl dig. The starting Back Angle of the defender in the first freeze frame was 50 degrees and the Forward Lean was calculated to be 110 degrees when the first step to initiate the dig was made. 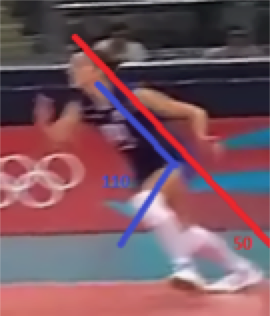 The video clips and photographs presented are just a small collection of the data available for a comprehensive critical analysis of Ball Control elements in Passing and Defense. The focus of this Article was to identify a few components of technique that are sometimes espoused by various coaches I have observed over the years to assist you in determining what will work the best for you in training ball control skills to your players.

Another component affecting ball control would be your team’s Serve Receive System and Team Defensive Systems. Designing and developing systems that complement your player’s strengths and minimizing their perceived weaknesses could be a critical element. Whatever you ultimately decide to implement for your team, enhancing a player’s volleyball IQ in terms of reading, adjusting, and reacting to different situations may be the most valuable tool to develop. Every coach will have their own opinion and ideas as to a sequencing or progression for a passer or defender to process. In my observation and subjective summary analysis of Volleyball Players, there should be an initial read and adjust phase as the ball is received by the setter dependent upon the quality of the pass or dig. There is another read and adjust phase just before an attacker’s contact with the ball which would be influenced by the attacker’s approach in relation to the block formed. After this phase, it may again be necessary for the player to make another adjustment move to play the attack depending on the placement or deflection of the ball. Because of these possible required adjustment movements before playing the ball, I offer the following four passing and defensive clips as a video summary of where my personal philosophy has evolved to with regard to ball control technique. The clips are subject to your own interpretations and conclusions!

As a component of the Critical Analysis of Volleyball Skills Series, we elicit your personal philosophy, experiences and ideas which would be a valuable contribution to coaches in helping to formulate their ultimate coaching philosophies.