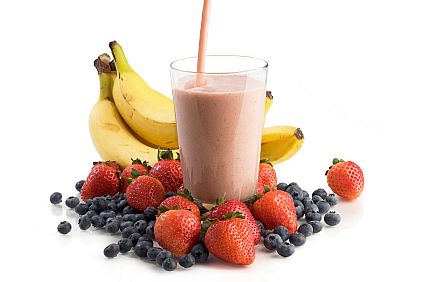 A big part of getting players to perform their best is making sure they’re eating the right things at the right time.

Experts will tell you that eating and drinking is as much a part of playing good volleyball as fitness training and practicing skills. Not surprisingly, the Penn State women’s team, which won the 2013 NCAA championship, pays close attention to nutrition.

With the new season fast approaching, we thought it would be a good idea to pass along some info on how players can improve their play by improving their diet. So we went right to the top and got five tips from Dr. Kristine Clark, who is Penn State’s director of sports nutrition. 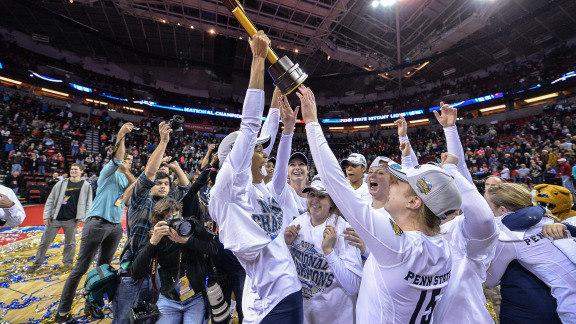 Dr. Clark, who has a Ph.D and is a registered dietician, works with the Penn State women’s volleyball team, and she has this to say about why nutrition is so important for athletes: “Foods from the key five food groups bring in the vitamins and minerals that allow the muscle cells to do the work that we’re demanding of them. If you aren’t eating things like fruits, vegetables, dairy products, meats or meat alternatives or whole grains, you’re missing out on the elements that make the inner-workings of a cell perform optimally.”

1. Eat throughout the day

Athletes need fuel all day. Clark says it’s a good idea for players to eat every two to three hours.

“Every time we eat, we’re bringing nutrients and energy into the bloodstream,” she says. “That influences our ability to think because our brain uses glucose, and it’s also the primary fuel for any muscle group.”

A common problem for student/athletes is going too long between meals or snacks, Clark says. By eating more frequently, you give your body the sustenance it needs to perform well.

2. Eat immediately after waking up in the morning

Each day, you are creating a foundation for building your energy stores back up to where they were the day before, Clark says. So don’t skip breakfast. A lot of teenagers and college students do, but it’s a bad habit, especially for athletes.

Clark says that athletes need to pay close attention to how their day is going to unfold.

“You’ve got to look at your day as if it matters that calories are available to you,” she says. “You have to eat before a workout. You have to. (When you eat before a workout), you’ll get more out of the workout because you’ll have available energy. We want there to be energy in the bloodstream. If you’re working out, you don’t want to go into your bank account and dredge out the energy. You want to have high energy in the first part of your workout, and that means having good sugar or carbohydrates in your blood.”

Clark recommends eating one hour before a workout, and she says that what you eat should be heavy on carbohydrates. Some options: fruit and half of a bagel, a peanut butter and jelly sandwich, yogurt and fruit, dry cereal or trail mix.

Keep in mind, the first half of a student/athlete’s day is usually filled with classes, so eating an hour before practice or a workout means planning ahead. “You need to know where you’re going to be, and you need to carry the snack with you,” Clark says.

“This is something I’ve had to implore my athletes at Penn State to be mindful of,” Clark says. “They know they should drink more, but it’s not on their minds because they’re not stimulated to drink if they’re not thirsty.”

5. Eat a balance of carbs and proteins after your workout

Muscle-cell repair occurs at the fastest rate within the first two hours after a workout, Clark says. She advises her athletes to eat as soon after exercise as possible to facilitate maximum muscle-cell repair.

“We want players to be eating a meal within an hour after exercise,” Clark says. “If that can’t happen, then a snack is appropriate until they can eat a meal. And the snack needs protein. This is where protein is most important for athletes. Fifty percent of what they eat should be protein, and 50 percent of what they eat should be carbohydrate. At Penn State, we give the players protein-carb shakes. But (the snack) could be anything from nuts to trail mix, a sandwich, a protein bar. It could be a glass of chocolate milk – things that are easy to prepare in advance and don’t require refrigeration.”

Clark says that it’s best if players start the recovery process while they’re still in uniform. Ideally, they will be eating just a few minutes after they walk off the court.

“So many athletes don’t understand that their muscle cells have undergone some microscopic damage during an intense practice,” Clark says. “There are hormones, one of which is cortisol, that are elevated with intense exercise. The minute you bring protein into the diet, it suppresses that cortisol production, so it really helps prevent soreness and muscle-cell damage. That’s part of the recovery process.”