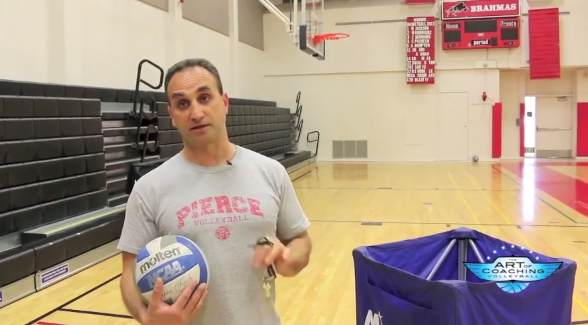 Each team has four players, and everybody is front-row eligible. By taking the 10-foot line out of the equation, points come and go quickly, which increases the number of serving and passing reps. To make the drill go even more quickly, Nabil gives players just 2 seconds to get behind the service line after each point and then 6 seconds to serve.

Everyone on the service team serves three balls total before a teammate takes the serve. Before the third serve, the server must tell the next player that it’s her turn to serve next. This way, the drill never stops and the players are aware of the service order.

The first two 2 points start with a player serving, and the next two start with the coach chipping or throwing the ball over the net. It alternates like that – two serves, two chips – until one team reaches 25.

For setters, this is a chance to work on serve-receive entries in each rotation: 1, 3, 4, where they have to move and go hard to get to their spot, and 2, which gives them a bit of a rest since they’re already in right front.