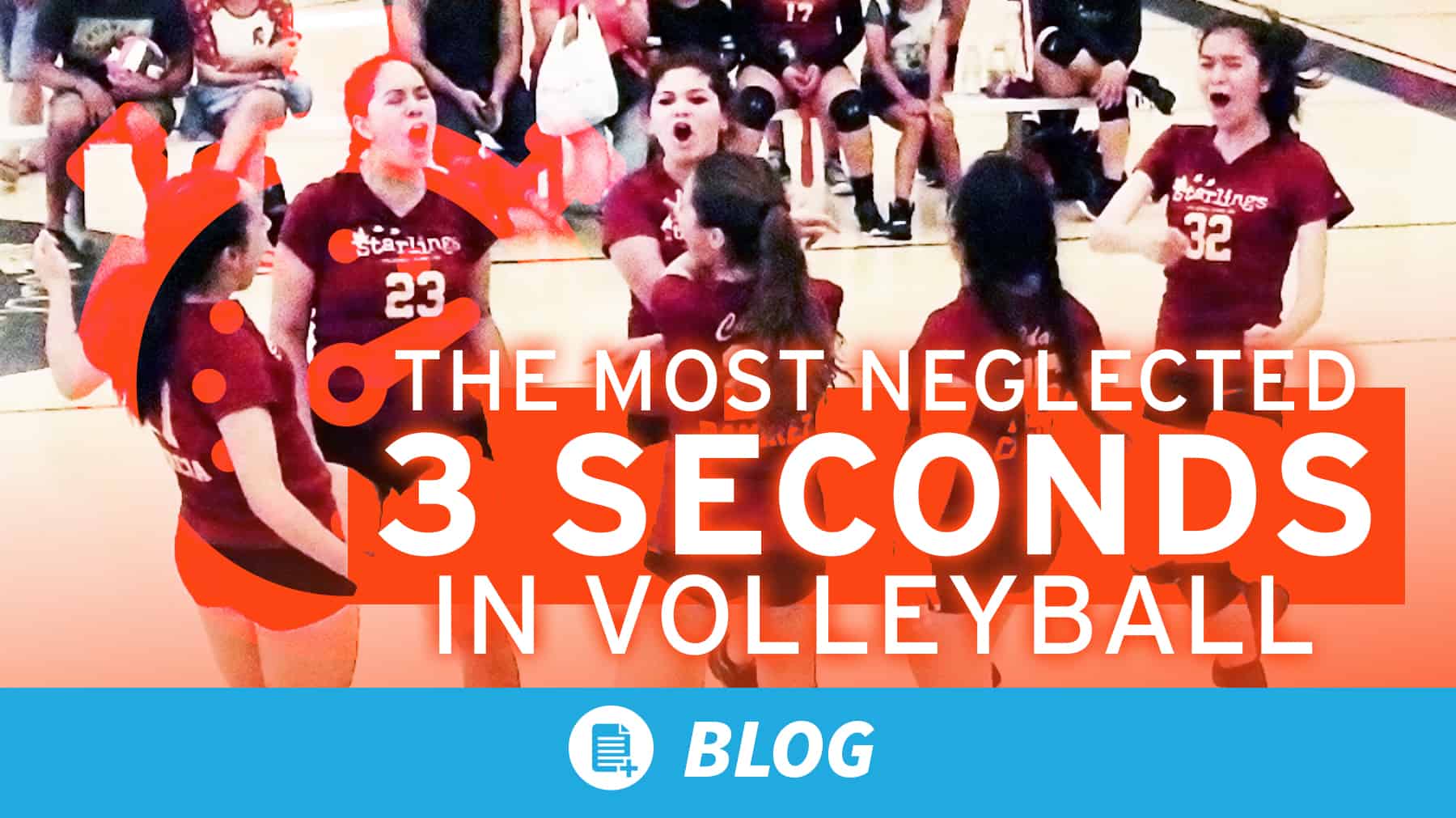 It happens at least 35 times each set, sometimes over 50. It’s an untapped stage for the growth of emerging leaders. It represents dozens of missed opportunities to deliver much needed praise, encouragement and strategy … every … single … set.

What are the most neglected 3 seconds in volleyball?

If overlooked and dismissed, the 6 players on the floor merely come together after each point, pointlessly pat each other on the back and perhaps say, “Come on!” or “Let’s go!” Players who have done well don’t receive specific praise that could reinforce a specific outcome. Players who have made an error don’t receive encouragement to forget the past and make the most of the future, or the reassurance that they are still cared for and accepted by their teammates regardless of the outcome. And teams that are in a slump don’t receive the strategic direction and instructive adaptation that only the court leader can provide without a formal time out.

Volleyball is a game of rapidly changing momentum. Each play provides a new opportunity to start fresh, shake off the past and focus on the next play. Negative momentum, if left unchecked, can spell disaster in a set, despite the coach’s strategically used time outs. And, if a team strings together a series of great plays, momentum builds and the chance of victory grows. The player huddle is THE place to curtail negative momentum and build on positive momentum.

Each team has one or more players who are the true court leaders. The player huddle is the opportunity for the court leader to build on relationships developed off the court and influence the momentum of the game through the players they are leading. The leader should be able to “read” the situation and customize feedback to each individual. Feedback is most effective when given immediately and by someone who is respected. The player huddle naturally provides this environment. The development of these “on-the-battlefield” leadership skills in this setting is important for the court leader’s growth both during the match and outside of it.

Every set, the court leader has 35 to 50 brief leadership opportunities in player huddles. Each of these huddles should accomplish one of 3 leadership objectives:

It’s well known that specific praise is more powerful than general praise for reinforcing actions we want repeated. Phrases like, “Great extension on that block!” or “Awesome form on that right-side cross!” carry much more weight than “Nice job!”

The tendency is to praise the last action before the score (the kill or the block), so don’t forget to acknowledge a great serve that got the other team out of system or a great libero pancake that kept the rally alive.

2 | When an error is made: Encouragement and reassurance.

Nearly every play in volleyball ends in an error. Knowing that there are hundreds of touches in a match and nearly every player will make several errors lays the groundwork for this often-forgotten fact: We are human. Making one or a series of errors during a match is inevitable.

Players who make an error need instant encouragement and need to know that the team has faith in their volleyball ability and contributions to the immediate outcome. Because of the high number of errors in a match, players who make an error must quickly erase it from their consciousness and be fully present in the next play. Phrases such as, “I’ve seen you make incredible digs in practice – I know you can do this” are very effective during the player huddle.

When errors by a specific player occur repeatedly or it becomes clear the player is being emotionally affected, she needs reassurance from the court leader that she is still a valued part of the team and that she has the ability to improve on the very next play. Silence or superficial words in the player huddle after an error can be emotionally traumatic to the player who made the mistake. It can spiral in a negative direction on subsequent plays, sets and matches. When this happens, the court leader can use phrases such as “No worries; I’m so glad to be your teammate; we’ll get this,” in the player huddle (or immediately before or after a timeout).

3 | When the team isn’t doing well: Clarify and/or change strategy.

For a younger/developing court leader, the player huddle can be used to clarify and emphasize what the coach talked about in the last huddle. The leader can notice what things aren’t going as planned and reinforce the path forward with their teammates. Phrases such as, “Remember, we are in ‘strong right’ on defense this rotation” are very effective.

For a more mature court leader, the coach often gives more freedom to call plays and figure out a way to win in a specific game situation. The leader should always be creatively probing the other team for matchup advantages and points of weakness that can be exploited. Phrases from the leader such as, “I’m sorry you are getting a double block. I’ll try a setter attack to freeze the middle for you next time …” can instill faith in the leader and let the team know there’s a potential path to success on the very next play.

Don’t let these opportunities go to waste! Develop your court leaders by challenging them to use every single team huddle as a leadership opportunity to deliver praise, encouragement or strategy to their teammates. The results will be impressive.

Jon Zlabek is the assistant coach of the Girls’ 18s Elite Team through Elevate Volleyball Club based in Sparta, Wisconsin. He is a physician in Vascular Medicine at Gundersen Health System and has taught leadership principles at local, state and international conferences.