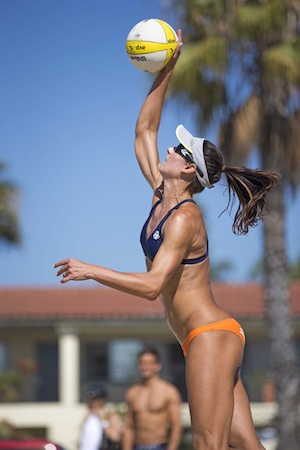 Angie Akers has always been very serious about her training. That didn’t mean she was always in great shape. She was one of those players who gave everything she had in the gym and on the beach but, in her words, wasn’t “smart” about her workouts.

On one level, she was in good shape. She looked strong, toned, athletic, and she played good volleyball: indoor at Notre Dame, then on the pro beach tour.

Beneath the surface, though, important muscles weren’t getting her full attention, even though her daily routine was nothing short of boot camp.

She often trained on the beach eight days in a row without giving herself a rest.

“It was just stupid,” she said recently, a few weeks before beginning her 12th season of pro beach ball. “You couldn’t pull me out of the sand. I gave my body no time to recover. I was so afraid that if I took a day off I would fall behind in one way or another, but that type of training is so detrimental. Over the years, I’ve learned to train smarter, not harder. I’ve definitely backed off.”

Akers’ evolution from too much to just right illustrates how important it is for athletes to streamline their workouts in a way that leaves them functionally fit but not worn out. She got a huge assist from her trainer, Mykel Jenkins, who helped her develop a routine that fit her needs as a volleyball player and made her quicker, healthier, stronger. So let’s start by meeting Angie and Mykel.

Akers, who has 60 top-five finishes in her pro beach career, has cut her daily beach training time from three hours to two, but she says she is accomplishing more in the shorter sessions.

“Now I really focus on concentrated training, so every single rep has a purpose,” she says. “It’s not just, ‘Oh, I have to do this until I’m blue in the face.’ By paying more attention to detail in every single thing you’re doing, it allows you to do less because each rep is more valuable.”

For example, she used to work on each skill over and over until it felt comfortable. Now she limits herself to a certain number of reps, making sure that each one is performed correctly because, in her words, “there are no second chances in a match.”

This helps create a sense of urgency in her play as well.

“You can’t just sit back and work your way into a match,” she says. “You have to be ready to play from point 1 and keep that focus all the way through the end of a match. By creating scenarios like this in training, it carries over into matches.”

Glutes should not be ignored

One thing Akers discovered as she got further along in her career is that her extensive workouts had missed key muscle groups. Her glutes, for instance, were an afterthought.

“They were completely shut off and not working, so they weren’t supporting my body in any way,” she says. “Having really strong quads can make it look like you have really strong glutes, but my glutes weren’t working. I’ve learned how to use my glutes, work my core and use them while I play, and it helps me with balance.”

One of her go-to glute workouts is glute raises. Here’s how this exercise works:

Here’s what it looks like – Angie demonstrates, Mykel explains:

Another realization Akers came to was that paying attention to small, tiny movements as well as smaller muscles is as important – and maybe more important – than powering up the big muscles.

“By activating and waking up the little muscles, it really helps your body become balanced and prevent injuries,” she says.

Among the smaller muscles she has focused on in recent years are low abdominals (transversus abdominis), rhomboids and middle and lower trapezius muscles.

One exercise she does regularly as part of her in-season training routine is “The Suitcase Crunch.” It works the abdominals (especially the transversus abdominis, if you sink your belly to the floor and keep it there), pectoralis muscles, lats and also the rhomboids because of the dumbbell pullover. It’s ideal for volleyball players because it simulates a jump while you’re on your back but also engages many of your upper-body muscles and teaches you to have mind/body connection so that you engage the right muscles to perform the exercise. You do it like this:

Here’s what it looks like. Once again, Angie demonstrates, Mykel explains:

Akers says a lot of athletes think they’re doing good core workouts when they’re really not. She’s found that she’s more balanced now that she has changed her core workout to incorporate low-ab activation exercises, including “The Suitcase Crunch.”

“If you aren’t using your lower body in your ab routine, it’s more difficult to engage your low ab,” she says. “Even performing small movements like gas pedals (you do these by lying on your back with your legs straight up in the air; Your feet are in flexion and you slowly drop about 4 inches controlled by the low ab; Then, you bring them back up with a toe press simulating a push on the gas pedal) will teach you the mind/body connection needed to work your low ab and get the most out of your core exercises. If you feel it in your hip flexors, you aren’t doing it right. You need to sink your belly to the floor and control the movement with your low ab.” 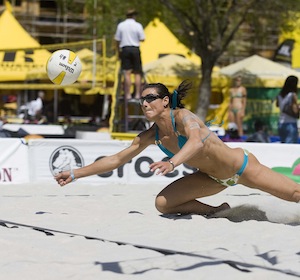 The concluding message, of course, is to be smart. If you’re a coach, help your players realize that their non-volleyball training has to be carefully thought out. Getting strong and in good shape is important for optimum performance, but too much can be worse than not enough. Workouts should be designed not to make players look good in the mirror but, rather, to enhance the specific movements they will be making on the court.

One final note: Akers says it’s crucial that injuries are addressed and treated, not ignored.

“Ignoring issues will lead to much bigger issues down the road,” she says. “Treat your body like you would your favorite car. You wouldn’t trash it, wreck it or put the wrong type of fuel into it, would you? If you want optimal performance out of your body, be good to it in every way. That means proper exercise, rest and recovery, nutrition, and taking care and loving yourself.”