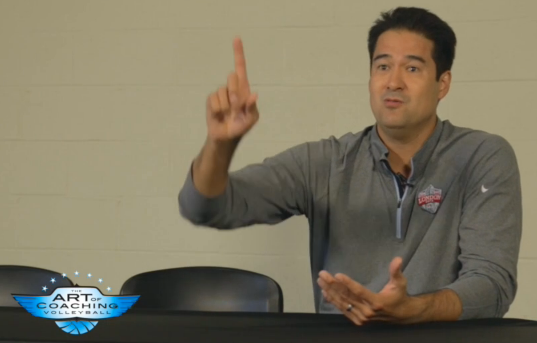 After a long and successful career in volleyball that included two NCAA championships at UCLA, an Olympics appearance in the beach discipline at Sydney in 2000 and 10 tournament titles, Kevin Wong faced a career crossroads in 2010. He was still playing, but he had also been doing some broadcasting work, and NBC told him it was time to choose between the beach and the booth.

At 38, he figured a change would be good, so he picked commentating, and that opened the door to many new opportunities. Among them was a return trip to the Olympics, where he was part of the beach volleyball broadcast team in London.

Art of Coaching caught up with Kevin recently and got his thoughts on everything from his favorite coach to the mentality that has driven Kerri Walsh Jennings to three Olympic gold medals.

Wong had plenty of success on the beach, but in his mind, his finest hour came in the gym.

The Difference Between Girls and Boys Volleyball?

Wong agrees with some of the game’s greatest minds: Girls need to be given enough freedom to figure out things on their own.

For a generation that likes to do things independently, sand volleyball should be a perfect fit, Wong says. Here’s his take on why it may appeal to young athletes more than the indoor game:

In more than 20 years in volleyball, Wong had a lot of really good coaches, from Hawaii to UCLA and on through his beach career. Listen to what he says about who influenced him the most:

Concentrating for long periods of time can be challenging for kids today, says Wong, so his coaching methods account for that. He starts simple, then builds.

His Start in the Game

Height got Kevin Wong noticed in seventh grade, and when he was invited to join the volleyball team, he said yes.

Despite a tough season leading up to the Olympics, Kerri Walsh never doubted that she and Misty May-Treanor would win a third gold medal at the 2012 Games. And she told that to Wong in no uncertain terms on the flight to London.

One thing Wong found out when he was Karch’s beach partner in 2007 was that the winningest player in the history of the game isn’t one to flood his partners with advice.

Teaching the Game to Young Kids

When Wong first began working with young players, things were a little chaotic. Kids would be running everywhere, doing cartwheels, not always paying attention to the coach. Over time, he figured out how to grab their interest.

It’s a big challenge for indoor volleyball to get consistently good TV ratings, but Wong says that the earlier kids start playing, the more of an audience there will be in future generations. He also thinks the beach game is an easier sell. Here’s why:

Making the Game Simpler for Kids

Unlike soccer, volleyball is a difficult game for young children, so Wong believes it has to be simplified.

What Makes a Good Coach?

Two of the keys to becoming a good coach, according to Wong, are self-confidence and the ability to connect with players.