When things get tough, positive reinforcement from mom, dad or a coach can help young athletes maintain their confidence.

One night at dinner when my kids were in college, we were talking about their sports experiences and I asked my son, “Who was the best coach you ever had?”

There was no hesitation in his answer.

I didn’t need to ask why. I knew. I remember the day Coach Hamilton believed in my son. It was his senior year in high school, and he’d earned the starting QB spot. Halfway through the season, he played a game in the pouring rain; it was muddy, the offense was disastrously sluggish and the end result was a disappointing loss. 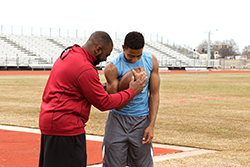 After the game, an unspoken fear clouded our thoughts. Would our son get replaced? We didn’t talk much about it throughout the weekend, but my husband, my son and I all wondered what would happen on Monday at practice.

What happened was this: Before practice, Coach Hamilton called my son into his office. And it wasn’t to fire him. Instead, he told my son that he believed in him and cited three reasons why he wanted him to succeed.

My son walked out of that meeting with his head high. Knowing that his coach believed in him gave him the strength to come back the next week with an outstanding offensive performance. To this day, 7 years later, Coach Hamilton remembers that come-back game as the point when my son showed a ton of courage and strength and proved to everyone that he was one of the best.

And the coach was one of the reasons my son was able to do it. He believed in our son. As parents, of course, we did too, but hearing those words from his coach seemed to empower him even more.

We are grateful to Coach Hamilton for believing in our son. And for reminding us of this very important fact: Belief empowers a kid.

Janis B. Meredith, sports mom and coach’s wife, writes a sports parenting blog called JBM Thinks. She authored the Sports Parenting Survival Guide Series and has recently launched a podcasting series for sports parents. You can also find her on Facebook and Twitter.