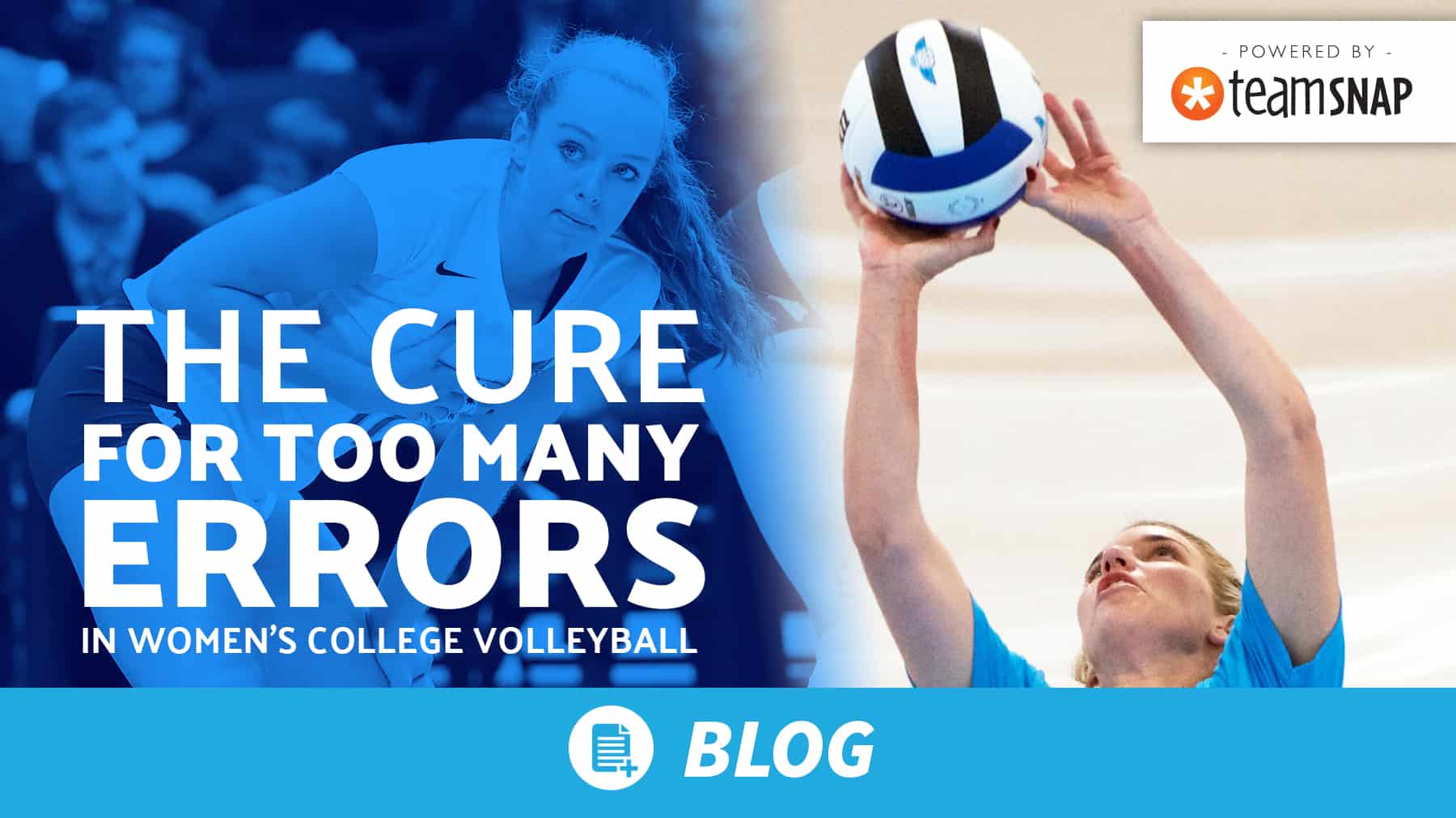 I recently watched a top-10 college team play a match against an unranked but quality opponent. Over the course of 4 sets, the ranked team made 51 errors, which isn’t unusual. The more I watch college volleyball, the more I see error rates that are off the charts.

See for yourself. Pick a match and focus on how points are scored. I think you’ll come up with a big number of errors too.

In my eyes, a good team shouldn’t make more than 6 or 7 errors a set. But in the first half of this collegiate season, it hasn’t been unusual for both teams to make more than 10 in a match. So, even though the set scores might be close, it’s not necessarily an indicator of quality volleyball.

This is not a critique of collegiate coaches or the players. There are good coaches at the collegiate level. I don’t know a single coach that is ambivalent to on-court errors.

This is especially true in the areas of serve-receive and setting. These are the skills that take the longest time to develop.

To put this into perspective, consider this:

At a Youth World Championship competition, my assistant coach at the time, Melissa Wolter of the University of West Florida, went to scout a match of possible upcoming opponents for our USA team. The teams she watched were Brazil and Poland. Both were of high quality. When I saw Melissa after the match, there was a shocked look on her face that was a by-product of the match she had just witnessed. She informed me that Brazil won the match in 3 fairly close sets. Not a huge surprise that Brazil won, however, I was surprised they won 3-0 given the fact that Poland is very competitive. What impacted Melissa is that Brazil made only 3 unforced errors the entire match against a quality opponent. I’ve coached teams that would make more errors than that with an empty court as the opponent.

Fortunately, the Brazil and USA teams were both staying in the same hotel. We were able to converse frequently with the Brazilian coaches. There was a good reason that Brazil was able to play such “low error” volleyball. They put in the time and worked very hard to develop a very good skill set. The team was together 2 years, played a competitive international schedule and success at the World Championship was very important to the program.

The late Carl McGown, former USA men’s national team coach and coach of 2 NCAA championship teams at BYU, always preached that the most important factor in skill development was repetition. What can be done to enable players to get the repetition necessary to achieve a quality and diversified skill set? I don’t believe what coaches do in practice is the problem. I would encourage the examination of the current practice calendar for collegiate teams. The current calendar is not conducive to needed skill development. The calendar also places serious physical demands on the athlete.

I suggest one of the following options be considered:

I believe either of these options would positively impact the quality of play during the collegiate season. A calendar modification would allow players to get the repetitions needed to play the game at the highest possible level. A secondary by-product of increased training time is there will be more good players and more good teams. We all have recruited good athletes that just need training. Unfortunately, the current participation calendar makes a quality training routine problematic.