“Never tell people how to do things. Tell them what to do and they will surprise you with their ingenuity.”
-George Patton, U.S. General

One summer day I was day dreaming about my team.  As the beginning of the season approached, I considered these questions.

This list of questions seemed daunting, but I was motivated to find a way to unearth the answers.  I was convinced that getting answers to even half of these questions would put us ahead of the curve as the season started.  I also had an ace in the hole.  I had convinced legendary coach, Mary Jo Pepper, to come to Minnesota as my one of my assistant coaches!  Between the two of us, I was sure we could figure this out.  We initially discussed how ropes courses and Outward Bound-type activities were commonly used to challenge people.  But we wanted something that involved volleyball activity in a gym.  After a full day of discussion, we designed a single drill and planned to use it in the first practice of the season.  We named it the, “The Challenge Drill.”

The Goal of the Drill

We designed a practice situation where small groups of players would work as a team to complete a fairly simple sequence of volleyball skills without errors.  We thought this process would prove to be difficult but it would also provide numerous opportunities for personal introspection and growth.  Coaches would observe and shape behavior. 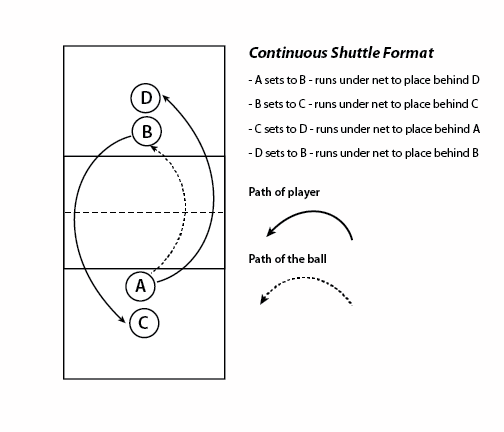 The coaching staff discussed the goals and objectives of the drill and agreed to the following principles:

The Process for Coaches Interactions

Immediately as each group completed the drill, they met with coaches in the gym to process the experiences.  Other groups were still be working to complete the drill.  We gave each player a journal and they were asked to respond in writing to these questions.

The next day the entire team met to talk about their experiences.  They were asked to share their team and individual responses from processing the experience the night before.  They also were asked to share any new insights or perspectives they had gained since the night before.  It was not surprising to learn that the drill was their primary topic of discussion that evening and then again at breakfast.  We learned that the team had not so affectionately renamed the experience, “The Drill from Hell.”

What type of behavior did you personally need to win?

What winning behaviors did your team use in the drill?

How did you respond to problems?

How did you finish the drill?

How did you feel when you finished the drill?

Overall Evaluation of the Experience

As coaches, we believed that the drill allowed us to experience a season full of emotions in one evening.  We learned a lot about each player and what we needed to do to help them individually. Despite their roller coaster of emotions during drill, the team was elated with their success in completing the drill.  They all said they gained valuable information about themselves and the process of working as a team.  As a team (without the coaches) they set these goals for the season.

The team agreed to make these goals a priority in practice and competition.  We often asked the captains to review the goals and the behaviors which allowed them to successfully finish the drill. They also agreed on a mid-season date to evaluate their progress, maybe reset some goals and possibly perform the ‘drill from hell” again.  But that is another whole story…