I know that sounds very wrong, but in my experience, a little external motivation from time to time can be a good thing.

I think this is especially true with young kids. I remember one summer when my middle daughter, Hayden, was 7. She was afraid to join the swim team, but she really wanted a trophy, so my husband and I told her, “If you swim all summer, we’ll get you a trophy.” Now she’s 12 and thinks it’s the silliest thing ever that she was convinced to swim for an hour each morning for an $8 trophy. She can’t believe she fell for it, but she ended up loving swim team, and there’s no denying that dangling the carrot in front of her helped her bust through the fear and find something she really enjoyed.

Just a couple days ago, I was listening to the Coaching DNA Podcast with Kevin Hambly, Stanford’s head women’s volleyball coach, and I learned how he started volleyball. His mom bribed him with a Georgetown Hoyas cap – his favorite basketball team – to give volleyball a try. This “bribe” seems to have paid off OK for him. 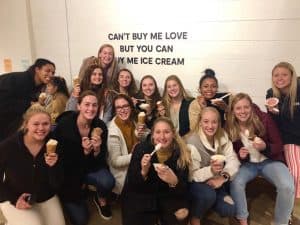 After a winning weekend in 2019, Creighton’s conference championship volleyball team enjoyed the payoff.

With the Creighton volleyball team, we dangle ice cream. For those of you who are nutrition conscious, I should mention that we do eat healthy and teach our players how to fuel their bodies to be at their best. But if we go undefeated on a road weekend, it has become tradition to end our trip with ice cream.

The players love it. Just look at their smiles in the picture. Ice cream equals happy. They’ll talk about it in the huddles during a match. “Hey, we’ve gotta take care of things tonight so we can get ice cream!” It’s great team bonding, and the memories – as well as the images on social media – are irreplaceable.

With all that said, let me make it clear that our team culture at Creighton is not built around extrinsic rewards. Yes, we enjoy our treats, but our program is process-oriented, not outcome-oriented. Our goals are about the path we take, not about the destination. The last thing I want my players or my own kids to think is: “A is success, B is failure.”

As an example of our process-based approach, our team’s lead goal this year was to be the best practice team in Creighton volleyball history. In fact, they set no outcome-based goals; all their goals were process based. They were focused on getting better each day, rather than talking about a big trophy at the end of the season. And they did, in fact, end up holding that conference championship trophy at the end of the season even though they were not picked to be doing so.

My point in talking about the benefits of ice cream is to offer some perspective. Like anything in life, motivation has gray areas. It isn’t all or nothing. You can be a process-oriented coach and still feel good about signing off on some extrinsic rewards – like ice cream.

If you’re still not convinced, here’s another way to think about it. Intrinsic motivation leads to external rewards. During the layoff from volleyball caused by coronavirus, I’m hoping that my players are working their tails off on voluntary strength and conditioning. If they are, the motivation, I would think, is driven by their desire to get more playing time in the fall, which is extrinsic. It’s the same as getting a job at a fast-food restaurant because you want to save money for a car. The car is an extrinsic reward, so what’s pushing you isn’t an intrinsic passion for flipping burgers but, instead, taking responsibility and working toward something that you want.

I’ll leave you with one more family story. My three daughters – Reese (14), Hayden (12) and Berkeley (8) – all play volleyball, but they also play basketball. I can’t count the number of times my husband and I have urged them to practice shooting in the driveway on their own. Despite our continually nudging, it rarely happened. Until a couple of week ago. That’s when their grandfather told them, “I’ll pay you a penny for every shot you take up to a hundred a day.” Their grandmother, not to be outdone, jumped right in, saying, “I’ll double it!” Ever since, they’ve been outside shooting baskets. Every day.

On one hand, it drives me crazy that it took a financial incentive to get them to practice on their own. Like I said earlier, that is not the primary way I want my kids or my college players to be motivated. But taking a step back from philosophical discussions about deep and lasting motivation, there’s an undeniable truth about Grandpa and Grandma’s “Penny to Play” program: It worked!