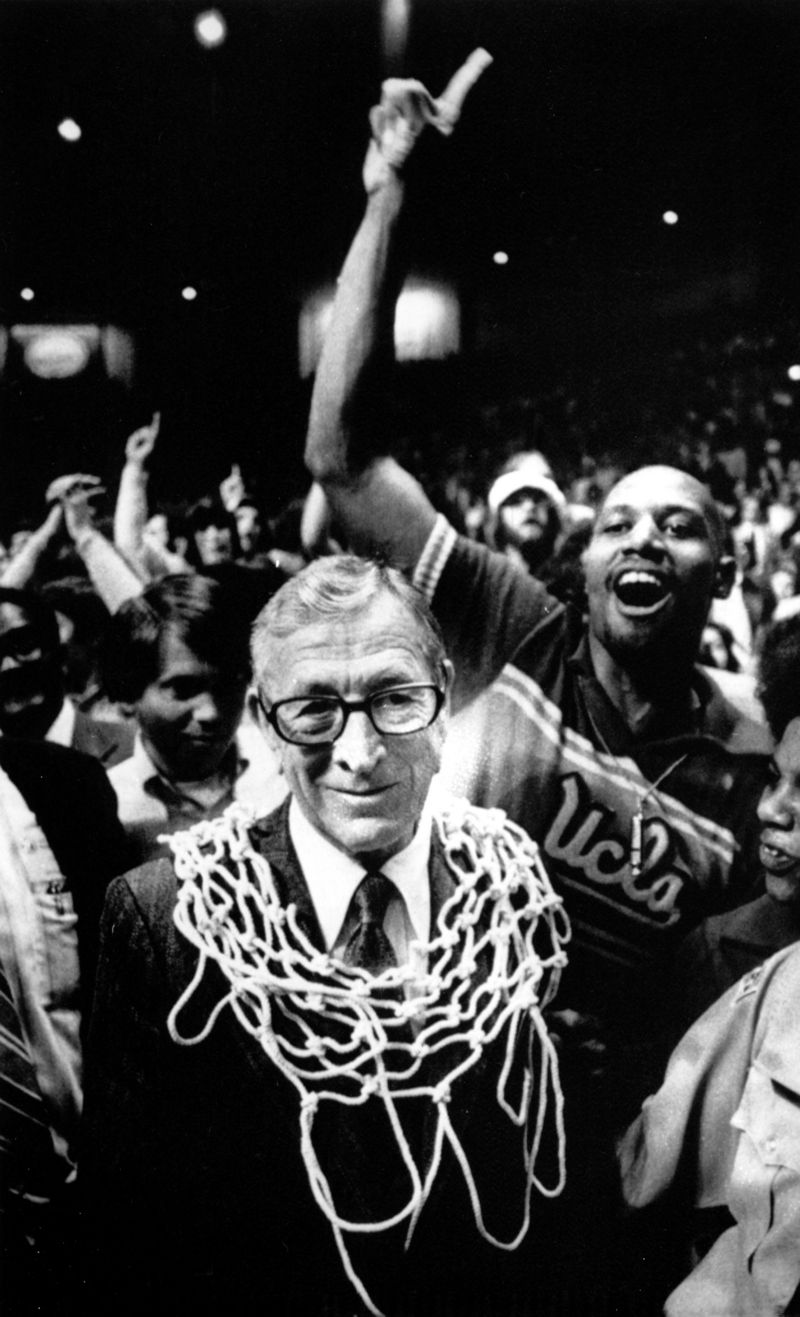 How John Wooden Viewed His Beloved Game on Wednesday, February 14, 2001

COACH:  How has college basketball changed over the past several decades?

WOODEN: First of all, I think the athleticism of the players is just remarkable. I also believe that the blossoming of individual talent has hurt the team game. I don't know for sure, but it is possible that the players are so good individually that the coaches tend to let them go more on their own and, eventually, that hurts team play.

I'm worried that colleges are emulating the pros too much. There is too much showmanship and physicality and to me that takes away from the real beauty of the game. If I want showmanship, I'll go see the Globetrotters.

I would like to see the NCAA move the three-point line back a little bit. I think it's too close. And, though I've always been against it, I'd like to see the basket raised perhaps six inches, just on a trial basis. I'm not sure it would work, but I have a feeling that at this particular time it might help the game. The basket has been at ten feet ever since the inception of the game, and it would be interesting to see what would happen if it were raised a bit.

Overall, basketball remains a beautiful game. I think it's the greatest spectator game in the world because it's played with the largest object and with the spectators closer to the action than they are in football, baseball, or soccer. It's also a game of action and people like that.

COACH: What is your overall impression of coaches today?

However, I believe that the officials are permitting the coaches to be too active in the game. I don't like to see the coaches off the bench and moving up and down the floor all the time.

I liked the rule that made them stay on the bench and forbade them to step beyond it, except during inaction and timeouts. I believe that all the running around is unnecessary. Teaching should be done during practice sessions, during the week, during timeouts, halftime, and so on.

It seems to me that television has made actors out of players, coaches, and, to some extent, officials.

The hyperactivity on the bench bothers me a bit, but maybe I'm completely wrong on that. I don't want to think that something is wrong because I didn't do it that way. But I have always felt that the spectators are there to see the players, not the coaches or the officials.

COACH: Do you think coaches have as much control over their players today as they did when you were coaching?

WOODEN: It's probably the same as it was in my day. The difference is that the coaches have become a little more permissive. I believe that is because the players have become so much better from a physical point of view.

As far as control, there are some things that worry me, I'm old-fashioned, I guess, but when you see all those tattoos and the different things the players are doing to attract attention to themselves, I don't like it.

I also believe that if the coaches insisted on certain regulations, the players would accept it. If you will listen to the players and try to be fair, you will be able to stay in charge.

COACH: How has the incredible amounts of money affected the sport?

WOODEN: In the history of civilization, money has always been difficult to cope with. I've often said that the two most difficult things to cope with are having too little and having too much. I'd rather have too much, of course!

There's no question that the enormous salaries have had an effect right on down the line. It has not only affected the players, but the families of those players, the fans, and the media. The big money is now a favorite topic of conversation.

It does seem that players are getting in more trouble today and having more problems than we had. And I think that in some of those cases, the cause has been too much money.

COACH: Do you think that these problems are trickling down to the high school players?

WOODEN: I think that both the college and high school players tend to emulate the pros. I think our attitudes have changed, and that our youngsters overall are not getting the help from home that they used to get.

Maybe I'm all wrong about that, I don't know. But I've felt that ever since World War II, when so many of our women were involved in the work force, we haven't had the same home environment that we used to have. I'm not against women working, and they made a magnificent contribution to the war effort, but it's difficult to run a household without parents in control of it.

COACH: What do you think of the problems in today's pro game, right on down to the way they play the game and the falling TV ratings?

WOODEN: I think the game has changed to some extent, but not because of the exodus of Michael Jordan, Jabbar, Magic Johnson, and Larry Bird. The NBA has to feature stars, but it's just like the movies, and no one has ever replaced their charisma. But the problems of the NBA go beyond stars and charisma.

The big salaries are based primarily on statistics, and that has made the players become more individualistic -- and that's always to the detriment of the team.

There are a lot of things in the pro game that I don't agree with. All that "traveling," for example. I don't know how many steps they're allowed to take before a dunk.

All that wrestling around the post is another problem. The NBA could clean it up if they just called it. They say it would slow up the game, but the players would adjust to it if they called it. There's no question in my mind about that.

I don't believe we want to see physical strength take over. I think the finesse part of the game is the beautiful part and that the fans, for the most part, like the beauty, too.

Television has produced a lot of the problems. The game has changed, but the athleticism of the individuals has changed, too.

COACH: Do you believe that defense in the NBA isn't all it should be?

WOODEN: The pros save their best defense for the playoffs. The organizations as a whole prefer showmanship on offense.

Why not permit the zone? Especially since both the players and the officials don't really understand what is being considered a zone defense in the NBA. I think it would really help the game. The players are so talented that they'd figure out a way around it, and it would lead to more strategy and more maneuvering. And that would be good for the game.

COACH: How are you doing, John? How are you getting on? You still see a lot of games, don't you? Because we see you on television more than we do our favorite stars!

WOODEN: I go to practically all the home UCLA games, but that's really all I go to. I'm approaching 91 and I'm not getting around too well and what not. But I'm as good as anyone my age has any right to be, and I'm very thankful for that.

I've been very blessed in many ways. I lost my dear Nellie in 1985, but my children and grandchildren all live within 50 miles of me, and what a blessing they have been.