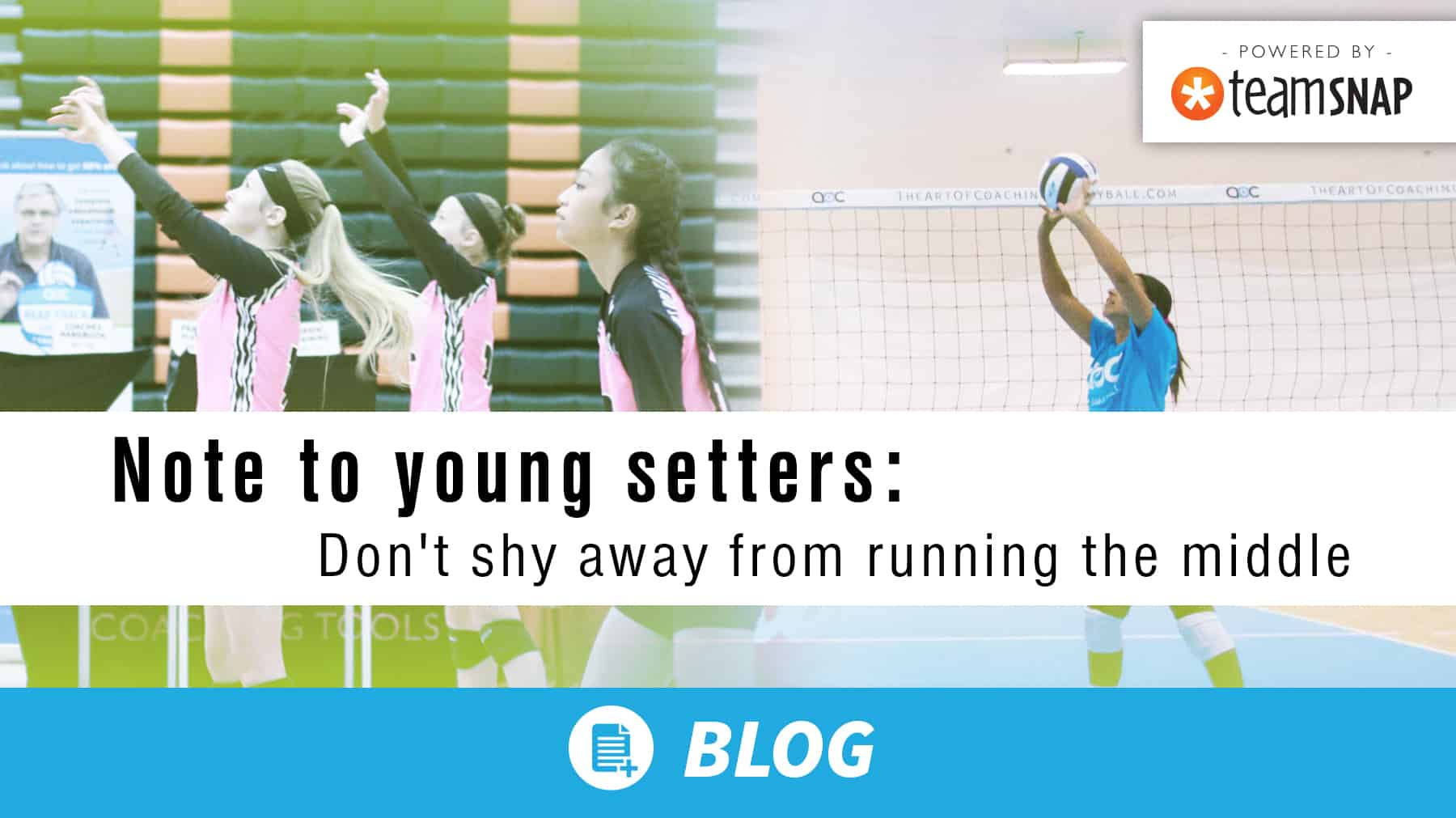 Setting the middle efficiently and effectively is a major asset for teams at all levels. It spreads the attack, takes pressure off the pin hitters and can be very hard to stop, especially at the lower tiers of the game, where defenses don’t see it as much.

But for inexperienced setters, the middle set can be the psychological equivalent of a monster under the bed.

“Young setters are often afraid to set the middle,” says Rachel Morris, a former setter at the University of Oregon who is now the director of coaching development at WAVE Volleyball club in Del Mar, California.

This uneasiness is understandable. A not-so-good middle set is usually a whole lot uglier than a not-so-good high ball. Complete whiffs aren’t uncommon, and whiffs don’t do great things for a setter’s psyche.

“If you miss a set to the outside by 2 feet, a lot of times the hitter can still put the ball away,” says Tod Mattox, head varsity coach at The Bishop’s School in La Jolla, California. “If you miss the middle (by that margin), it’s missed completely – and then all eyes are on the setter. I think that scares a lot of young setters. If they miss, it can make them look bad.”

The “1” is an easier set than the high ball

It’s the coach’s job to help their athletes overcome this fear, and for Morris, who says she runs a lot of “1s” with her 13s team, that involves explaining to young setters that connecting with the middle is really not so daunting.

“My basic idea is, the higher the set, the harder it is to hit,” he says. “I think all the age groups should be running the middle more.”

A loopier and slightly slower set is better for younger setters

For Stone, the sweet spot at the lower levels is not a true bang-bang “1” where the middle is already in the air. It’s a slightly slower set – a 1 ½ or a 2 – that’s easier to locate and doesn’t require a perfect pass. For these sets, the hitter may be jumping as the ball is in the setter’s hands or even just hitting the floor with the plant foot. And that’s exactly the way Morris modifies it for her 13s, although she has recently been working on “1s” with her middles to try to get them in the air before the set. Stone and Morris both say that similar adjustments should be made at this level for the “3.” They want it loopier and a bit slower than you’d see from a D1 college team or the national team.

“When people hear ‘One,’ they’re thinking of something that has to happen really fast,” Stone says. “The speed isn’t what’s important. What’s important is that you’re attacking a different part of the net. And it’s not just (stressing) the block. It also impacts the opponent’s back-row defense. If they’re defending the middle, they start in one court position, and if the ball goes to the outside then it’s a different attack angle that you have to defend. A lot of teams have trouble defending both.”

Mattox has a similar take. “It’s not the speed of the set that beats young teams; it’s the fact that they don’t defend the middle well because they don’t practice it a lot,” he says. “They don’t know how to position themselves to dig the ball out of that area of the court.”

U.S. national team setter Lauren Carlini, a four-time AVCA All American at Wisconsin from 2013-16, says the middle attack “is one of if not the most effective attacks” but doesn’t come together at the lower levels without patience and persistence.

“The only way to get more comfortable with it is to try it in practice and expand the range of both the setter and the middle,” she says. “It won’t be pretty at first, but the more you can pump the ball to the middle with range, the more success you’ll have.” 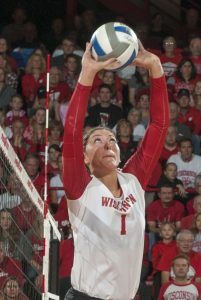 Former Wisconsin All American Lauren Carlini, who now plays for the U.S. national team, says the more young setters can "pump the ball to the middle with range," the more success they'll have. photo courtesy of UW Athletic Communications

Carlini, whose setter training series is available exclusively at www.theartofcoaching.com, adds: “It’s important to train both serve-receive and transition balls. Start with perfect passes, perfect digs, and then start moving the setter off the net. Make sure the middle creates space and stays open to the setter. The setter has to trust that the middle will stay on the route no matter where the pass or dig takes the setter. For example, if the play is supposed to be a “1” on top of the setter but the ball takes the setter off the net, the middle needs to audible to a '3' or 'B' (also called a 'Push' or 'Flare'), which is farther from the setter and creates space on the court. Constant feedback is KEY, and over-communication on this connection is essential to find success.”

Middles need to avoid running to the net

To help the setter-middle connection, Mattox emphasizes to his middles that they have to avoid the urge to sprint to the net. He says they should be jumping from about 5 feet off so they’re hitting from 2 to 3 feet off, not losing power in their spike by running to 2 feet off and then “jumping backwards so they don’t net.”

To further encourage good spacing between the attacker and the net, Mattox tells his setters: “If the pass is on, set it off. If the pass is off, set it straight.”

Stone says that a greater overall level of athlete confidence in setting the middle could be achieved with more buy-in from everybody in the game.

“Teams don’t work on it enough,” he says. “If you go into any gym and there are hitting lines, everybody is hitting out of left front. To develop a comfort level, you have to practice it. There are no shortcuts.”