This article is part of a series of critical analyses of volleyball skills. Before reading this article please read the introduction to this series located here: Critical Analysis of Volleyball Skills Series Intro

The initial Article 1 in the Critical Analysis of Volleyball Skills Series will be on establishing a Passing & Defensive Starting Posture.  A major key component or question for a critical analysis of Starting Posture is to determine whether your Starting Postures would be the same or different for Serve Receive Passing and Individual Defense.  My personal coaching philosophy has evolved to a point that I have elected to teach the same techniques for Passing and Defense.  Therefore, the conclusions for my personal critical analysis would apply to both situations.  You may justifiably and confidently feel that the techniques should be taught differently.

I would venture to guess that just about every player has heard the words, “Get Low on Defense”.  Does this admonition have the same meaning to you and the players you are speaking to?  What would you consider to be too low and how high is too high?  Is it the same for different age groups and skill levels?  Is it the same if you are short or tall?  How wide would you prefer their feet to be?  How wide is too wide and how narrow is too narrow?  Do you have your players stagger their feet?  If you do, should the left foot or right foot be forward?  Does it depend on what side of the court you are on?  Is there an optimal angle for the player’s back to be at for the quickest and most efficient movement?  Is it the same for lateral, forward, and backward movement?  Should the posture remain the same for lateral and forward or backward movement?  Does the level of tension in the body affect quick and efficient movement?  I am sure there are many more and different questions that could be asked and answered for a complete critical analysis on this subject.

When developing and analyzing your Starting Posture theories, what is your primary consideration?  For those coaches that tell your players to “get low on defense”, what is the main purpose you are trying to have them achieve?  Is it for speed, quickness, efficiency, extending the player’s passing or digging range, or some other reason?  Another mantra of some coaches that I have observed over time is for players to maintain a level head position when moving for the ball.  This is another area of critical analysis that I have contemplated in formulating my teaching philosophy.  Is it to dig a low hard driven ball, be able to move as quickly as possible to run down a ball 10 feet off the court, or something in between?  Does the level of your competition influence your analysis?  What are your opponents’ servers and attackers capable of achieving?  Are the majority of balls to be played low and hard or higher with more off speed shots?  Another factor would be your team defensive systems.  Is there a read and adjust phase before an attack that usually results in some required transition movement before a dig opportunity?

The most important analysis tool for me in formulating my coaching and teaching philosophies has been video and photo analysis.  I have attempted to determine the common technical traits of all the volleyball skills through this analysis.  I have come to believe there are untrained natural tendencies adopted by players that subsequently become habits through repetitive muscle memory.   Once they become ingrained habits, there must be a conscious effort to effectively change these habits if it is not done the way you would prefer them to be performed.

I have compiled some comparative videos for your consideration in determining the Starting Postures for your players.  The players in the shuffle racing videos presented for a critical analysis are typical 14 and 15 year old Club Volleyball Players.  The players were placed in the order of shortest to the tallest going from left to right.  They were asked to pair up and face their partner and shuffle race laterally as fast as possible from the net to the ten foot line two times.  The comparative videos below show three starting postures.  The Starting Posture in the top video clip has the players starting with their palms touching the floor.  The middle video clip has the players standing straight up with their feet together.  The bottom video clip has the players starting in a posture of their choice.  Once the race was started, the only rule was that they were to touch the 10’ line and the center line with their foot each time.

The video clip below is presented to critically analyze how players move naturally from these three different starting postures and to calculate what the timing differences may be within the various starting postures.  Hopefully, you will be able to view the video files in this article using a slow motion player or perform a frame by frame critical analysis of the movements.  How long does it take for the players to find their preferred postures in order to move as quickly as possible?  What is the common posture within the three comparative videos?

The Timeline and Data Graph photographs below reveal the timing differences between the three starting posture techniques.  The diamond markers represent the times that the majority of the players’ feet contact the ten foot line and the centerline in sequence.  The fastest time was obtained using the Players Choice Posture.  The Palm Down starting posture was the 2nd fastest, and the slowest recorded time was derived from the Standing starting posture.

The video clip below is presented to critically analyze how players move naturally forward and backward from the three starting postures and to calculate what the timing differences may be within these starting postures.

The Timeline and Data Graph photographs below reveal the timing differences between the three starting posture techniques.  The diamond markers represent the times that the majority of the players’ feet contact the ten foot line and the centerline in sequence.  The times to the first 10’ line was fairly close with the fastest time being obtained using the Palm Down Posture.  The Players Choice starting posture was the 2nd fastest, and the slowest recorded time was derived from the Standing starting posture.  Interestingly, as the shuffle race proceeded, there was a gradual shift in the results as the Players Choice starting posture ended up being the fastest, with the Standing start finishing second and the Palm Down posture finishing last. 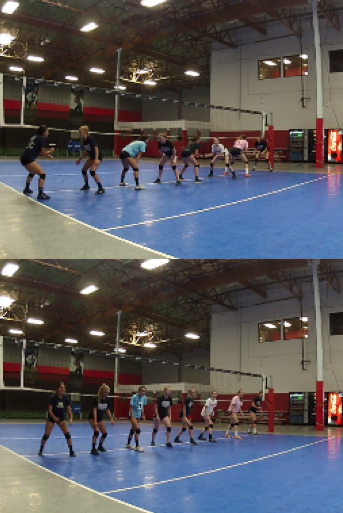 The Timeline and Data Graph photographs reveal that the lateral shuffle is faster than the forward and backward shuffle movement.

Do the video comparisons along with the Timeline and Data Graph conclusions have any impact on your philosophy regarding starting postures for passing and defense?  For an additional critical analysis of data, I am incorporating a Photo Analysis of defensive and passing postures for your consideration.  The photos are a random sample of different starting postures taken at the Southern California Volleyball Association Regionals in the 17’s/18’s Division. 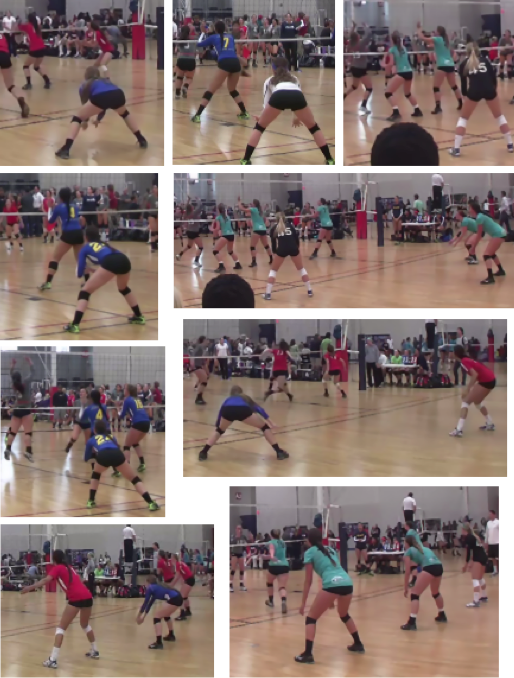 The final two, twelve second video clips below from the SCVA Regionals show the transition movements of two Libero’s using different postures.  They are provided for your observation and critical analysis considerations.

The video clips and photographs presented here is just a very minute sample of the data available for a comprehensive critical analysis of starting defensive and passing postures.  The primary focus of this Article was to identify a variety of different starting postures of players to assist you in ultimately determining what will work the best for you in successfully implementing your technical coaching philosophy.

A common phrase used in the sporting world is “Paralysis by Analysis”.  After completing a critical analysis and deciding what you would like to teach your players, I believe it is very important to keep the instruction as precise and simple as possible while trying to incorporate your identified common skill components.  I feel it would be fruitless to try and answer each question I posed in paragraph two of this Article in detail to a player you are training.

Through my observations of team systems, there is generally some sort of read and adjust movement which is required prior to a Server’s or Attacker’s contact with the ball.  Therefore, I have come to believe a player’s starting posture should allow a player to move as quickly and efficiently as possible before playing the ball.  Once the read movement is made, I try and have the player duplicate the starting posture used before the read movement to be in a position to make another movement to the ball should it be necessary.  My personal conclusion is that the vast majority of the factors that are the most important to me are achieved by duplicating the “Players Choice” Lateral Shuffle Racing Starting Posture as the base starting posture for each player.

Article 2 of the Critical Analysis of Volleyball Skills will be a Critical Analysis of Balance and Platform Control in Passing and Defense.  After a player moves to a position on the court to be able to make a play on a ball in their area of responsibility, what are the common components which enhance ball control?