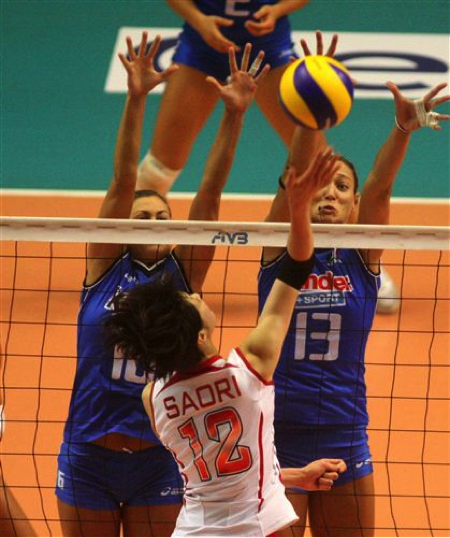 1. The ball always comes down the front of my blockers, why is this happening? 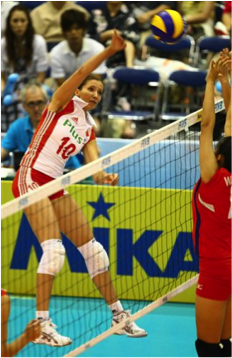 Answer: This is usually the result of the blockers hand and arms going straight up in the air (not crossing over the plane of the net) and the ball hits the forearms of the blocker and comes down the front of them. It can also happen when the blocker is early and they are on their way down and they drag the ball down with them. 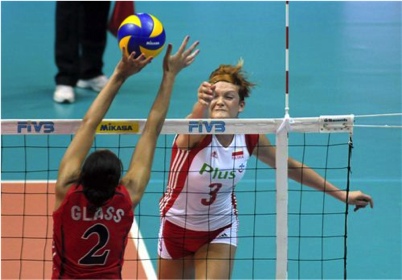 2. The opposition hitters always score off my right front blocker, what is she doing? 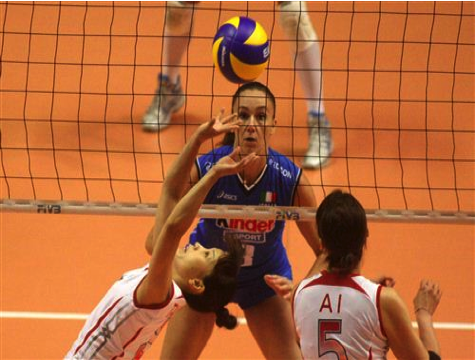 3. What should my blockers be watching?

Answer: The blockers need to be very specific with what they are watching; firstly they need to watch the pass, where is it going, is it coming over the net, what options will the setter most likely have? The next part is probably the most difficult, watch the setter and move after they set the ball (this is where most blockers falter). Once you see the set direction you need to look for the hitter that the ball is set to, that hitter will tell you a lot about what is going to happen next. Is she going to hit line or angle or tip/roll the ball, what is her timing so I can get mine right.

4. I want my blockers to be able to block balls attacked in the middle of the court and also at the pins, what is the best way for them to move?

Answer: Quickly!  They need to cover the maximum distance in the shortest time. In saying that, there are many ways that you can get there, from a shuffle step to a 3 step turn and run. The only footwork that I think can hinder you is crossing over, this I would not recommend as a way to teach blockers to move (especially if this movement is over a longer distance).

The key thing is that you can get all the way to the antenna and arrive before the hitter hits the ball. To do this well you will need to teach your blockers is to be able to “read” the setter, don’t get faked out, make sure you are blocking the player that the ball is set to. The more “guessing” that the blocker does then the more likely they are to arrive late, or not at all. Arriving after the hitter has attacked to the ball can lead to drifting, reaching out, getting “back-doored” and opening up a hard-to-defend seam. If you are late just block an area of the net by putting your arms/hands straight over, no reaching or drifting, just straight over.

5. One of my players went to a camp and came back and told me that one of the coaches told her that she was drifting, I have no idea what she is talking about.

Answer: The camp coach is talking about taking off and landing in 2 different spots. This happens when the blocker fails to arrest their lateral motion. You need your blockers to take off and land in the same spot. The key here is to get them to stop their lateral motion with their inside leg (left leg if moving to the right, right leg if moving to the left). Drifting gives the hitter a moving target in which to score off, it also opens up a seam making it more difficult for the back-court to defend.

Answer: Become a libero! Here is the thing about blocking, you can be a very effective blocker even if you can only get your hands over the net. Most hitters will try to hit down over a shorter blocker and in most of these cases the ball only clears the net by a few inches. If you can get your hands over the net you will touch more balls than you would think, you will also get the odd stuff block as the hitter goes for the glory shot over you. Now if you can’t get over the net at all you could try “soft blocking” (hands facing up and slightly back off the net) or you could design a system where you don’t block but play a tip defense behind the other 2 blockers. 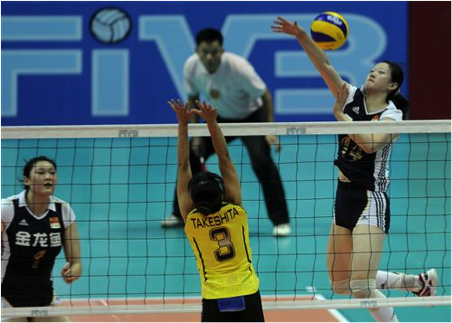 7. How do I get in the right spot to block an attacker that likes to hit angle or line?

8. My backcourt players tell me the seam I create makes it hard for them to dig, what are they talking about?

Answer: The seam is the gap between the two blockers, or three if it is a triple block. Let’s look at a double block, to eliminate this gap you have to have one of your blockers responsible for closing that seam. The outside blocker is the one that needs to take the seam and does this by reaching into the seam with their arms. Seams are also created when blockers reach out to the ball/hitter and widen the gap between themselves and the blocker next to them. Seams themselves are not bad, they often give the backcourt a reference point as to where they should go to dig. Seams that suddenly disappear or widen with poorly disciplined blockers make it very difficult for the backcourt to dig.

9. There are 3 attackers in the front row and 1 in the backrow, who do I need to concern myself with?

Answer: This depends on what your scouting information or game information tells you. There are a lot of situations that could evolve. Generally speaking you need to concern yourself with the hitter that is coming into your zone (area that you are responsible for) and make them the priority. What player do they set the most; do they run behind the setter, what middle attack do they run? All these questions are relevant to the original question because they will give you an indication of your blocking priorities. A more simplistic answer would be to block the balls in order of tempo and read. Block the hitter that attacks first and then the hitter that attacks after, read the setter and block whoever they set.

Answer: No, most blocks take place after the blocker watches the set and then makes a move into the correct position. This is read blocking and it simply means that you watch (read) the setter and the set direction before adjusting. Commit blocking is when you block the hitter no matter what the set direction. E.g you are the left front player and blocking the slide (one-foot attack set to the antenna) attack, you stay on that hitter the whole time they are approaching and if they are jumping you are jumping. You are not concerned with reading the setter you are just concerned in committing to the attacker you are assigned. 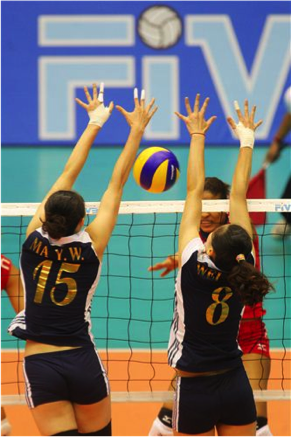 11. What blocking schemes could I use; I like to move my blockers around?

12. Where should I put my best blocker, in the middle or on the outside?

Answer: Put them where they will be the most effective. If they are a better blocker than attacker you could leave them in the middle so that they participate in more blocks than any other player. If they are a very good attacker you could play them either in the middle or in right front (blocking the most common set – left side). Who is the best attacker on the other team, where do they play? You may want to consider this as well.

But remember, as important as blocking is, it is rarely the skill that correlates with winning. Sacrificing your attack to make sure you have your best block each time may not always prove to be the best move.

When teaching blocking you need to look at ways not only to practice it, as the drills below will show but also ways to incorporate it into regular 6 v 6 drills where you may award points for certain blocking actions as a way of making a focus of blocking and practicing it in a real volleyball situation.

1. Blind Blocker. Three people needed. The purpose is to practice watching your hitter. The ball thrower stands on or about the 10ft line on the same side as the blocker. They toss the ball over the net for a hitter to approach and hit, the blocker attempts to block the ball.

2. 5 v 5 - no middle front. Play as a left v left or right v right. RF and LF blockers will be 1 on 1 with their attacker. A great drill to practice taking the angle when you are alone against an attacker. Ball can be entered either by the coach or as a serve. Alternate which team serves.

4. Blocking under the elastic

Much like the serving under the elastic, this drill utilizes a piece of elastic that runs from one antenna to the other. The elastic is set at a height of 1 foot above the net tape. The players jumps and performs a block with the idea being that they have their hands pass between the net and elastic touching neither during the process. The idea is to teach them to have their hands pass straight over the net as opposed to going high and then swinging their arms forward. This drill can be done with or without a ball. The more experienced groups can combine this drill with the coach on a box hitting or live hitting.

This drill is for blockers to get the feel of penetrating the net and blocking the ball before it crosses the plane of the net. The coach stands on one side of the net and will hit a ball almost straight up, the blocker has to time their block and get their hands over the net and block the ball.

6. Variety of Coach on box drills

Considering the variables involved in blocking, these drills are probably the best to do to teach all aspects of blocking. The introduction of a ball and a blocker can take a player that has good blocking form and make them look like they have never blocked before. Start with simple situations involving 1 hitter and progress to 2, 3 and even 4 (backrow) hitters.

Three blockers line up on either side of the net facing each other. A setter comes from the back-row on both sides of the net.