This is Part 3 in a series of articles that will attempt to provide objective data to analyze skill components which comprise the sport of volleyball. The primary focus of Part 3 will be on the speed of an attacked ball and how it could influence individual defensive technique and a team’s defensive philosophy and strategy.

The timed attacks were initially selected because they were kills that appeared to be attacked with velocities in the top percentile of those viewed for this article. Keep in mind that these attack times are among those of some of the best attackers at the 2012 London Olympics. Therefore, I would consider the times to be somewhere near the maximum times available to react to attacks in the women’s game.

Only kills were used to calculate the time available to dig the attacks. The times were calculated from the Attacker’s initial contact with the ball to the time that the ball hit the floor or was deflected by a Digger.

Before viewing the Attack Time Analysis Chart, what would you estimate is the average air time for an attacked ball traveling 23.40 feet? The following video clip number 1 shows Middle Blocker Simona Gioli of Italy attacking a Slide Set. 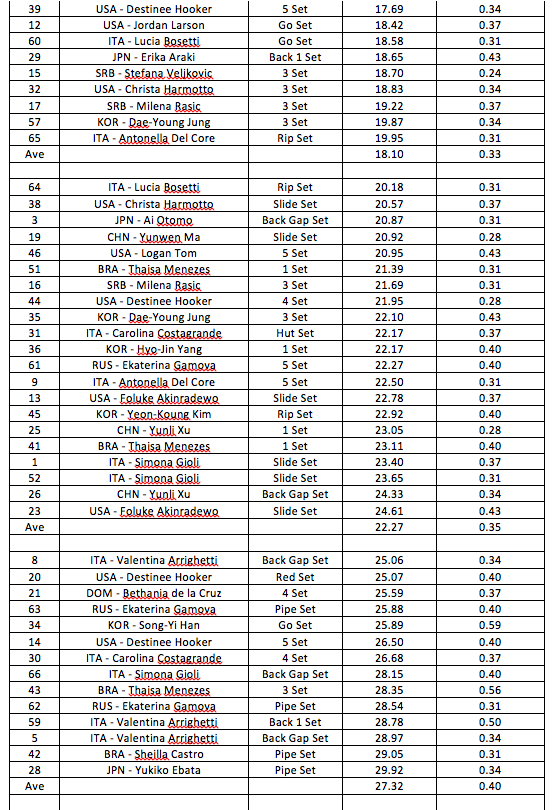 The following two tables are consolidated in rank order by the average Distance of the attack and average Air Times of the ball for your observation and analysis.

The Attack Time Analysis Chart reveals a variety of sets in each time grouping. The average of all the attacks calculated reveals a distance of 23.62 feet with an air time of 0.37 seconds. The averages range from 0.33 seconds for a 13.47 foot attack to 0.44 seconds for a 33.61 foot attack. The Distances and Air Times calculated include the additional length and time created by the trajectory of a higher contact point because of the approach jump of the attackers. The relatively small sample size could have skewed the results to some degree. Assuming that a larger sample size study would reinforce the data presented, there were a few unexpected surprises in my pre-analysis assumptions. For me personally, the single most surprising result of the data was that the average longest front row set at 27.31 feet was the Go Set. Correspondingly, the longest average Air Time including the back row attacks, were the Go Sets at 0.45 seconds. Considering the data developed in Part 1 of this series, the Go Set may create a split block but it also appears to provide the defense more Air Time to defend the attack.

What are the implications of the dig times available and what is physically possible to successfully control the ball? Some of the obvious factors would be positioning on the court with respect to the hitters approach and the location of the block, speed of the attack, reaction time of the defender, and efficient dig technique. Each of these components has a definite cumulative impact on the chances of successfully playing an attacked ball. In my observations of defensive players at all levels of competition, I believe there are two primary negative technical impediments to proficient ball control results. The major factor could be the defender’s balance on the attacker’s contact with the ball. It has been my observation that the vast majority of defensive players use some variation of a Pre-Hop motion. I also opine that everyone that I have personally observed using a Pre-Hop technique is in the air at the time of the attacker’s contact with the ball and the platform points straight down perpendicular to the ground. The clip below is representative of a Pre-Hop motion used by many defenders. It shows Yeon-Koung Kim of Korea defending versus a 5 Set attack by Lucia Bosetti of Italy.

I have provided a photo sequence of the digger from the attacker’s initial contact with the attacked ball through the ball contacting the floor for your observation and analysis.

The sequence above shows the attacker’s contact with the ball in the first frame. The digger is still in the beginning stage of the Pre-Hop as only the left foot is off the ground. The total Air Time of the attacked ball is 0.36 seconds. From the attacker’s initial contact to the digger’s feet hitting the ground and loading in Row 2 - Frame 3 of the sequence to permit a movement toward the ball, 0.30 seconds have elapsed. Because of the ill-timed Pre-Hop, the digger has just 0.06 seconds to react to the ball before it contacts the floor. 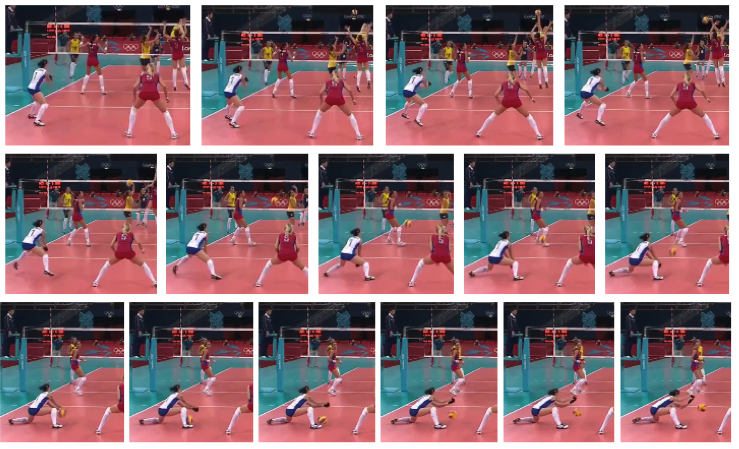 The first frame is the start of the Pre-Hop when the Libero’s heel begins to rise for the Pre-Hop. The total elapsed time for the Pre-Hop movement was 0.24 seconds, calculated up to the digger’s initial move to the ball upon landing in Row 2 - Frame 3. The total Air Time of the attack was 0.31 seconds. Therefore, the time available to react for the dig was 0.07 seconds. The 0.07 seconds is calculated from Row 2 – Frame 4 up to the photo in Row 3 – Frame 2 when the ball hits the digger in the right foot. The two other common occurrences in a typical Pre-Hop are the arms dropping straight down pointing to the ground and both feet hopping outward to a wide position. The digger’s platform begins to swing forward in the Row 2 – Frame 3 photo and gets back to the rebound angle in the Row 3 – Frame 1 photo but was still too late to recover in time to make a play on the ball. The photos also show that the digger’s feet were too wide after the Pre-Hop to get a push off as the left foot slides out and the left knee gets grounded preventing a forward movement toward the attacked ball. Another major impediment to successfully defending an attack is the Negative Step, in which the defender initially steps backward to load the foot for a forward push. The following clip shows a Korean defender taking a negative step in real time to play the attack which was deflected by the blocker.

The negative step by the defender takes a total time of 0.43 seconds. The print screen sequence below shows the defender as she begins to rise up and move her left foot backwards. The timer is at zeroes and the green line shows the location of her feet prior to her initial movement upwards. The sequence continues to the final frame when the right knee begins to move forward for the dig. The timer is now at 0.43 seconds and the starting green line reveals that there has been no significant forward movement up to this point. 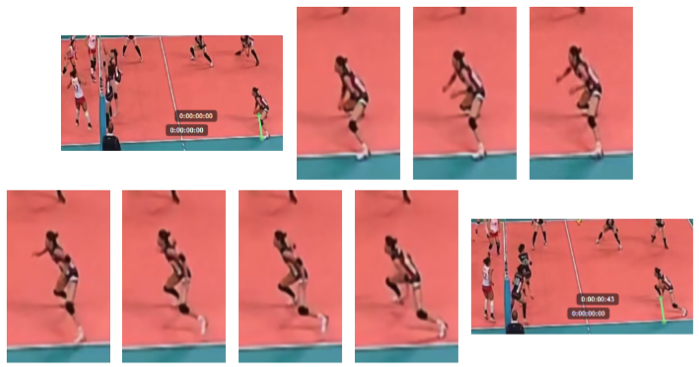 Both the ill-timed Pre-Hop and the Negative Step often takes more time to complete than allowed by the Air Times available to defend an attack. Out of the sixty-two clips analyzed in the Attack Time Analysis Chart, only seven of the attacks had an Air Time greater than the 0.43 seconds it took to recover from the negative step.

What are some other factors in calculating what is possible and reasonable to achieve in successfully defending the attack?

FSN and ESPN Sport Science Features and Data for Analysis

I have viewed and assembled most of the video clips from the “FSN - ESPN Sport Science” features which have been produced by John Brenkus. The Sport Science features have provided me the inspiration and motivation for this series of articles regarding our sport of volleyball. The data presented in the features have combined to impact my personal analysis and conclusions about our sport and how I have elected to teach individual technique and team systems and strategies. What is the realistic digging range of a skilled defender given the attack times in the Attack Time Analysis Chart? I have summarized a few of the “Sport Science” data I felt has some relevance to answering this question and have provided edited video of the actual features for your analysis and context.

It takes the human brain about 100 milliseconds just to process the visual data coming into the eye. The brain takes another 100 milliseconds to activate the proper muscles to produce movement.

(For the record, if you viewed this feature, I definitely do not advise guessing where an attacked ball will go in volleyball!)

Reaction Time (message from brain to move) vs. Reflex Action (“a reflex is initiated by a message that gets fast tracked by the brain to the spinal cord where the messages to move originate”). “Some reflexes are automatic and involuntary, and some like moving a glove upward into position can be learned with practice.” – A hockey puck struck from 25 feet away traveling 81 miles per hour reaches the goalie in 0.22 seconds. It took 0.11 seconds for his brain to locate the flying puck and 0.10 seconds for the goalie to move his hands in position to stop the puck.

Hillary Will was able to react within 0.001 seconds of a green light flashing by anticipating a specific and practiced sequencing of flashing lights leading up to the green light.

My interpretation of this feature is the concept of anticipation and sequencing. It could be the key component in minimizing the reaction times calculated in the Zach Thornton and Olaf Kolzig clips above.

Given the time it takes for the brain to process the situation and command movement, how do we mitigate the short time available to become proficient at controlling balls hit at the diggers and extending the defensive range of the players?

Under normal circumstances, there is a natural progression or flow to the order or sequence of events in a rally. After the Serve, there is the transition to Base Defense. The possible sequence of events for the defense would be an Overpass, Setter Attack, 1st Tempo Sets, 2nd Tempo Sets, and then 3rd Tempo Sets. Within each Tempo Set grouping, you would prioritize the various sets in the order of what occurs first, second, etc. As an example, for 1st Tempo Sets, it could be 1’s, Back 1’s and then 3’s. If the natural sequence changes, the anticipation process or sequencing will resume again at that point. As an example, if there is no 1st Tempo Set, the sequencing jumps to the 2nd Tempo Set Grouping.

Taking advantage of opportunities to bypass Reaction and Reflex times by practiced sequencing may provide the extra tenth of a second necessary to successfully defend an attack.

Additionally, without getting into a discussion about specific digging technique, finding ways to eliminate or minimize being out of balance at the attacker’s contact with the ball and eliminating the negative step would substantially enhance the probability of success given the time limitations calculated.