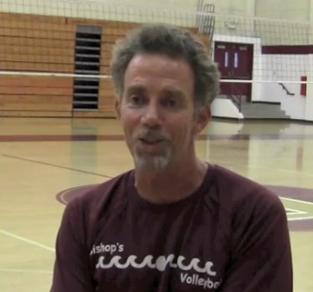 One question coaches frequently ask is how they can best adjust their volleyball practice plans for different points in the season.

Week 1 is very different from Week 10, and successful coaches understand how to build a foundation in the early part of the season that leads to a positive evolution as a team gets into the meat of their schedule.

To give you ideas on what's important to emphasize early on, we turned to Bishop's High School coach Tod Mattox. Aside from being an English teacher at Bishop’s, Coach Mattox has 30 years of experience teaching the game at the high school and college levels and also for Starlings Volleyball Clubs.

To provide you with a thorough understanding of Tod's methodology, we visited his practice on a recent afternoon in La Jolla, California and sponged up a lot of good stuff like volleyball coaching tips, skills, drills, conditioning exercises and other points of emphasis. The following tips are great for brainstorming your volleyball practice plans and can also be used for volleyball open gym ideas.

AN INTRODUCTION TO COACH MATTOX

Our first question for Tod was: Why do you like coaching volleyball? Hear a little bit about the coach in the video below:

Bishop's coaches determined that players often bring their arms together to form a passing platform in front of their bodies at the exact time the server contacts the ball. This means the passer has to swing both arms to the left or right to pass a ball that isn't directly in front of them. It's wasted motion.

To change that, Bishop's coaches regularly pair players off with a partner to practice moving their arms independently. One arm extends to one side or the other, the other arm swings up to meet it. Here's what it looks like:

Mattox, like many accomplished coaches (including Karch Kiraly and John Speraw of the USA national teams), uses video during practice to help players visualize what they need to work on. Videos are reviewed in regular speed and slow-motion to drill-down into the corrections a player needs to make to their form and technique.

The Bishop's varsity team takes a couple of minutes before each water break to fit in strength training exercises. Here, the players work on core strength.

Keep big things big, and little things little. That’s the philosophy that Mattox continues to embrace in his 19+ years at Bishop’s.

In short, if you’re leading an 8th grade volleyball practice, your focus should lie more in the team cohesion of your players and the overall effort and attitude they bring to the gym every day. Mattox’s view is that coaches shouldn't get bogged down worrying about rotations. Attitude and effort, as he explains here, are much more important.

DRILL: KAMIKAZE INSTEAD OF DEEP COURT

Many junior clubs and high school teams play "deep court" in practice, which is usually a four-on-four game with three players in the back row. But Mattox and the Bishop's coaches prefer a four-on-four game they call Kamikaze. This game involves blockers — two players up front, two behind the 10-foot line — and is more true to what the team will face in a match.

Kamikaze gives the attacking team critical game-like practice of tooling and covering, and the defense gets reps in blocking, defending deflections and digging around the block.

Here's what Mattox says about why he prefers Kamikaze to Deep Court:

Kamikaze can be played as either a cross-court game or as a line game. In the cross-court version, players are required to hit cross-court and the line is left open. In the line version, it's just the opposite.

Play starts with a coach or player tossing the ball from across the net into the cross-court corner.

Here's an example of how the line version looks:

At one point during the Kamikaze drill at a recent practice, Mattox stopped play and reminded his hitters that their mission is to challenge the block, not try to hit away from it.

"Quit letting a little blocker make you hit out of bounds," he urged. "Challenge the block! Get blocked, especially when it's off the net."

Asked about this after the drill, Mattox noted that the blocks you face as a high school player or juniors player aren't exactly imposing, so you don't want to make a lot of errors avoiding them.

DRILL: HIT THE TOWEL IN THE MIDDLE

Bishop's runs an offense that calls for relatively low, fast sets to the pins. Since many teams play a perimeter defense and the first release moves by wing defenders are toward the sidelines, Mattox and his coaches feel that the middle of the court is often undefended. With that in mind, they do the towel drill, where hitters try to hit a towel in the deep middle part of the court.

Here's how the drill looks:

This time of year, Bishop's spends about half of its two-hour-and-15-minute practice doing six-on-six games. These always include certain criteria, where points are awarded for achieving goals emphasized in practice - like tooling the blocker out of bounds.

Here's an explanation from Mattox on how points are broken down for one version of their six-on-six games:

The following video shows how this particular six-on-six game looks. Note that on the first point, the hitter earned three points for tooling the block down the line and out of bounds.

Mattox communicates with his players in a very direct manner, and he isn't shy about using a little sarcasm. His view is that players appreciate honest feedback and that it doesn't help them if he's always telling them how great they are.

That said, he's plenty animated about letting them know when they've done something well.

Here's what he says about developing a strong rapport with players:

Should small players who can't yet put their hands over the net still be put in blocking situations? Should the setter be on the right or in the middle? Mattox has analyzed these questions and many more. Here are some of his thoughts on systems of play:

A BISHOP'S EARLY SEASON PRACTICE FROM START TO FINISH

In the first month of the season, Bishop's team practices focus heavily on technique. As the team gets into the competitive season, the focus is more on systems, and practices are shortened. Post-season practices are even shorter, and training is geared toward contending with a specific opponent based on a scouting report.

We asked Mattox to give us an overview of how an early season practice looks from warmups to the time players walk out of the gym. Here's what he said:

Ready to take your training sessions to the next level? Explore The Art of Coaching Volleyball for helpful resources like our volleyball tryout checklist, our glossary of volleyball rules and terms, useful articles like assigning leadership across your volleyball team and much more.