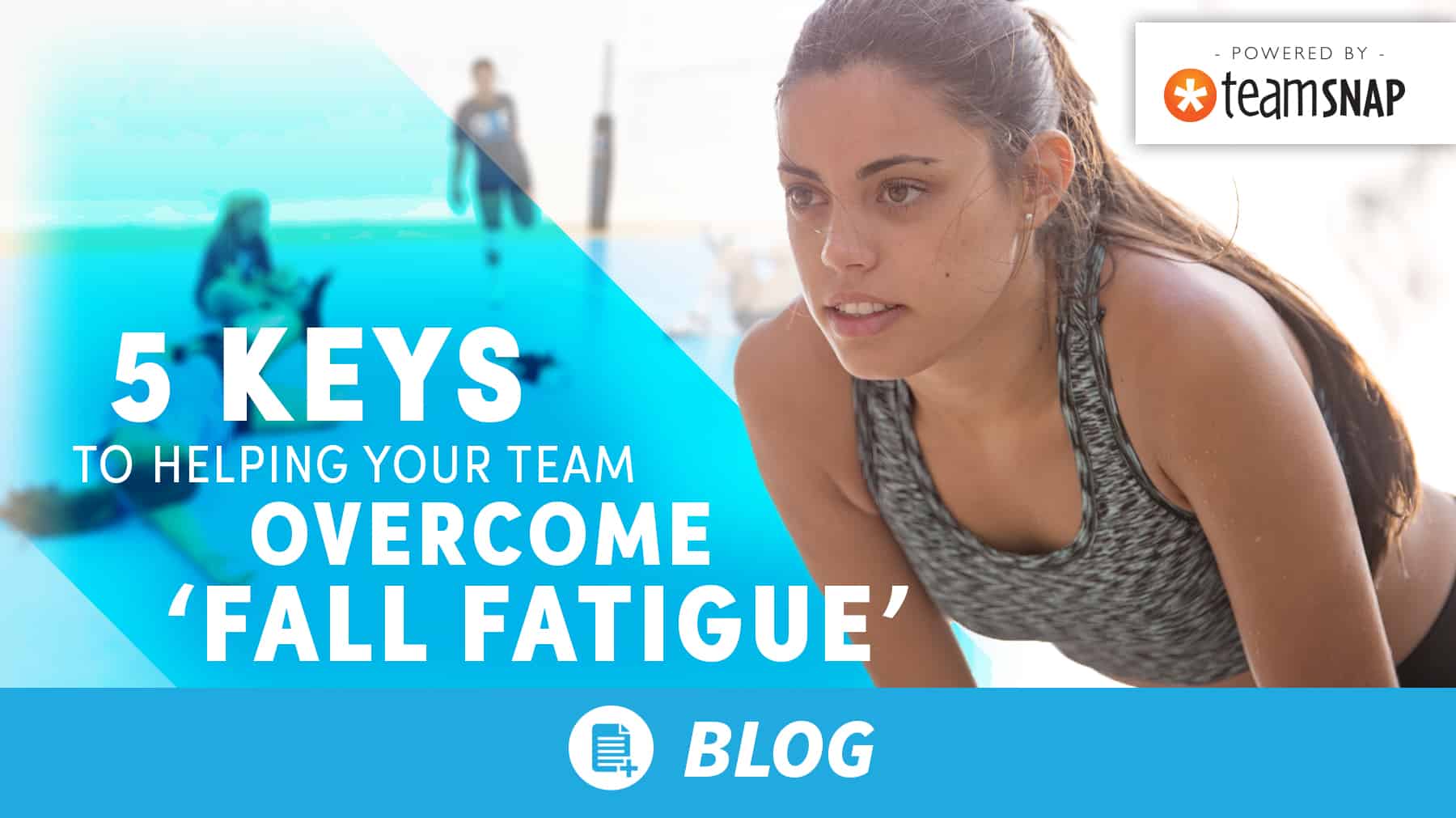 Any regular season coach that’s been around the business a while will recognize this one: Fall Fatigue. This refers to that time in early October, right in the middle of season, when there’s an energy dip that’s almost palpable.

This is usually due to a number of factors:

This point in the season lands in prime time for conference/league matches, which determine the teams that will continue on to the championship tournament. But it is at this time that athletes feel the least mentally prepared to play.

Here are some tips on how to help your team overcome Fall Fatigue and roll into the second half of the season with energy, confidence and stamina.

It’s easy for coaches to fall into the trap of wanting to practice harder and longer in the midst of important matches because there’s a lot of information we’re trying to relay in a short amount of time. But sometimes this is more negative than positive. At a certain point in the season, more time in the gym doesn’t necessarily equal better players because as they become more physically and mentally exhausted, the quality of their reps decreases. Athletes quickly find themselves reverting back to old habits and poor form to compensate for fatigue, and this may even lead to injuries.

This is the time to think about how to maximize time in a shorter practice and focus on getting good, quality reps rather than the sheer amount.

An easy way to achieve quality is to design practices that focus more on game-like situations with a fast pace. Not only are these challenging, they’re also really fun. Sometimes mid-season practices get bogged down with slow, repetitive developmental drills that drain the team’s energy. It’s important to keep things moving at a good pace and choose drills that require the best performance in a short amount of time.

At this time of the season, players’ physical activity is at a higher amount and intensity than at other points in the season, but they often don’t adjust their schedules accordingly. It’s important for athletes to prioritize sleep so their bodies have a chance to recharge. This is another reason to aim for shorter, more focused practices – to allow athletes time to finish homework and unwind before bed so they can get proper sleep. It’s important to include mental breaks as well as physical; if athletes aren’t in a healthy headspace, they won’t be in a heathy physical place either. It’s your job to look out for their wellbeing while they’re under your care, so encourage solutions rather than creating more problems.

4. Eyes on the prize

With school, practices, travel for matches and tournaments and whatever else may be going on, it’s easy for players to lose sight of the goal. At the beginning of the season, the team is fired up and excited to be playing again. At the end of the season, the championship trophies are in sight. But in the middle of the season teams may find themselves just going through the motions, even though they are trying their best to win. It’s important to take a moment to remind your players what you’re trying to accomplish beyond the immediate match so they can harness that motivation and use it to carry them through.

During the season, players are together a lot. It becomes draining to spend that much time in the same atmosphere with the same people. Sometimes, what the team really needs in the middle of the season is a bit of time to reconnect away from the court. Whether the season is going well or not, give players a break both physically and mentally by taking a night off practice and doing something fun together. A little time to enjoy each other’s company without digs and spikes may be just the spark they need to accelerate through October.

Finally, remember this: first and foremost, volleyball is a game. Fun and smiles will go a long way – hopefully all the way to the championship match!