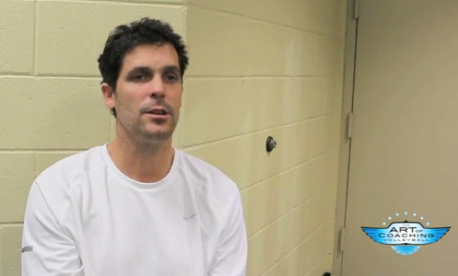 Now that club volleyball tryouts are here, Art of Coaching decided the time was right to seek out a few tips on what you should be looking for in a player. On a visit to University of San Diego’s women’s volleyball practice, we pulled Torero coach Brent Hilliard aside to get his take on that subject and two others: When club and high school coaches should begin to teach more advanced skills and what to do when young players are getting mixed messages from different coaches.

As you may know, Hilliard has top-shelf credentials. He led Long Beach State to the NCAA championship in 1991 and was the NCAA Player of the Year in 1992. Soon after, he played on the U.S. men’s indoor team that won a bronze medal at the 1992 Barcelona Olympics. As a coach, he has experience at all levels, including club and junior college.

Here’s what he had to say:

Beyond obvious stuff like height, quickness, athleticism and a big jump, what’s something you look for when evaluating a player?

How early should coaches begin working with young players on more advanced skills – like hitting away from where they’re facing?

How do you handle players who are taught something in another gym that doesn’t mesh with your philosophy?