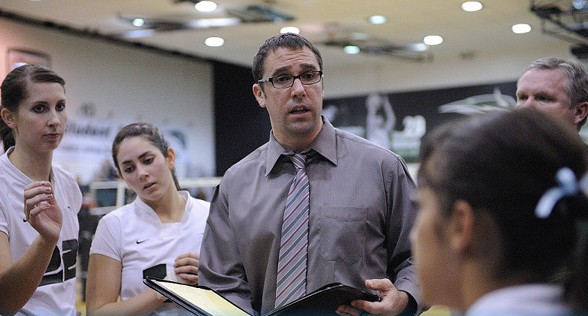 Transition offense is truly one of the most deflating elements of the game to enforce upon your opponent. It frequently shifts momentum for your team. It typically involves a greater number of players who share in the execution of the point as opposed to an ace or stuff block.

Definition: Transition offense is converting offensive opportunities created by your defense.  Our first goal on defense is to stuff block the opponent’s attack for a point. If we do not succeed in a stuff block, we intend to funnel and deflect the attack to our defenders and strike back with an effective swing. Offense generated by your defense is called ‘Transition Offense’ and it needs to be trained as such. But first I would consider it relevant to identify what makes it different from serve receive offense.

Transition Offense begins with your serve. Once we’ve established what kind of attack the opponent can generate, we will respond appropriately. This is the order of which we train our team to respond to the opponent’s attack:

Key elements to consider in your offense

The 1st consideration that effects your transition is where your setter is, and if she is able to ‘cheat’ or get out of the defensive formation. We tend to ‘protect’ our backrow setter or release her early so that she does not take the first ball in predictable situations such as free-balls and when the opponent is out of system. All of our defenders must respond appropriately to the setter’s actions. If the team identifies a free-ball, it is wise to have a play called for this occasion.

Free-balls are similar to serve receive in that we have the ability to plan ahead of time for this righteous occasion! We have a few plays that are called out and automatic once it has been identified that a free-ball is coming.  Give your best ball handler most of the court on a freeball.

Special consideration and training should address where the ball is being attacked from. When you are training transition, be sure to train your team to respond to at the very least the same sets you have in your offense.

Once ball is attacked, all players should track the ball to determine angles and timing of attack. The quality and pace of the ball dictates the approaching attacker’s timing. Give feedback in the off-ball movement, and encourage your players to watch the ball while moving into an efficient attack area. Once the ball is dug, all attackers must try and get to their attacking points as quickly and efficiently as possible. This should result in all attackers moving into their attack position or ‘load’ position at relatively the same time.

Communicate and Re-organize: Don’t take anything for granted in transition. This is the time when we must use our voices to make calls offensively and grab the attention of our setter and opponent.

What are the specific responsibilities of your defenders, attackers, and setters?

Decide what the quality of the dig should be for your team. We want the ball in the middle of the court 5 to 10ft on all hard driven balls into defense. Touches and Tips should be 3 option, pushed up between 5ft and the net.

Setters:
The setter is the key role in setting up the transition offense. She must be good at recognizing the obvious factors such as blocking matchups etc… We try to respond as quickly as possible with transition sets to the middle or right side. We will also try and expose an opponent’s receive pattern by setting to a pin where the opposing attacker is trying to get to. This is also a good time for the setter to dump.

Advanced:
- The middle should land from a block jump and transition to a different zone. The need to audible the set for the setter and other hitters to respond to what the middle does. The lateral movement along the net typically grabs the attention of the opposing blockers. We try and emphasize transitioning with our RS and MB, as few teams are in a stable, effective defensive base after they attack and cover.

Right Sides:
Basic: Keep it simple. Get good at attacking two different tempos behind the setter. Like the middle, vocalize as the setter will not see you in transition and needs to know if you are an option for her. Do you have a right side that can go off of 1ft? Do you have a lefty? Is a high ball better for your right-handed goony RS?

Advanced: Audible off of the middle, or audible into a gap of opposing blockers

Outside Hitters:
Work hard off of the ball to create a good attack angle. If limited in time, get deeper before wider. Build in some basic rules for transition such as attacking a 4 (inside set) if she handles the tip.

Patience:
Do you have a kill swing? If not, setup the opponent to become out of system and predictable. This requires patience, so train your attackers to attack a certain area of the court or player and then respond with the appropriate defense. Train your players and/or provide bonus points in live play for ¾ speed shots into the block that can be easily covered and turned into another attempt. With patience, you must have smart blocking and good coverage.

Footwork Transition
As a warm-up on a defensive day of practice, have your players block, land, and transition without a ball. This would be the time to address footwork. You can then add a ball driven into a DS so all attackers must look at the ball while moving into attack positions.

3-2-1 Scoring
Start this drill with a ‘non’ setter setting your outside simulating your team being out of system.

6 vs 6 Drill
Start with an out of system ball delivered to a player on 1 side of the net who takes a swing at the defense… Any point resulting in that first swing would count as 3 points, rewarding a huge swing vs a waiting defense. We also want to reward a well-formed block so the defense receives 3 points as a result of a block.  The next swing back on either side is worth 2 points, and finally the rally continues it is worth 1 point.

LS vs LS: Controlled court / open court
Minimum of 8 players who will attack the ball from the left side into a controlled court. Two coaches introducing balls into left back to control the pace of the drill. Using court tape force contact into defense causing long rallies. Rally score this to 5 or 7. Eventually use the same setup but remove restricted court to allow outsides to hit anywhere. Add full sixes on both sides building into a 6 vs 6 competition with emphasis on the outsides.

Positional Battles: 6 vs 6
MB/RS vs. MB/RS or any combination. Only allow for point scoring opportunities with kills or blocks as a result of any particular position you designate. We often use MB/Pipe vs. RS/OH, you can custom make your match-ups based on your talent or opponent.

1-on-1 coach controlled: 4 players
MB vs. MB with two setters and coaches. Coach tosses to the setter who sets her middle a 1. Opposing middle attempts to block, once she lands, the other coach (or player) tosses to the setter so the blocker must transition and attack a 1 back at the other middle. Coaches control the pace of the drill to either speed up or slow down. Move your setters along the net to force the opposing middle to ‘front’ the other middle prior to her block attempt.

2 Middle Drill: 3-9 players
Coach tosses into 1st middle who passes for the other middle who drives in and audibles a set. The middle attacks, lands, and passes for other middle who must attack in a different zone than the one they are standing in at the time of the pass. Continue the drill for 6 attempts. Add block on other side.