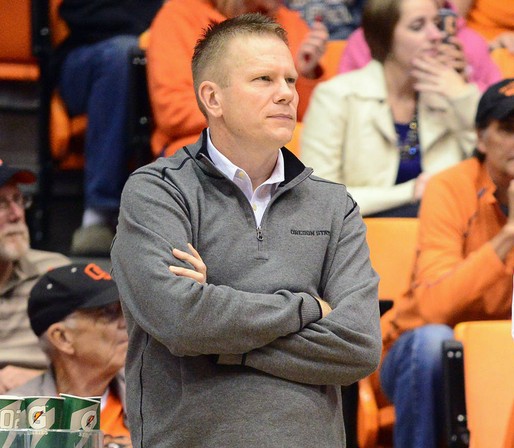 Mark Barnard recently doubled down on his volleyball career by accepting the head coaching position of the Australian women’s national team while retaining his job as associate head coach at Oregon State.

Ahead is a lot of work and a whole pile of frequent flyer miles for the native of Sydney, who makes a return to his homeland after serving as head coach for the Aussie women’s national team from 2001 to 2004. (Last time around, he guided the team to its first qualification for the FIVB World Championships in more than 20 years.)

Along with the challenge of returning to the highest level of coaching, there are other positives, including the comfort of clear communication.

“Everybody will understand me when I’m talking,” he says with a laugh, noting that his Aussie brand of English occasionally stumps people in the States.

Oregon has been home for Barnard and his family (wife, Louise, and their two children, Isabella and Alexander) since 2005, when he accepted the job to be Terry Liskevych’s top assistant at OSU. He has been a regular presenter at Art of Coaching Volleyball clinics, and he is well respected by both peers and players for his knowledge of the game and his ability to teach it.

"Seldom have I found anyone in the game who has such great technical knowledge in regards to scouting and the use of video and different software and hardware systems. Mark has a physics background, and he's really good at those things," Liskevych says. "There’s no doubt in my mind that he could be a head coach at any college in America. We’re fortunate to have him here as an associate head coach."

As the once and future Aussie coach prepares for dual assignments, Art of Coaching has decided that this is the perfect time to release what we’ll call “The Best of Barnard” – five coaching tutorial videos which will be posted throughout this week. We also pulled Mark aside recently for a quick Q&A to find out a bit more about the challenges he’ll face and the advice he has for other busy coaches.

AOC: Congratulations on your new job, Mark. How are things different with the Australian women’s team since you left 10 years ago?

M.B.: Back then, it was a year-around program – like a college program, except we trained a lot more because there were no restrictions. We traveled a lot from May through September. We kept a base of younger players to train full time, and then a lot of the players would go play in Europe, which is very much the way the men’s (national team) model is in Australia now. The women’s team is very different now. The players on the team all work; they’re normal people – accountants, physical therapists … women with careers who are playing volleyball as well.

AOC: It’s going to be a busy year for you. In your experience, what are some of the keys to prioritizing when you know you don’t have time to cover everything?

M.B.: I actually asked Terry recently what skills he thinks will improve the team, and which of those skills can be worked on without a lot of direction – because I won’t always be there when they’re practicing. One we talked about was serving. I think there’s a lot of room for improvement in serving. Serving can be a very quick way to get a lot better. And that’s something you can do without the coach. The ability to do things like serving harder or serving lower to the tape, serving deep corners, serving short – most of those things are up to the players to go and practice.

AOC: How about blocking? Are there ways to improve what the blockers are doing in a fairly short period of time?

M.B.: [In recent years], this team has had a basic system where they’ve blocked against teams the same way … with the outside blocker starting a meter in from the antenna. But we’ll be working with blockers to start farther in – two to three meters inside the antenna – so they’re able to block the middle and then move to the outside quickly. So we’ll mostly be working on the footwork and getting used to moving from farther inside the court rather than staying outside.

AOC: If you have limited time with a team, does it change your coaching strategy?

M.B.: I think you don’t want to go in there and create a lot of complex systems for them. Some of the plans I have may have to be toned back because simple may be a better option at this stage.

M.B.: I think so. You have grand plans and, like any coach, you want to achieve those immediately. I’ve seen a lot of club teams try to play a very fast offense. They pass the ball pretty quickly, and the sets to the outside are a lot lower. But your room for error [with a fast offense] is so much greater. I wonder sometimes if just being able to put the ball up and take a swing at it and reset yourself in a defense is the best way to do it.

AOC: That again speaks to what can realistically be accomplished in a certain amount of time.

M.B.: That’s right. I think when you’re taking over a team, you just want to put your imprint on the team, but I think that sometimes you get a little overactive and you start implementing more than the players can handle. If you had them every day, it might be fine. But with a limited amount of time, you may have to dial back your thoughts on how complex you can be. As you get more time with them, you can increase the complexity.

AOC: At the international level, no matter how complex your system is, you’d better have two left-side hitters who can put away high balls, right?

M.B.: That’s absolutely key. I know we have one in Rachel Rourke (former Oregon State standout), so that’s a starting point. But you can get into a situation where, if you only have one scorer and you start setting her everywhere as she goes around the court, then pretty soon your simplicity becomes very simple … too simple. About 10 years ago, Croatia had a very good team, and it was just from setting one player – Barbara Jelic. They set her everywhere – all across the front row, and all across the back row. She got 60 to 70 percent of all the sets. … But it’s very difficult to have a one-person band. You really need to develop other hitters.

AOC: Is shaking up your schedule and changing your environment good for your growth as a coach?

M.B.: I agree very much with that. If I was to look back and assess myself as a coach in 2004 and then look at myself now, I wouldn’t be radically different but I would certainly be different. There has been a lot of learning the last nine or 10 years that will make me a better coach now.

M.B.: I think one thing I understand is that these players are not training all the time, so getting the best out of them doesn’t mean pushing them until they break. I don’t want to be someone who is adding more stress to their situation.

M.B.: I am. I’m excited. At the end of July or early August, on the last of the Grand Prix weekends, I might be going, “What the hell was I thinking?” But I am looking forward to it. It’ll be interesting, exciting, challenging – all of those things. It’ll be a great experience, and I think it will definitely help me in my coaching.