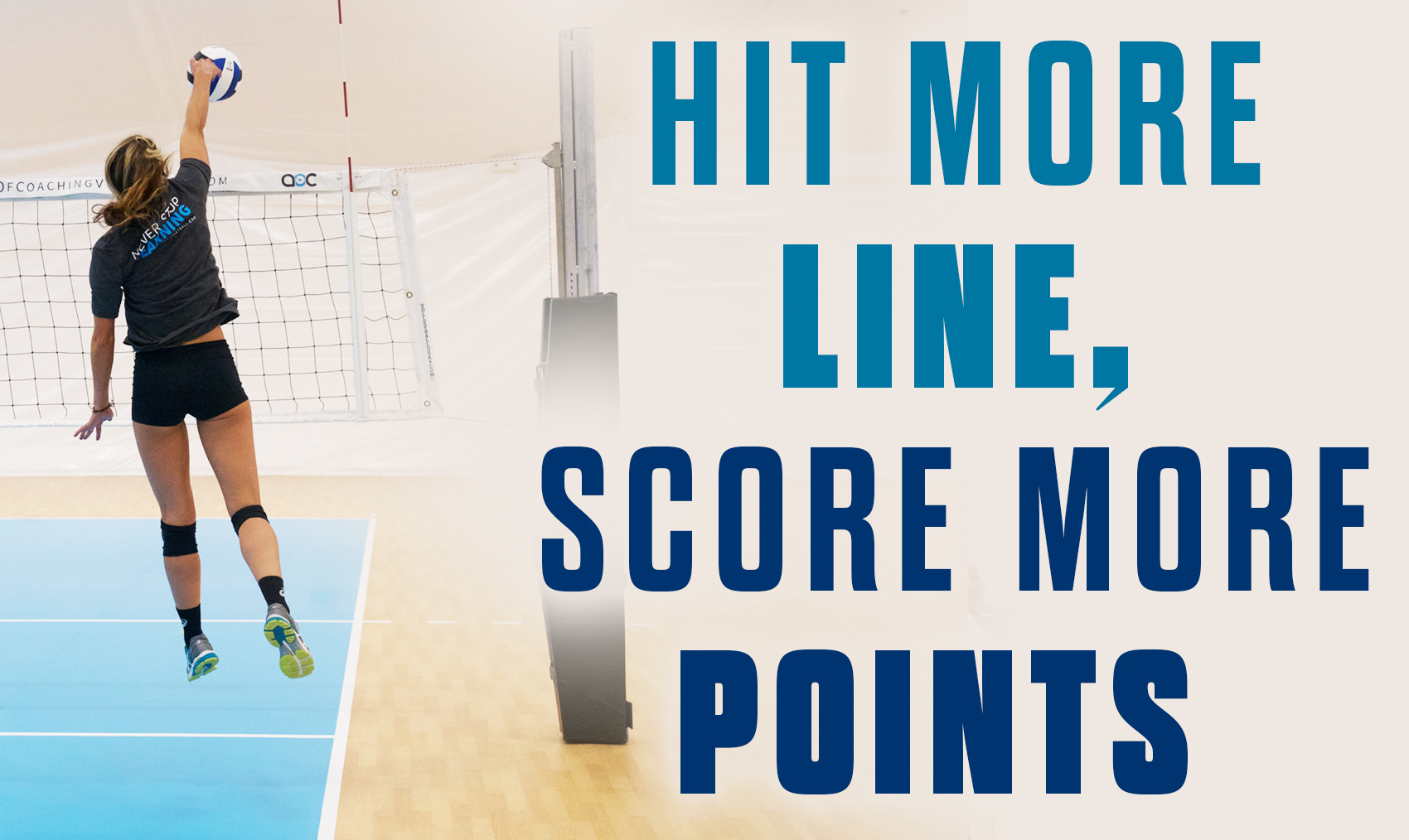 “Why do we keep hitting cross court when there’s always someone there to dig it?”

I’ve been asking myself this question a lot lately, and I thought about it again after a recent match played by my 17s team, when the opposing libero gobbled up ball after ball from our left-side hitters.

I think there’s more than one answer. Here are two:

Let’s look at some data. The diagram on the right is a shot chart from a recent match played by my 17’s team. Notice that our left-side hitters hit nearly every ball cross court into either Zone 5 or 6. Only one hit went down the line into Zone 1, even though that area would have been more likely to result in a kill.

Is this unique to my team? Definitely not. From what I’ve seen in many years of coaching, high school and club teams at all levels hit too few line shots.

Analyzing what’s wrong with our hitting training, I think the main problem is that our drills aren’t resulting in enough line reps. In our gym, we have traditionally worked on hitting with standard hitting lines – pass to the setter, set, hit. The flaw, I think, is that we have made it a GOAL to hit Zone 1, not a REQUIREMENT. That means only 2 hits in 10 are going down the line.

Taking an educated guess, I’d say it takes at least 200 swings for a player to develop the ability to hit a spot consistently. At least! Honestly, that number is probably low. It might be 500 or more.

But let’s say a player can make measurable improvement with 200 reps. Keeping in mind that my players typically hit just 20 percent of their shots to Zone 1 (2 in 10), it would take a whopping 1,000 sets to hit line 200 times. That’s a lot of practice time.

My solution: Run a drill where hitting line is mandatory, regardless of the set quality. Most players can hit cross court with their eyes closed, so putting 80 percent of your drill time into something you’re already good at is not efficient. Fix the pothole!

With line hits required on every set, the math looks better. Now about 8 of 10 balls are going into Zone 1. That means you only need 250 sets to get 200 line shots, not 1,000. This cuts the training time to 1/4, and that could reasonably be accomplished in five practices with 50 hits per practice.

Remember, not every attack has to look good. Tell your players to do whatever it takes to get the ball to Zone I. On a bad set, that might mean using both hands to push the ball to that spot. Or maybe bumping it there. The point is, just do it. The outcome is more important than the technique.

Here’s another important question to consider: Why do we face cross court when we attack from the left side? It doesn’t make a lot of sense. Facing cross court means we’re also facing the libero.

But here are two realities:

With this in mind, we changed from the standard angle approach and lower set (see cross-court approach diagram below) to a more straight-ahead approach and a higher set (see line approach diagram below). The problem with the lower set that is often run with a more angled hitting approach is that the ball has a faster lateral speed from the setter’s hands to the hitter. This requires precision timing. Frequently, the timing is off and the hitter either miss-hits the ball or takes the easy way out and hits cross court. 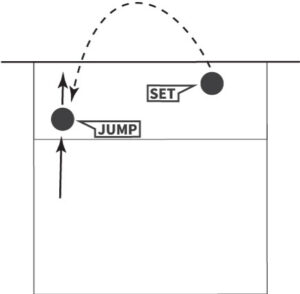 Set the ball higher and more inside. Reduce Lateral speed. With a straighter approach and a more vertical set, the hitter only needs to time when to jump rather than when and where since the ball is not travelling horizontally very fast. 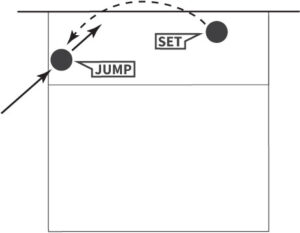 Fast set has high lateral speed. This is the typical approach angle. The set goes faster in an attempt to make the middle blocker late, causing a poorly formed block. This ball must be very precisely set - otherwise, the hitter will miss-hit the ball.

With a down-the-line attack approach and a set that is both more vertical and farther inside, the timing is easier. There’s more room to hit between the blocker and the pin, and the swing isn’t as difficult as going cross body. Another advantage is that line diggers will likely have trouble controlling the ball because they haven’t practiced playing defense against this type of approach angle.

Results from this training

We’ve gone through two phases of hitting line. After our early season work on line hitting, the team did pretty well at the first tournament. But then with a lack of enforcement during my practices, we regressed to hitting cross court. So we made another concerted effort to hit the line.

In the following shot charts, you can see the change: 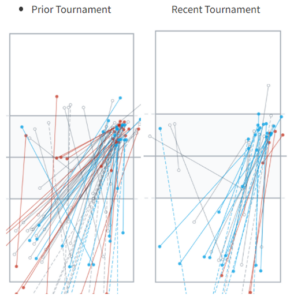 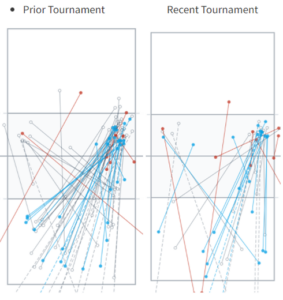 During the second tournament, we also did hand tracking so we could see what the intended direction of the hit looked like. It was close – about 55% cross court and 45% line. This is much higher than my goal of 2 to 1. The kill rates were also way up since line digging is hard and the ball can easily go to undefended space. Kill rates increased between 5-10%, which is huge.

We try to include line hitting incentives whenever we can. In a four-person Columbus drill, you can only score when you hit a line shot. We do a 3-person receive drill where there is a setter. To complete the drill, we must hit 5 down the line on the left and right side each. It’s key to keep pushing the players in the direction you want. I’m sure you can find creative ways to incentivize your players to hit the line.

As we know, most coaches follow the lead of what everybody else is doing. To a point, this is fine. We learn from each other. But I also think that we all need to stretch ourselves and experiment with new ideas so we’re not so predictable.

Finding new ways to train left-side hitters has been one of my experiments. It will take some time to evaluate how well it’s working but, as I mentioned earlier, I think my teams have wasted too much time doing stuff they already know how to do. If my hunch is correct, we won’t be sacrificing anything by hitting more line and less cross court in practice. And I can’t help but think we’ll get a lot better at something we haven’t done very well, which should position us to score more points and win more matches.

Kyle Mashima is a high school and club volleyball coach who founded Rotate 123 LLC to create software tools for volleyball coaches that would increase their insights and improve their team’s performance.