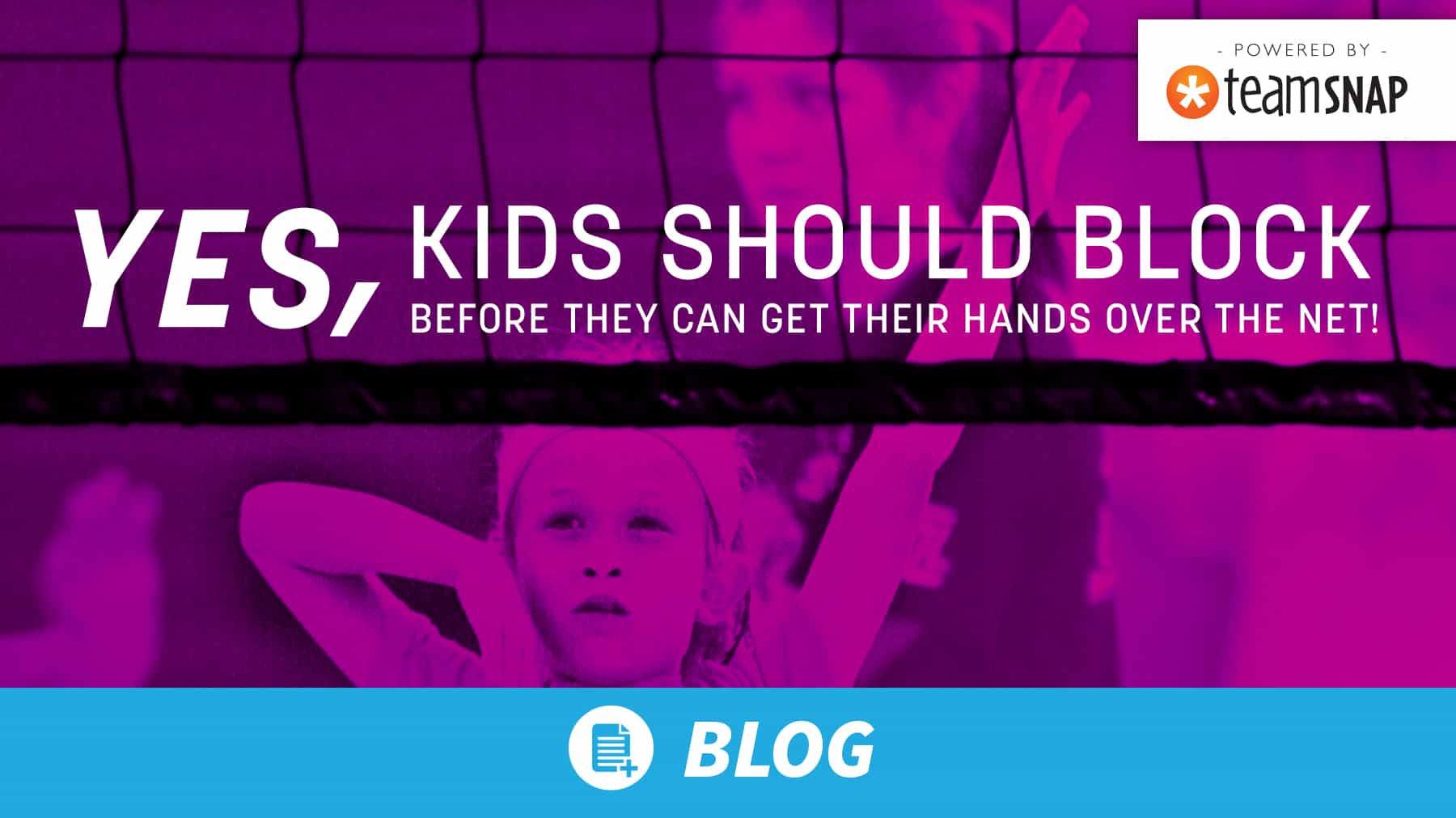 There’s an ongoing debate among coaches regarding the necessity of teaching young players (14 & under) blocking technique, when both their young age and generally small stature make the activity more of a hinderance than a tool. At that age they usually don’t have the speed required to reach and effectively block pin attacks, and their hands likely wouldn’t reach over the net even if they did. For younger teams, the blocking attempt significantly slows their efforts to get back for a full approach, and it offers very little promise of payout. (Which is to say, their odds of winning the point on a block are not very good.)

But my personal experience with this very question has taught me that if players hope to be successful in this sport long term, they have to be committed to understanding the reasoning behind all of the different skills, even if they can’t yet do it themselves. Perhaps this is best explained through a little anecdote:

Though I am now a collegiate volleyball player as well as a certified coach, I was not very good at this sport when I was 13 years old. The idea of me ever playing volleyball at a high level was laughable, but despite the odds it was what I really wanted to do. At 13, I was awkward, uncoordinated and my height was much more of a curse than a blessing. (I’m 6-1.) I was put in the middle by my coach at the time primarily for my height – as many are – and told that my primary job was blocking. I had only a vague idea of what blocking really was, and I don’t think I’d ever seen it done properly, but I was lucky and my coach’s specialty was blocking technique. He walked me through the motions, explained the timing, and taught me what I was aiming to do. He knew that a lot of my efforts would be for little gain because at that age our opponents weren’t hitting over the net frequently enough to block anyways. But he took the time to really teach me what blocking meant.

I went a good half of the season without blocking anything, and then suddenly… I did. We were at a small tournament with few teams, so we ended up playing a team of all boys, which was really exciting for us because it felt like a real challenge. They had one boy in particular – a middle – who was virtually unstoppable because of his height and strength. And then, in the middle of the really tight match, I stuffed him. I will never forget that block because it was my first ever, and it caught me completely off guard – as well as my coach, parents and the boy himself. I didn’t expect to actually block him. I was just doing the motions that my coach had taught me because my job was to do them. But after that first block, I finally understood all the work I had been doing. I didn’t see before how I was being any help to my team, but after that block I realized what an important asset I could be. It felt so gratifying to see all the work pay off when we needed it most. My coach was patient in teaching me, and teaching a 13-year-old to block is like teaching someone to draw a house one line at a time; they may not be able to see the house at first, but with trust and the willingness to learn, they will soon discover that it is indeed a house.

This is all to say that, yes, at 14 or younger, it’s very unlikely that blocking will do any good as far as scoring points for your team. But at that age the wins and losses are secondary to the understanding of the game. Young players need to learn the correct techniques for all of the skills and begin to understand why we do it one way versus another. They’re not going to be successful at everything, but they will grow to be successful in the future if they have a solid base to work from.

To this day, blocking is my favorite part of volleyball. I never get tired of it. I’m now considered a blocking coach for the high school and club teams I coach because I love it that much. And I honestly think a lot of that love comes from that first block. It was the first time volleyball really clicked for me, and I was able to truly understand why my coaches said the things they did.

Of course, this goes for all skills, but I think blocking exemplifies this better than the others because the results are not instant. Blocking should be taught at those younger levels because doing so will prepare them for when the game gets faster, they get stronger, and the competition gets harder. If you don’t teach them when they’re young, it will be a completely new concept they’ll have to learn when they get to the next level of the game. The key is exposure and explanation. If they can understand the game when they’re young, they’ll be much better players when they’re older.