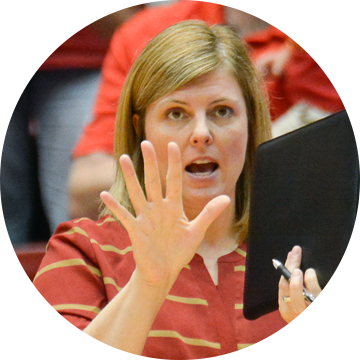 Christy Johnson-Lynch enters her 13th year as head coach at Iowa State having rewritten the history of the Cyclone volleyball program. The program she inherited on Dec. 17, 2004 is unrecognizable compared to today’s situation.

There are many ways to define Johnson-Lynch’s tenure at Iowa State. There is the winning. She enters her 13th season at Iowa State with a 246-123 record in her career. The Cyclones are one of just 11 programs nationally to appear in each of the previous 11 NCAA Volleyball Championships. She has guided the Cyclones to the NCAA Regional Semifinals three times and to the Regional Final on two occasions in 2008 and 2011.

Johnson-Lynch’s 141-75 record against Big 12 opponents is incredible in many contexts. In ISU’s nine Big 12 seasons before her arrive, ISU had only picked up 13 conference wins compared to 167 losses. The Cyclones had anchored the Big 12 standings in seven of those nine campaigns. In 2009, alone, Iowa State won a program-record 17 Big 12 matches en route to a school record 27 victories on the season. In ’09, Johnson-Lynch was named Big 12 Coach of the Year.

Iowa State has won 20 matches in a season six times under Johnson-Lynch, a feat only accomplished three times in the 15 years before Johnson-Lynch joined the Cyclones. To go with the 2009 Cyclones’ 27 wins, the 2011 Cyclones earned 25 wins and the school’s highest NCAA Championship seeding ever at No. 4.

2015 saw Caitlin Nolan become a two-time All-American, as she added to her 2014 Third-Team honor with Second Team All-America recognition, as the libero also earned All-Region honors and All-Big 12 First Team recognition to go with winning Big 12 Libero of the Year again. Nolan wrapped up 2015 with three Big 12 Defensive Player of the Week awards and 5.78 digs per set, the most in program and Big 12 history.

Prior to Nolan, Kristen Hahn was the latest of an outstanding line of liberos to come through “Libero U”. A three-time All-American, All-Region and Big 12 Libero of the Year to go with two unanimous All-Big 12 First Team selections and a Big 12-record 17 Defensive Player of the Week awards, Hahn’s work in the ISU program helped her become the first Cyclone to represent USA Volleyball’s Senior National team in May 2014.

Mass is one of three Cyclones to earn First Team All-America honors under Johnson-Lynch. Victoria Henson redshirted her first season at Iowa State, but eventually became one of the most feared outside hitters in the country in spite of being under six-feet tall and being a First Team honoree in 2010. In 2011, setter Alison Landwehr earned First Team honors through the guidance of Johnson-Lynch, a two-time All-American and a national champion setter in her playing days.

With the success has come the Cyclone Nation. Hilton Coliseum is no longer just the home of elite basketball and wrestling programs, as the ISU volleyball program boasts one of the top game-day environments in the country thanks to Johnson-Lynch and ISU’s success.

In 2013, Iowa State averaged its second-highest season attendance in school history, with 2,700 fans per match entering Hilton Coliseum, second-most in the Big 12 and 12th in the NCAA. The past three seasons, Iowa State has broken its season tickets sales record.

In 2009, ISU saw one of the most memorable events in the school's athletics history take place when a state of Iowa record 10,203 fans poured into Hilton Coliseum to see the eighth-ranked Cyclones face 10th-ranked Nebraska. It marked the fifth-largest crowd in the country in 2009.

Iowa State’s successes have not been limited to the court, as Johnson-Lynch’s Cyclones have also been stars in the classroom. The Cyclones have put 52 student-athletes on Academic All-Big 12 teams including a program-record 10 honorees in 2011 when eight players made the academic first team. Iowa State is the only Big 12 school to ever put 10 student-athletes on academic all-conference teams in a single year.

When Johnson-Lynch was tabbed to become Iowa State's 10th head volleyball coach on Dec. 17, 2004, the Cyclones landed one of the nation's brightest assistant coaches. Endowed with an enthusiastic approach, a determination to build a strong winning program and one of the most impressive résumés of any assistant coach in the country, Johnson-Lynch took over in Ames after an illustrious playing and coaching career at Nebraska and Wisconsin.

Johnson-Lynch's playing and coaching career has brought her in touch with some of the game's greatest coaches, including Terry Pettit, her coach while playing at Nebraska, current Nebraska head coach John Cook and Wisconsin head coach Pete Waite. She also has international coaching and playing experience.

Johnson-Lynch coached in the 2000 NCAA Division I Championship match and has been on the sideline in four regional finals (one at ISU; three at Wisconsin).

Johnson-Lynch's experience in the NCAA Tournament goes back to her collegiate playing career at Nebraska. She earned All-America honors for the Huskers in 1994 and 1995. Johnson-Lynch was the starting setter on the 1995 Nebraska team that won the school's first NCAA championship. The Huskers made four NCAA tournament appearances and won three Big Eight titles during Johnson-Lynch's collegiate career.

In her junior and senior campaigns in Lincoln, Johnson-Lynch led Nebraska to a 63-2 mark, the second-best winning percentage of any setter in Nebraska history. The Huskers were a perfect 24-0 in Big Eight play during that span and captured two Big Eight crowns.

A 1996 graduate of Nebraska with a bachelor's degree in education, Johnson-Lynch spent one year coaching at Millard North High School in her hometown of Omaha, Neb. She also served as a coach in the River City Juniors Volleyball Club program for two years.